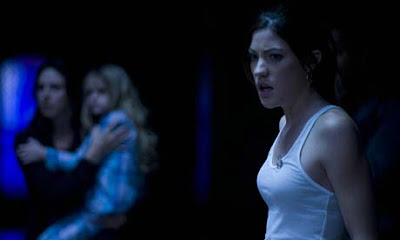 ** SPOILERS, BUT DO YOU REALLY CARE IF I SPOIL QUARANTINE? **

The most upsetting part about Quarantine is that it started off well. A comely reporter (Jennifer Carpenter) and The World's Most Dedicated Camera Man (Steve Harris) are sent to do a piece on a local LA fire department, interview the fire fighters, and tag along as they're sent out on a call.  There's some expected sexual flirtation between the reporter and the firefighters, mainly Jay Hernandez, and the behind the scenes at a fire station was interesting. It's a very good first act, a nice set up that could have gone into any manner of interesting directions. Instead, they get called into an apartment building full of zombies. The denizens of the apartment building, comprised of familiar faces and character actors from lots of different movies and TV shows, are all infected by some mutated form of rabies that turn them into zombies. Rabies! Before long, everyone is quarantined into the apartment building and are left to fend for themselves as everyone infected with the super rabies get zombified. To their credit, the actors heroically work their asses off to sell the terror. Meanwhile the movie gets bleaker and more pointless as it continues.  The single camera verite-style cinematography, done well at first, goes beyond Cloverfield-level ludicrousness. Camera man Harris keeps the camera running long past the point of believability. As the zombies keep popping in and out of frame, Harris still makes sure to get a close up of each one as he's running for his life in terror. Quarantine hammered home its most important lesson: Even if zombies are chasing you up the stairs and into smaller and smaller spaces, don't drop the camera. Whatever you do - Do not drop the fucking camera! Once it's dropped, it's all over.
Posted by Back of the Head at 2:53 PM