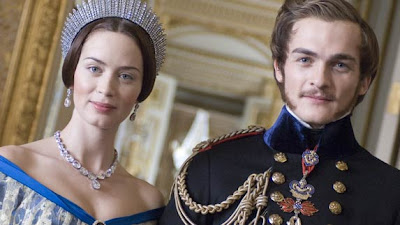 The Young Victoria tells of how Emily Blunt became Queen of the United Kingdom of Great Britain and Ireland in 1837 and how she met the love of her life Prince Albert.  Just call it Victoria Begins. Concerned primarily with the political intrigue of various parties positioning themselves to gain the most advantage when the 18 year old Victoria ascends to the throne, what's missing from The Young Victoria is any real tension. Victoria begins as a sheltered princess under the domineering hold of her mother the Duchess (Miranda Richardson) and her consort Sir John Conroy (Mark Strong, looking like he wants to gut Blunt with a saber and leave clues for Sherlock Holmes to solve), who want her to sign away her powers to their regency. From far away Belgium, King Leopold plots to send his nephew Albert to England to seduce Victoria.  Meanwhile, Victoria's favor and trust is gained by Lord Melbourne (Paul Bettany), who politics his way into Buckingham Palace as her chief adviser.  It all plays in a very stately, staid manner, with almost everything taking place in exteriors and interiors of royal palace grounds. There's a love story between Victoria and Albert which is the heart of the picture, but that involves her sending him back to Belgium for most of the movie and writing him letter after letter about how awesome Bettany is before Albert gets sick of it and comes back to England. Then he marries her, they have one fight, he saves her life from an assassin, and then the movie's over. All of Victoria's adversaries seem to just disappear into other rooms of the palace, while Bettany just suddenly stops scheming and has a change of heart.  The most interesting stuff of Victoria and Albert's story ends up on the title cards before the end credits, describing what Victoria and Albert did together after the events of the movie. Blunt has occasional moments of radiance, but one can't shake the feeling the real Queen Victoria was more interesting than the movie makes her out to be. Jim Broadbent made for an amusingly cantankerous drunk King William in a couple of scenes. The look on Meryl Streep's face when her former assistant is crowned Queen of England would have been priceless.
Posted by Back of the Head at 3:52 PM