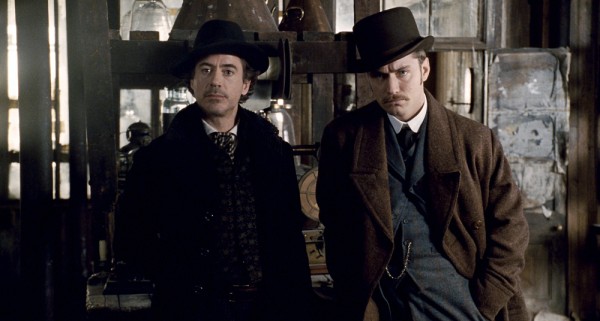 ** SPOILERS **
Sherlock Holmes has what turns out to be a pretty funny credit at the end that says something to the effect of, "Sherlock Holmes was created by the late Sir Arthur Conan Doyle. His adventures are available in books." No foolin'? Honest and true? There's a lot to like in Sherlock Holmes, a smart, thoroughly entertaining re-imagining (sort of, much of this depiction of Holmes, such as his wardrobe and bare knuckle boxing, are actually found in Doyle's books) of the venerable detective and his faithful sidekick Dr. Watson, as they uncover a sinister supernatural plot in an awesomely designed Victorian London on steroids. The theme of Holmes, the man of utmost reason, putting his deductive science against black magic was effective. You simply cannot go wrong with Robert Downey, Jr. playing the smartest, fastest talking man in the room.  His Sherlock Holmes is the most entertaining lead character in a Hollywood action picture since... his Tony Stark in Iron Man. Jude Law plays Dr. Watson, painfully self-aware that he exists to provide Holmes with exposition and, more importantly, a straight man. ("Straight" is relative. The movie toys with the ramifications to their bromance caused by Watson's intention to marry. A woman.)  Turning Holmes and Watson into action heroes lead to the coolest aspect of Sherlock Holmes: Downey's ability to use his deductive powers to create hand to hand combat strategies and then implement them in bone-crushing slow motion. Downey showcases this ability twice in the first hour, most memorably in 19th century London's version of Fight Club, yet he doesn't use it in his final mano e mano clash with the villainous Mark Strong atop the still-under construction Tower Bridge. Strong was also poorly served; he begins as an intriguing mystical villain for Downey but then is relegated to the shadows until the very end. We don't get to know Strong's evil Lord Blackwood at all. Holmes does make up for this with a novel take on the great detective explaining how he solved the case, which had Downey doing just that in the most smug, self-satisfied manner possible.  Shoehorned into Sherlock Holmes is Rachel McAdams as an American thief and love interest for Downey. McAdams is startlingly unconvincing and glaringly out of place. She seems to only exist to set up the sequel, which brings Professor Moriarty in as Holmes' adversary. Even while bending over backwards to have the details of the plot make sense, there are some logical leaps and holes in the third act (Law gets himself blown up, ends up hospitalized, is out with a cast a day later, then the cast is gone and he's 100% brawling with thugs again), but Sherlock Holmes compensates for it with rollicking action, sly wit, and pure entertainment. It's no shit, Sherlock.
Posted by Back of the Head at 10:49 PM