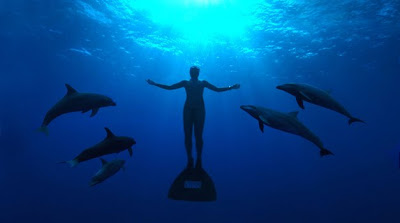 Remember the episode of The Simpsons when Lisa freed Snorkey the dolphin and Snorkey lead the dolphins to attack the people of Springfield and drive them into the sea?  The Cove reveals why the dolphins were so pissed off.  Turns out they were right to be vengeful. In all seriousness, the stunning documentary The Cove dramatically uncovers the real-life, wholesale slaughter of bottle nosed dolphins that has been going on for decades in Taiji, Japan ("the little town with the big secret"). Every year the waters of this tiny cove in Taiji run red with dolphin blood. 23,000 dolphins are slaughtered for their meat there, with some live "show" dolphins being sold for upwards of $150,000 each.  The man standing against this slaughter is Ric O'Barry, who is also responsible for the industry of holding dolphins in captivity by marine parks like Sea World in the first place. O'Barry was the man who personally captured and trained the four bottle nosed dolphins who played the role of Flipper on TV in the 1960s, creating the world's desire to swim with captured dolphins and see them flip through hoops at Sea World. For the last 35 years O'Barry has been trying, with little success, to bring down the multi-million dollar industry he helped create. O'Barry's partner in crime (according to Japanese law) is filmmaker Louie Psihoyos, who recruited a world class "Ocean's Eleven" team of scientists and technicians to successfully record the gruesome goings-on in Taiji, using high definition cameras and audio equipment, including cameras hidden in artificial rocks, mounted on dirigibles, and using Paris Hilton sex tape-style night vision. The filmmakers' Mission: Impossible-style operations succeed in shedding light on this tragedy where even famous (and hot) protesters like Hayden Panettiere and Isabel Lucas (who are shown getting arrested for swimming out to the Taiji cove in 2007) failed. There is an incredible amount of information in The Cove, enough to fill anyone with outrage about how nothing is done to protect bottle nosed dolphins from the creepy, cartoonish Japanese fishermen slaughtering them and eating their sweet meat.  (It turns out the fishermen are poisoning themselves and anyone else who eats the dolphin meat, which contains 2000 times the World Heath Organization's set toxic levels of mercury.)  Those fisherman will get the painful death that's coming to them in the end, but the dolphins can't afford to wait that long.
Posted by Back of the Head at 9:32 PM