The Simpsons 20th Anniversary Special! In 3D! On Ice! 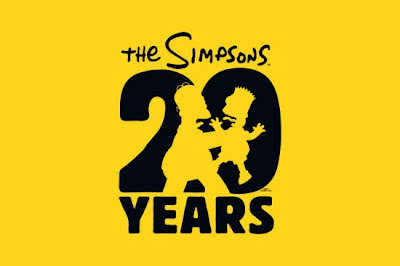 What a terrific documentary on The Simpsons by Morgan Spurlock! Not at all what I was expecting, but turned out much better than what I was expecting - some sort of clip-filled, generic self-congratulatory tribute. This was a wonderful and unique look at the impact and legacy of the greatest television show in history.

Spurlock did a superb job capturing an overview of the cultural/global impact and popularity of The Simpsons while touching on some of its controversies and the criticisms towards it.

Of course, Matt Groening was right there happily yakking away about his creation, but it was cool how Spurlock showed all the street names in Portland, Oregon he took the names of the characters like Reverend Lovejoy, Mr. Burns, Ned Flanders, and Sideshow Bob Terwilliger from.

It was also nice (wait, is "nice", the word I want? They're not exactly handsome, as expected) to put faces to Simpsons writers like David Mirkin, Sam (the first showrunner booted off the show but retaining executive producer credit and earning millions for life) Simon, and Mike Scully. Of course, Conan O'Brien had to be interviewed and I'm glad he participated. (Conan couldn't have known then how tempted he might be today to accept that job writing for Mr. Burns for $1, the way NBC is dicking him around). And there must be a few thoughts from "Hollywood Legend" James L. Brooks, of course.

I also enjoyed hearing from Sting, representing the hordes of guest voices over the years. "The Simpsons made my career..." Hugh Hefner was also interviewed for the special, boasting about Marge on the cover of Playboy. How many copies does Moe own? ("There's nothing sexier than still pictures of naked women in a magazine!") Moby's love and remixes of the "Mr. Plow" song were fun.

I'm a pretty huge Simpsons fan, but tattooing my entire torso with he Simpsons characters is one level of fanaticism I won't ever reach. Still, if I ever did get a Simpsons-related tattoo, the Stonecutters symbol the French girl has would be my choice.

I hope the homes of The Simpsons collectors, especially the one in England, never burn down. They'd probably kill themselves.

Spurlock in Brazil, talking to Brazilians about why they're still mad at the Brazil episode, while poking fun at them, was a brilliant move. That was one fashionable speedo Spurlock wore in Copacabana Beach. There should have been monkey gangs and rats painted to look like Skittles chasing him.

The Comic-Con "Simpsons Idol" footage showed that one guy who did Homer's voice so perfectly, if they replaced Dan Castellaneta with him, we'd probably never notice. Castellaneta must have shit his pants when he saw that guy.

The Simpsons actually watching the special and complaining that it was not in 3D, nor was there ice skating, was pretty good.

Really, my only criticism is that Spurlock's documentary should have been twice as long and ought to have been in theaters. But, as Marge said a couple of seasons ago, "No more Simpsons Movies! One was enough!"
Posted by Back of the Head at 9:21 AM