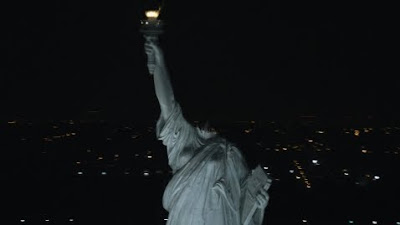 
I'm not sure what the bigger conceit is in Cloverfield: The indestructible handheld DV camera that never runs out of tape/battery power or the fact that we're told in the opening titles that the footage we're about to see was recovered by the military in the part of Manhattan "formerly known as Central Park." We're meant to buy that the movie we're seeing is the complete, untouched video footage of the recovered camera but I don't buy it. Seems to me that after finding the camera, some editor in the Army cut the footage and was really, really concerned with Rob and Beth's lovelife, all the way down to the final bookend shot spliced in of the two doomed lovers having "a great day" in Coney Island. I'll bet after seeing that footage, there wasn't a dry eye amongst the generals watching Cloverfield at the Pentagon.
Despite these conceits, or maybe because of them, Cloverfield turns out to be a very entertaining "ordinary man on the street POV" of a giant monster attacking New York City. It's a novel approach that works well because of the realistic performances of the cast, with the filmmakers utilizing well-timed, smart, careful reveals of the monster(s). They (and by they, I mean "whoever in the military cut the footage together") did an effective job drawing the audience in to the story of Rob receiving a going away party from his friends, which is interrupted by the inconceivable. (Rob's going away to a great new job in Japan, which movie-historically has had more giant monster attacks than anywhere but strangely doesn't here.)
The relationships between Rob, Beth, his siblings, his best friend/ersatz camera man, and the random girl they barely know who get caught up in the disaster were compelling enough to get us invested in their lives. We see the strings being pulled clearly as Rob and friends defy all logic to rescue Beth from her midtown apartment, right in the middle of Giant Monster Central, but the cast is honest and good, the conceit works, and we buy it. It's also a good thing Rob doesn't know anyone who's unattractive because it sure would have been a drag watching ugly people try to survive repeated clashes with monsters.
I had no trouble buying any of the big ideas, like a giant creature destroying half of New York or Rob's need to save his girl or his friends deciding to come along or even Hud filming the entire experience. As someone who's been finagled into his share of filming stuff, I liked the arc of Hud not wanting the job of recording testimonials turning into his need to keep recording, as seeing all that tragedy through the lens of a DV camera somehow allowed him to divorce himself from the reality and cope with what was happening better. I also liked that that desire to keep recording ended up being Hud's undoing when he learned the monster wasn't ready for his close up.
Some of the details were strangely off though: Rob makes a big deal of looting an electronics store to find a replacement battery for his cell phone, yet the two girls with him made no effort to loot a store to find shoes they can walk/run with after they'd committed to making their way to midtown to save Beth. When the foursome are attacked by the smaller monsters in the subway tunnels and seal themselves off in a room, Rob finds a pipe or metal rod to force open a vending machine, yet he doesn't think to bring it with him as a weapon when they venture back out. When they encounter the military in a department store on East 59th Street, Rob won't shut up about how they need to save Beth; meanwhile their friend Marlene who's with them has been bitten by a monster, is clearly bleeding and dying, but they never think to mention it until she cries red tears and starts painting the walls with her blood. But the single most ridiculous thing Cloverfield did was dispose of Mike Vogel 20 minutes into the movie. What the hell was that?!
Here's how the ending of Cloverfield should have played out: In Central Park, Hud points the camera upward and gives us a clear shot of the monster. Then from behind the monster leaps Mike Vogel, with blade in hand Beowulf-style, come to slay the monster. Vogel grapples the monster's neck, drives his blade into its skin, then its eyes, the monster roars a death knell, and falls. Vogel then hands the Hud's camera back to him, locks eyes with his brother Rob, gives him a heroic nod, and runs off. The last shot is of Mike Vogel, blade in his teeth, heading off to singlehandedly kill the remaining monsters all around the city. I think we can all agree that's the ending they should have gone with.
Posted by Back of the Head at 5:08 PM