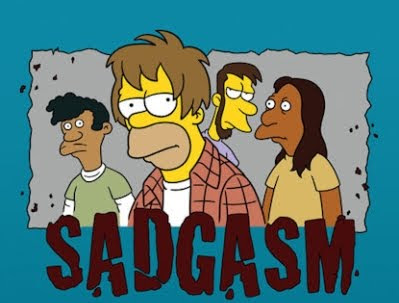 
For a show that always pisses the Internet off, last night's The Simpsons really pissed the Internet off. The episode, titled "That 90's Show", showed that Homer and Marge were single and living together in the 1990's.
The episode opens with Lisa performing complex mathematical equations to determine that if Bart is 10 years old and it's 2008, Homer must have gotten Marge pregnant some time around 1997. We learn that Homer paid for Marge to go to college, that she left him for one of her professors, and that Homer was so despondent he invented grunge music and became a self-destructive addict hooked on Sweet Lady I. (Insulin, not heroin. He became diabetic after drinking too many mocha lattes in the 90's.) The Internet is pissed off that the series has retconned (such a dirty word, and not even a real one like 'cromulent') Homer and Marge's history so that they "couldn't" have met during high school in 1974 as was previously established in season two (in 1991 if anyone's counting.)
First, when will some people finally understand that The Simpsons does not subscribe to and cannot be defined by any type of traditional continuity. To demand it of them is foolish and only leads to bitterness and anger. While The Simpsons sometimes maintains a continuity (Maud Flanders died and is still dead, Principal Skinner and Mrs. Krabappel dated for years and broke up), the series is not serialized in that what happened in the past is inviolate. (Dr. Marvin Monroe was dead for several years and suddenly reappeared a while back. "I was very sick," he said. And we move along.)
No matter what, Bart will always be 10 years old. Time passes in the real world - 18 years and counting - but things have to remain the same in Springfield. And yet they have to reflect our times as well, good or bad.
Any Simpsons writer will tell you the series exists in a "flexible reality." Meaning: whatever they want to do to tell a joke is what they'll do. It's not supposed to all hold together in a tidy bow like a traditional television series. It's not designed to. The series' ability to do whatever they want, which they basically invented in its modern form on television so others could follow suit, has always been their strongest trait creatively.
The hard and fast rule for The Simpsons is this: All that matters to them is the joke they're telling, even when the very next joke immediately contradicts it. And they do that on purpose because you cannot maintain the show's status quo while lasting as long as they have and continue to.
How many times have they looked outside of the Simpsons' kitchen window and seen something other than their backyard, for example? How many times have Bart and Lisa gone on summer vacation and returned to Springfield Elementary in the fall right back to Mrs. Krabappel's 4th grade class and Miss Hoover's second grade class? I can't believe people still get up in arms over stuff like that or episodes like "That 90's Show." They're just telling jokes.
The show did not retcon anything in the sense that the previous flashbacks never happened. Homer and Marge did go to high school in the 1970's. All the old flashback episodes hold. (So do all the episodes set in the future, which also contradict each other.) Now they're saying Homer and Marge were single in the 90's. Well, if you do the math, that Bart must always be 10 is the unchangable rule, then it makes sense they were.
Does it contradict what came before? Yes. It's supposed to. To quote Carl in a previous episode: "It's best not to think about it." It's not worth getting bent out of shape over. Reality is whatever they say it is. Does the 90's episode make sense? NO. And the writers don't care because there's no point in making it make sense. All they were really doing was goofing on the 1990's.
If you didn't think the episode was funny, that's cool. I love grunge music, Nirvana, the 90's, and I thought there was some hilarious stuff:
Homer, Lenny, Carl, and Officer Lou as a Color Me Badd-like R&B group. Lenny's hair and facial hair were awesome.
Kirk Van Houten downloading a picture that will take six hours (as long as no one picks up the phone.)
Kurt Loder "reporting from the 90's."
Weird Al's parody of Homer's parody of Nirvana's "Rape Me."
Homer: "He who is tired of Weird Al is tired of life."
Bart's line after the commercial break: "Why did you stop talking for two and a half minutes?"
The image of grunged-out Homer with the syringe in his arm might have been the darkest thing the show has ever done. There was no reason to believe it wasn't heroin until Marge said it was insulin. I was kind of jarred by it, but I cite precedence from Homer's line in the golden years episode when Homer was in the B-Sharps: "The fame was like a drug. But what was even more like a drug were the drugs."
Now, I didn't love the episode. I liked a lot of the jokes and things like Homer's parody of Bush's "Glycerine" worked for me, but the whole thing overall wasn't one of their best outings. Like many episodes of recent years, the timing was off and a lot of the non-90's specific jokes, especially involving Marge's sleazeball professor, fell flat. But I laughed enough. In the end, laughter is what I want from The Simpsons. And I got it. I don't worry about the rest.
Finally, I would kill for a Sadgasm shirt. If The Simpsons aired on NBC, it would have been available on nbc.com this morning.
Posted by Back of the Head at 4:53 PM