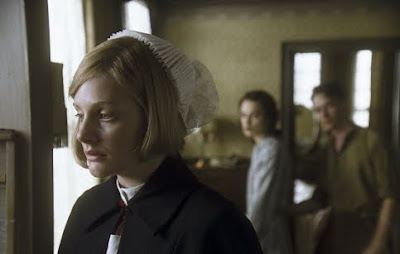 Atonement stunningly brings to life England in between the World Wars, and both England and France during World War II. Director Joe Wright palpably recreates a bygone era only some of our grandparents have memory of and fuses it with a dreamy, tragic otherworldliness. Above all, Atonement shows the cost of how one terrible lie can ruin the lives of innocent people.

The details throughout the movie are extraordinary, from the strange singlet swimsuits men wore back then to chocolate bars wrapped in silver paper soldiers carried in their kits to the pneumatic red tubes used to send mail. The production design and costumes are fantastic. Wright uses the percussion beats of an old manual typewriter like the sound of a ticking time bomb and weaves between different point of views of critical scenes to show us how reality differs from what one naive, imaginatively vengeful 13 year old girl perceives.

Atonement's first half immerses us in life in an English country manor, showing the classism between the wealthy owners and their servants, complete with lies, hidden raw eroticism and sexual intrigue. The second half takes place during the war, showing the devastation of France at the hands of the Nazis as well as the cost of the Blitz when the Nazis bombed London, with hordes of wounded British soldiers arriving in the hospitals, met by nurses performing triage. (The grittty authenticity of the war scenes additionally bring to mind what a bullshit cartoon Pearl Harbor was.)

Wright also attempts to match the amazing single unbroken take in Children of Men with his own, showing James McAvoy and his companions arriving on the beach in Dunkirk, the camera sweeping along with and past them across the vast expanse of men and machinery in one amazing unbroken shot.

The cast of McAvoy and Keira Knightley are superb, but for all of Knightley's top billing and Oscar hype, I was most impressed by the two actresses who played Briony Tallis: Saorise Ronan, Briony age 13, and Romola Garai, Briony age 18. Both actresses shared the same mannerisms to convincingly portray the same character five years apart. Ronan's combination of a young girl's naivety and vindictiveness is beautifully matched by the older Garai's silent regret and intention to sacrifice herself to make amends.

The finest scenes in the movie for me are when Garai's Briony attempts to comfort a fallen soldier with the worst headwound imaginable, and the scene where Garai confronts Knightley and McAvoy and attempts to atone for the lie she told that ruined their lives. Both are incredibly staged and performed. Then Atonement gut-punches the audience when Vanessa Redgrave shows up as terminally ill Briony in her 70's and finally tells the whole truth once and for all.

As relentlessly tragic as Atonement is, it's better than something like Babel in that the characters are aware of the tragic turn in their lives and spend the entire movie fighting against fate to restore the happiness they know in their hearts they deserve. McAvoy and Knightley are torn apart by the lie her sister told yet never give up on each other or the dream that they can get back the time stolen from them. Garai is just as tragic as she lives with the guilt of what she did and the cowardice in her heart for her entire life.

Haunting, hypnotic, moving, classy, and ultimately, inevitably crushing, Atonement is one of the best movies I've seen this year.
Posted by Back of the Head at 10:54 PM