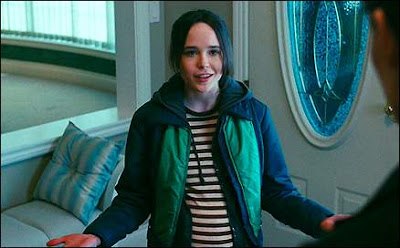 December 26, 2007
Every now and then -- not often -- but sometimes, you meet a character in a movie who just about makes your day. Juno MacGuff is one of those. I wish she were real and I wish I knew her because life would be richer with someone like her around. Ellen Page is probably the best actress under 25 we have in movies today and she makes Juno probably the most memorable lead character in any movie this year. Page is backed by a stellar supporting cast including Michael Cera, JK Simmons, Olivia Thirlby and Allison Janney. How fantastic was it to see Juno's parents be so well written and supportive of her? Parents of teenagers since John Hughes tailblazed the teen movie genre 25 years ago have either been emotionally distant strangers to their kids or willfully ignorant, barking ogres. Juno has a dad who loves her, doesn't understand how she got herself pregnant, isn't crazy about it, but stands by her daughter no matter what. Allison Janney is also really good as her stepmom, who feels the same way her dad does and provides the motherly support Juno needs, even after Juno spits blue slurpies in her urn after they argue.
As great as they all were, Jennifer Garner and Jason Bateman as the prospective adoptive parents to Juno's baby almost stole the show for me. I was most impressed by Jennifer Garner's performance. She played a character who desperately wants to be a mother and nursed some deep pain about her failures both to conceive and adopt. Garner showed here she's a much, much better actress than the material she has chosen in the past allowed her to be. Juno is easily her best cinematic work yet. Bateman turns in a very sly performance where he slowly reveals the glaring hole in his personality that makes him kind of a creep. They walked a fine line in the budding relationship between Juno and Bateman but they cleverly avoided all the usual traps. Both Bateman and Garner's characters would have degenerated into standard villains if Juno were the standard crass, cynical, turd burglar Hollywood spews out. (Which includes superhero turds like X-Men: The Last Stand and Elektra, which criminally wasted the talents of Page and Garner, among many others.)
If I have quibbles with Juno, it's that I thought the first 15 minutes or so went a little overboard on the stylization of the dialogue and the characters. Lines like "Silencio, old man!" and "That's one doodle that can't be undid, home skillet." were more distracting than funny to me. But once Juno revealed her pregnancy to her parents (I liked how her stepmom kept hoping she was expelled from school) the movie took off.  And by the time Juno called the abortion clinic on her hamburger phone, looking to "procure a speedy abortion", I had warmed to the snappy banter by Diablo Cody. The dialogue really is quite good in the movie. What a treat to see a movie about teenage kids that's very funny but doesn't have the main character constantly screaming and swearing, unlike that other blockbuster comedy Michael Cera was in this year. The other thing that didn't sparkle with me was the folksy music on the soundtrack. All of the music conversations Juno and Jason Bateman had about bands like Sonic Youth made me wish they were on the soundtrack of the movie, even if Juno decided "it's just noise."
Juno is one of those movies that are all too rare; filled with smart, honest, emotionally complete characters, whip-smart writing, fine directing from Jason Reitman (Who's 2-0. First Thank You For Smoking and now Juno. What a career this guy is putting together), genuine humor, and love. The movie poster for Juno should have come with the label "made with love". Juno is a movie made by people who care. Who care about quality, about audiences, about their characters, about saying something sweet and genuine about themselves and about us. One of the best movies of 2007.
Posted by Back of the Head at 10:55 PM