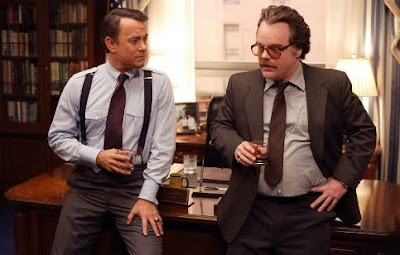 December 21, 2007
According to Charlie Wilson's War, Charles Wilson, a Congressman from Texas "of no particular importance" finagled a billion dollars of US funds for the CIA to finance Afghanistan's war against the Soviet Union in the late 1980's. Because of Wilson's efforts, the Afghanis had the weapons they needed to become the first nation on Earth to defeat the Soviet Army, which lead to the collapse of the Soviet Union and the end of the Cold War. This is all "based on a true story." Whatever may be true about this story is buried somewhere in a slick, talky, entertaining, 87 minute fluff piece with a lot of snappy patter and virtually no conflict or drama. Seriously, there's no conflict in the entire picture.

In Charlie Wilson's War, Charlie Wilson wins. Every time. Every single problem he faces, he immediately overcomes. Whenever he needs something done, he goes out and does it and nothing impedes him. He makes enemies who meet behind closed doors and complain about him, yet none of them do anything to stop him.

Charlie Wilson always gets exactly what he wants at no cost and with no sacrifice. Charlie Wilson needs to get Israel to work with Pakistan despite their mutual hatred? One meeting and it's done. He needs Egypt to work with Israel? One meeting in a nightclub with a belly dancer he brings in from Texas (!), it's done. He needs his boss Ned Beatty to sign off on giving a billion dollars to the CIA? A trip to Pakistan so Ned Beatty can see the refugees and it's done.

Even when Charlie Wilson isn't personally involved, it's done. According to the movie, the Afghanis had no trouble at all using the US-supplied weapons to destroy the Soviet Army. It was easy as pie. Look, Soviet helicopters and tanks! Just point the rocket launcher and BOOM! It's done. Just like Charlie Wilson taught them. Apparently, waging a clandestine war against the USSR and ending the Cold War was surprisingly easy.

The biggest threat to Charlie Wilson in the movie is a federal indictment pending because he spent a night in a fantasy suite in Las Vegas with a Playboy model, two strippers, a sleazy would-be Hollywood TV producer, and some blow. Not that Charlie Wilson did any lines. The pending indictment causes great consternation to his big boobied harem of assistants, including Amy Adams, Rachel Nichols, and Shiri Appleby, but Charlie Wilson isn't worried. Why should he be? Less than 20 minutes of movie time later, the indictment is dropped and Charlie Wilson skates by another problem that didn't actually pose a problem for him.

I did like Charlie Wilson's style, however. He has excellent taste in big boobied assistants, and even Emily Blunt shows up just to prance around in her underpants and show off her suprisingly hot body. But if I learned anything from the movie, it's that Shiri Appleby needs to be in more movies because she's ridiculously hot.

The engaging dialogue complete with walkandtalks and wink-wink jabs at Washington politics by Aaron Sorkin and the performances by Tom Hanks and Phillip Seymour Hoffman carry the picture. Sorkin sets a record for characters in a movie gleefully talking about how much they love "killing Russians". Hanks musters up all the charisma he has and all the credibility he loaned to the US Government in The Simpsons Movie to give us a very, very likable hero.

Although we're told Charlie Wilson is a drunken, promiscuous rascal (the biggest laugh in the movie is when the murderous President of Pakistan tells Wilson flat out he has character flaws), we never see him do anything wrong. He likes beautiful women and enjoys sex with them. Also, he drinks a lot. Those are his character flaws. Otherwise, he's a prince. Phillip Seymour Hoffman's CIA agent even marvels that Wilson's the "only honest politician" in Washington.

Hoffman does his unkempt, smartest and angriest guy in the room schtick and does it really well. Still, Hoffman might want to get 8 hours of sleep once in a while. Hoffman always looks like he's about to keel over from exhaustion in every movie. Hanks and Hoffman make a good team and there's a hilarious exchange where Hoffman bugged a bottle of scotch he gave Hanks as a present.

Julia Roberts, playing a plastic Southern rich lady version of Tess Ocean, is ostensibly the lead actress because she's Julia Roberts, but Amy Adams has a lot more screen time and is far more endearing as Wilson's number one aide. Since Amy Adams is on her way to becoming the new Julia Roberts, it might be time to retire the original.

All the Oscar talk for Charlie Wilson's War seems like overpraise. It's an entertaining crowd-pleaser but there's not a hell of a lot to it. It seems like all the actual dramatic parts of the story are missing, except for the one dramatic part that made it into the movie: Tom Hanks's bare ass. Thanks, Hanks.
Posted by Back of the Head at 10:08 AM