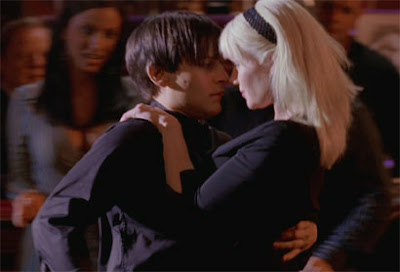 
Spider-Man 3 contains the best superhero action I've ever seen in a motion picture.  Sam Raimi and his effects team have outdone themselves.  When Spider-Man fights the New Goblin or Sandman or Venom, the quality of the comic book-style action is far beyond what's in the previous films and for that matter, any other comic book movie thus far.  The camera swings around with Spider-Man, gets us as close to him as possible, and we feel his movements, his agility, his strength and stamina, and the mortal danger he's constantly in.  And yet the fights are comprehensible, not just a series of close ups and jump cuts.

The CGI used to bring the Sandman to life, extreme close ups of every particle of sand pulling back to reveal the fluidity of movement of a creature composed of and able to manipulate sand, was jaw dropping.  As were the effects used to bring to eerie life the black, oily, alien symbiote that possesses Peter Parker and Eddie Brock.  For living comic book action, Spider-Man 3 is top of the line.  Watching Spider-Man's first fight with the Goblin, gunning web bullets at his pumpkin bombs, and his rescue of Gwen Stacy from a crane gone awry was pure comic book geek joy.

The rest of Spider-Man 3 is bloated, off-putting mess that goes off the rails completely by the third act.  The nice word for Spider-Man 3 is "ambitious." But it's far more accurate to say the movie is "out of control" and "all over the fucking place." One example is in the final fight scene where all we in the audience care about is how Spider-Man and the Goblin are gonna beat Sandman and Venom, while the movie cuts to a completely unnecessary jokey scene with a kid cheating J. Jonah Jameson out of $100 for a camera without film.

A bunch of new characters are introduced who make various degrees of impact, not all of them successful. Bryce Dallas Howard as Gwen Stacy is useless. She has no personality and no function in the story except to be rescued and then become a device Peter uses to make Mary Jane jealous. Her father Captain Stacy has nothing to do besides break some bad news to the Parkers about who killed Uncle Ben.

Sandman and Venom were hardly criminal masterminds, more in vein with the evil-for-evil's sake Green Goblin than with the brilliant and charming scientist corrupted by technology Dr. Octopus was. As amazing as the visual effects were, the Sandman was a disappointment as a character, a monosyllabic brute just out for money for his sick daughter. Eddie Brock being an opportunistic dick and a threat to Peter would have been more effective were Peter not behaving as an even bigger son of a bitch than Brock was. We waited the whole movie to see Venom and when he finally arrived, he was underwhelming. It's disappointing to say the least that the movie took every opportunity possible to show Topher Grace wearing goofy Halloween fangs rather than Venom's fearsome visage. Venom and Daredevil have one thing in common: they don't like loud noises, man. That shit hurts their ears.

Beyond the sheer excess of the movie, the biggest crime is that Spider-Man 3 – "Now with More Singing! More Dancing!" – recklessly squanders just about all of the good will I had for those characters. When Spider-Man 2 ended, I loved Peter Parker. I loved Mary Jane Watson. I loved them finally being together, willing to make their love work despite the mortal dangers always lurking just outside Peter's apartment window. By the end of Spider-Man 3, I couldn't have given a crap for either of them. I'm not even sure how much of a crap they give for each other.

This is a mean-spirited movie at its core, with its loveable, good-hearted characters putting each other through as much hateful, emotional pain as they could cram into 2 hours and 10 minutes. And those 2 hours and 10 minutes felt like 3 hours of Peter embracing his inner asshole and inner Travolta concurrently while a confused and lonely Mary Jane lashes out foolishly at him. Oh good!  The Peter-MJ-Harry love triangle is back.  We sure didn't get enough of that in the first movie.

I was never quite clear whether the movie was implying that Peter was already an asshole before the alien symbiote became his secret flatmate or whether the proximity to the symbiote was what brought his negative aspects out. It sure seemed like he was already a dick before the symbiote made sweet alien love to him and dressed him up in his new black skins.  When Spider-Man received the key to the city (thankfully Macy Gray didn't show up to this party) the way he egged Gwen Stacy on to replicate the famous upside-down kiss with MJ in the rain was more than mean enough. When Evil Peter shows up, complete with the same bangs in the eyes Peter Petrelli has on Heroes, and pulls shit like dirty swing dancing Gwen Stacy right in front of MJ, it becomes hard to fathom how this can be forgivable. Evil Peter was played for laughs, but I found the entire presentation offputting and unpleasant. "I don't want to watch this shit" offputting and unpleasant. Also, just too much dancing.

It turns out to be long-suffering Harry Osborn who is the real hero of Spider-Man 3. The Peter-Harry friendship and rivalry is the best aspect of the movie. Harry's scenes where he was an amnesiac learning how to paint, cook, and enjoy the creepy portrait of his father in his study were goofy fun. The two fights scenes the Goblin had with Spider-Man were the action highlights, with real emotional stakes as these lifelong best friends let loose their resentments and had at it. Harry teaming up with Peter and making the big Han Solo rescue was great and I liked the Goblin's tactics in how to fight an enormous sand monster: launch missiles at it. Missiles never fail. I also liked the weird scene with Harry's butler that started, "I've seen a lot of strange things in this house..."   Hilariously awful. Why didn't he give that exact same speech to Harry at the start of Spider-Man 2?  What was up with Harry's funeral? I saw Peter, Aunt May, MJ, his butler, but who where the black people in attendance? Why were Gwen Stacy and Captain Stacy there?  They didn't even know Harry.

Spider-Man 3's New York is a dangerous place with all of those murderous super villains roaming around but its population seems mostly comprised of hot chicks and supermodels. Every scene not held in a main character's residence was crammed with hot chicks. Hot chicks were everywhere, on the street, in bars and restaurants and even standing around in J. Jonah Jameson's office in the Daily Bugle. I've never seen anything quite like that.

There is so much shit going on in Spider-Man 3 that a lot is left dangling by the end. Venom was destroyed but Dr. Curt Conners still has a sample of it in his lab. Sandman suddenly sees the error of his criminal ways and has an emotional heart to heart with Peter.   You know, if they'd only had that tearful talk a couple of days earlier, it'd have saved everyone a lot of killing and webbing taxis to skyscrapers.  Peter is totally cool with him becoming dust in the wind despite the fact Sandman knows his secret identity.   Sandman also knows Peter is a big crybaby.  Did Sandman ever get the money he stole to his sick daughter? Does anyone care?

Everyone still alive is worse off then they were before. None of the main players are heroic by the end, except Harry, and his reward is a dirt nap. Missing from the final scenes was Mary Jane's line from the trailer: "We've all done terrible things to each other, but we have to learn to forgive each other or everything we ever stood for will mean nothing." Maybe the line wasn't necessary but I think it would have helped. There is a lot to forgive, maybe too much. What's next for Peter and MJ? They going to audition for Dancing With The Stars?

The end of the movie reminded me of a line from The Simpsons:

Homer: "Marge, I'm confused. Is this a happy ending or a sad ending?"