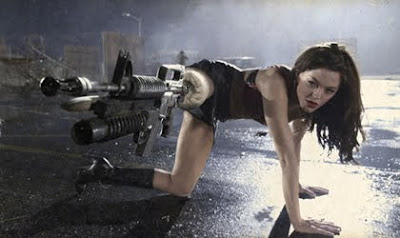 Death Proof, Quentin Tarantino's half of Grindhouse, has an amazing car chase as its finale, with stuntwoman Zoe Bell hanging off the roof of her Dodge Charger as it duels Kurt Russell's "death proof" muscle car through the back roads of Austin at 200 MPH. It's worth the price of admission and the wait of over two and a half hours to see that car chase. Planet Terror, Robert Rodriguez's half of Grindhouse, is balls to the wall with guns, gore, and exploding body parts. If you like that sort of thing, you're happier than a pig in shit.

Of the players, Rose McGowan is the MVP with different roles in both movies. She and Kurt Russell as the mad Stuntman Mike in Death Proof understood the spirit of Grindhouse best and struck just the right notes. I especially liked Russell's turns from charming and funny to sadistic and insane to a screaming and crying pussy at the end. McGowan (both times) and Russell totally got it. They were both fantastic.

Grindhouse delivers what it promises except for one unforgivable thing: No tits! These are supposed to be exploitation movies! Where was the exploitation?! Where was the nudity? There were fleeting shots of tits in the fake trailers but none whatsoever in either movie. What the shit is that?! Tarantino had girls sprawled around wearing next to nothing, one girl was in a cheerleader outfit, but why didn't his camera exploit them? Why didn't the camera find its way upskirt or follow them to the ladies room or linger on cleavages?

It's bullshit no one in the parade of famous movie star Maxim cover girls, McGowan, Rosario Dawson, Fergie, Marley Shelton, Mary Elizabeth Winstead, Vanessa Fertilo, etc. got naked. Why weren't at least the girls who aren't famous exploited? I thought that was supposed to be the point. In this regard, Grindhouse didn't offer us anything more or different than any bad movie Hollywood shits out. How is it Grindhouse offered less titilation than American Pie?

McGowan following in Jessica Alba's Sin City footsteps as yet another stripper (go go dancer, my ass) in a Robert Rodriguez movie who doesn't strip was bad enough. Rodriguez cutting Rose McGowan's sex scene was a total cop out. And so was Tarantino's cutting the lap dance he spent all that time building up to by having Kurt Russell blather on. I call "Bullshit!" on both. "Reel missing"? Fuck you, assholes! I have nothing against the "reel missing" joke but they both used it to screw the audience out of sex in their exploitation movies. Scratch up your footage all you want, but all of the cutesy winking at the audience, all the while denying us one of the main things we showed up to see, pissed me off. The movie stars and writer/directors were all so busy trying to be cool, they forgot that these movies are supposed to be gratuitous bottom feeders. Both Tarantino and Rodriguez have shown more gratuitous nudity in their previous films, but none whatsover in Grindhouse, the ode to exploitation?

I thought Death Proof was the better and more authentic of the two halves of Grindhouse. Death Proof felt a lot more like the kind of movie you'd see in a 70's grindhouse theatre while Planet Terror felt like any other movie today like Doom or Resident Evil, using the scratched up film and missing reels as a gimmick. Once Death Proof hit the pedal to the metal, I enjoyed it a lot. I was bored through most of Planet Terror. Once McGowan finally got her machine gun leg, all the cool moments with her were already given away in the trailer and TV spots. Meanwhile, Tarantino was so in love with the endless dialogue he gave to all of the actresses he hired, he took forever to get to the car chase killings that we paid to see in the first place. Most of the time, both halves of Grindhouse felt like the directors were just jerking off to ---


--- rantino looks like a monster. He's completely distracting. His enormous Frankenstein head does not belong in front of a camera but they both made sure to give us heaping amounts of QT, actor.

I feel like both Tarantino and Rodriguez betrayed their very concept. If someone like Paul Verhoven were invited to do a Grindhouse movie, it seems to me he would not get cutesy and dick around. You'd see more tits than in Showgirls and more violence than when Murphy gets the shit beaten out of him before he became Robocop. A guy like him knows how to exploit. That's the kind of shit I was expecting to see in Grindhouse.

I liked a lot of Death Proof and some of Planet Terror but I thought Grindhouse had different ideas in mind.  Call me when Machete comes out. That flick looked fucking cool. I'll be first in line for that.
Posted by Back of the Head at 4:55 PM