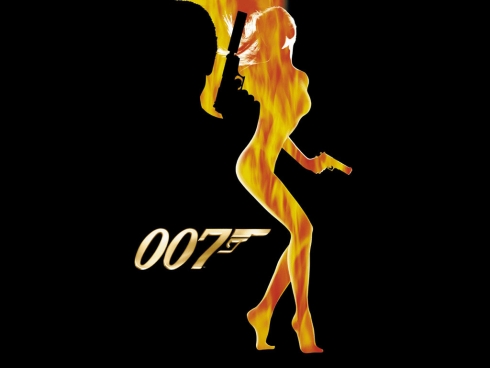 I've had James Bond on the brain for a couple of weeks. I rewatched Goldfinger two weekends ago and then I got motivated to watch other Bond movies. I'm going to rant quite a bit about James Bond. I promise not to make any stupid Bond jokes like "I'll try to leave you shaken, not stirred." (That doesn't count.)

Who is the best James Bond? The most popular answer is Sean Connery. They're not wrong. He's the icon. Most of the younger set will say Pierce Brosnan. Also not wrong. Pierce is the modern embodiment of James Bond; he incorporates all of the best qualities of his predecessors. If a kid today asked me who James Bond is, I'd show him Brosnan. [2008 edit: With Casino Royale's popularity, Daniel Craig has probably transcended Brosnan as the accepted standard for modern Bond at this point.] Connery and Brosnan are both fantastic and I love both of their Bonds. In my experience, however, you love the Bond you grew up with the most and for me, that Bond is Roger Moore.

I've seen every Bond movie at least twice. You (Don't) Only Bond Twice. Moore is still my favorite Bond and he probably always be. The popular strikes people have against Moore's Bond can be easily refuted:

1) Moore doesn't look like James Bond. Again, Roger Moore was the first Bond I ever saw, and to me he's what James Bond is supposed to look like. I discovered Connery in my teens and later adjusted my perception of Bond with the knowledge that Connery was the first, with Timothy Dalton and Brosnan fitting that mold. Connery may have been the first, but Moore is the longest serving Bond (1973-1985) and at seven, he made the most "official" Bond movies (Connery's seventh was the non-canon Never Say Never Again, which Moore's Octopussy trumped at the box office in 1983).

2) Moore is too silly/weak in the role. Wrong. Moore was a ruthless motherfucker when he wanted to be. Moore's Bond cold-bloodedly killed henchmen left and right, man or woman, and he personally executed the main villain in his movies. I think maybe this idea that Moore was a weak Bond came about because he never killed Jaws, his most famous adversary, but the running joke behind Jaws was that he could survive anything. He may have had a twinkle in his eye and he enjoyed a good chuckle, but fuck with Roger Moore's James Bond and you were a dead man or woman. And if you're a woman, Moore's Bond would be sure to nail you first.

3) Moore's movies weren't as good as Connery's. Depends on the movie. Moore did end up in some stinkers. Moonraker is ridiculous because of its third act - James Bond should not be in outer space - though the globetrotting in Califonia, Venice and Rio before outer space is vintage 007. Octopussy, once you get past the title (but how awesome is it that they got away with that title?) is overlong and dull but better than you remember in the first half set in India.

However, The Spy Who Loved Me is an all-time classic. It's a fantastic James Bond movie with all the globe-hopping, sexy girls, gadgets (the Lotus sports car that becomes a submarine, which is more believable to me than Brosnan's invisible car in Die Another Day), memorable henchmen (Jaws), and supervillains with "impregnable" headquarters (an undersea fortress/city) that you want to see when you go to a James Bond movie. I'd put The Spy Who Loved Me right up there with Goldfinger as the best examples of James Bond.

Furthermore, I state for the record that because Moore has The Spy Who Loved Me under his belt, as Connery has Goldfinger, Moore will always have one up on Brosnan. As unfair as it is, Brosnan never achieved the distinction of being in a Bond movie that was as great as he was in the role. The one that comes the closest for him is Goldeneye, which is good but fails to achieve the distinction of being a classic Bond movie to stand alongside Goldfinger or The Spy Who Loved Me. Brosnan himself was still finding his way as Bond in Goldeneye. By the time he had grown comfortable in the tuxedo, his three other Bonds generally descended in quality.

Also, when it comes to the coda of MI6 or British Parliament trying to get in touch with Bond, only to find him in the middle of having sex with whichever girl survived the movie, nobody gleefully embarrassed England quite like Roger Moore's Bond.

One final claim to greatness that Roger Moore's Bond can lord over his peers is that he had the best opening credit music of any Bond (and I'm gonna date myself like a motherfucker now). Besides Goldfinger, which is mostly memorable for how much it's been parodied and homaged over the years (including the theme song of Goldeneye by Tina Turner), how distinctive are Connery's themes? (Example: Hum the theme from Thunderball or From Russia With Love. You can't.) Do you remember either of Timothy Dalton's theme songs? ("License to Kill" by Gladys Knight was actually not bad at all. It was a top ten hit in the summer of 1989.) Brosnan unfortunately has the distinction of having what might be the single worst theme song in Bond history: "Die Another Day" by Madonna. I want to beat my ears with jagged rocks whenever I hear that fucking atrocity.

Roger Moore's Bond has the best theme songs. He has two famous rock themes that now qualify as classic rock and pop songs, "Live and Let Die," by Paul McCartney and Wings and "A View to a Kill" by Duran Duran. If that weren't enough, he has the two best romantic love song themes in Bond history which are indelibly part of the character's mythos: "For Your Eyes Only" by Sheena Easton, which lyrically speaks the most of Bond's inner life, how he affects the women who fall for him and vice versa, and "Nobody Does It Better" by Carly Simon from The Spy Who Loved Me, which is the best musical description of James Bond ever. These songs are considered elevator music today, but in the 1970's and 80's they were smash hits.

While women probably prefer Connery, Brosnan, or Daniel Craig depending on how old they are, Moore was the most romantic of the Bonds, thanks in no small part to the two latter theme songs (although Moore's smooth English charms also had quite a lot to do with it.).

I'd seen all the Bond movies numerous times save one, which I'd never seen. So I Netflixed and watched On Her Majesty's Secret Service, the "lost" Bond, the bastard Bond that most people are unaware even exists and relatively few of my age group or younger have seen. On Her Majesty's Secret Service was George Lazenby's sole outing as 007; he replaced Connery, quit after making it, and was replaced by Connery in Diamonds Are Forever. As such, it's generally assumed Connery's run as Bond was unbroken from 1961-1971 until Roger Moore took over the role. The Lazenby Bond from 1969 tends to be forgotten.

As Bond movies of that era go however, On Her Majesty's Secret Service is actually groundbreaking and important. And it's also a terrific Bond movie; among the top 5 Bonds of all-time. In On Her Majesty's Secret Service, Bond falls in love and for the only time in the entire series, he gets married, to Tracy di Vicenzo, played by Diana Rigg, a countess and the daughter of an Italian crimelord. By marrying into this mafia syndicate, Bond manuevers his way into discovering the location of his arch enemy Blofeld, the head of SPECTRE, and foils Blofeld's latest attempt at world domination, which includes a cadre of super hot female assassins. He didn't expect to fall in love with Tracy, nor she with him. In the opening minutes of For Your Eyes Only, Roger Moore's Bond visits the grave of Tracy Bond. On Her Majesty's Secret Service is the tale of how Tracy Bond ended up in that grave and why Bond never allowed a woman to get that close to him again.

Bond's doomed relationship and marriage to Tracy is the most important of several depatures the movie takes from the established Bond formula perfected by Goldfinger. Bond doesn't meet Q for gadgets, goes rogue and resigns his commission, blunders, behaves foolishly and recklessly, and genuinely falls in love. (He still sleeps with two of the hot female assassins after starting his relationship with Tracy, but he was on the job and hadn't proposed yet.) Several aspects that Casino Royale was praised for as being new or innovative departures from the Bond formula (the emotional depth, Bond's recklessness, his tragic love story with Eva Green) aren't new at all.  They're remakes -- On Her Majesty's Secret Service did it first. What's more, the movie is very much a product stylistically of its release year, 1969. There's a swinging 60's vibe to the editing, music, and style of the movie. It's very much what Austin Powers: International Man of Mystery in 1997 was referencing and homaging.

Lazenby himself turned out to be a far more engaging and effective Bond than expected. He was more open, more human, less cooly invincible than Connery. His love affair with and his losing Tracy was appropriately touching and tragic. But I especially enjoyed the scene where Bond found a Playboy magazine in an office he broke into, took his sweet time going over the centerfold with a big grin on his face, and then decided to take the Playboy with him, still looking over the centerfold as he walked down the hall. Lazenby's fight scenes are manic and energetic, plus Lazenby threw more uppercuts than I could count. He was Captain Uppercut. From certain angles Lazenby also bears an uncanny resemblance to Clive Owen (although I guess that should be the other way around). Anyone still sore that Daniel Craig is now Bond and who wishes Clive Owen got to replace Brosnan need only watch On Her Majesty's Secret Service to get a sense of what Owen would have looked like as James Bond.

When it was over, I enjoyed George Lazenby as Bond so much that I felt it was a shame that he chose not to continue in the role. Then I remembered, had Lazenby not opted for early retirement and remained as Bond, we might not have had Roger Moore at all. I guess everything happens the way it's supposed to.
Posted by Back of the Head at 2:03 PM