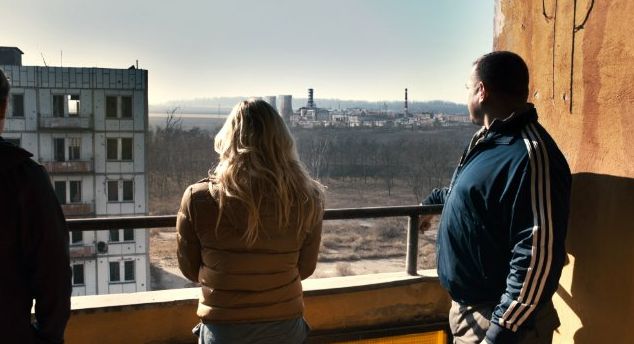 Like the movie title The Neverending Story, I can think of at least one thing wrong with the title Chernobyl Diaries: no one in the movie keeps a diary, about Chernobyl or otherwise. That's like if no one in The Sisterhood of the Traveling Pants wore traveling pants. Chernobyl Diaries, from the producers of the smash phenomenon Paranormal Activity, outdoes Paranormal Activity in setting its stock horror tale in an eerie, haunting real place in the real world. Set in the abandoned ghost city of Pripyat, a stone's throw from the Chernobyl Nuclear Plant, Chernobyl Diaries makes effective use of its location. It's a shame the horror the movie inflicts on its half-dozen thrill seeking youngsters on an "extreme" vacation in Russia doesn't live up to the potential of the location. Two brothers, two girls, and an English couple ignore warnings and good sense in order to explore the ruins of Pripyat under the aegis of their burly Russian tour guide (the most interesting guy in the whole picture). When the wires of their guide's van are cut, they are remarkably slow on the uptake that a bear didn't sabotage their vehicle. Soon they are attacked, in a confusing, illogical manner, first by radioactive dogs, and then by bald, radioactive Russian vampire-types, a whole civilization of which seems to live in the irradiated shell of the Chernobyl plant. Despite vastly outnumbering the tourists, the radioactive Russians still play horror movie games like sending out a little girl (with hair) to distract them so they can kidnap them from the shadows. A cat and mouse chase that leads directly into the still-hazardous nuclear reactor provides some ghastly consequences but it's too little too late. Interest irrevocably depletes once it settles in that the characters are beyond screwed with no chance of survival and no real answers as to why any of this happened are provided. Chernobyl Diaries is bleak and pointless, though a wink to Blinky the three-eyed fish from The Simpsons did provide one genuine LOL.
Posted by Back of the Head at 4:02 PM