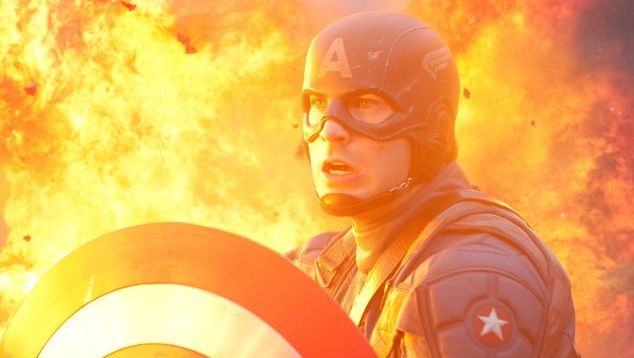 "I'm just a kid from Brooklyn."

Captain America: The First Avenger excitingly re-imagines World War II as fought within the Marvel Comics Universe and accomplishes two neat tricks simultaneously: It opened up the history of the cinematic Marvel Universe, synching up with the details established in Iron Man and Thor while doing so much more seamlessly than the laboriousness that sunk the second act of Iron Man 2. More importantly, Captain America introduced moviegoers to Steve Rogers, the purest, noblest hero in the Marvel Universe.

Chris Evans, who was once the only bright spot in the Fantastic Four films, eschews his usual cocky swagger to seize the spotlight as a true leading man. Sporting a slight era-appropriate Brooklyn accent and at first Benjamin Buttoned with CGI into a scrawny twerp before physically transforming into his jacked, superheroic form, Evans truly makes you believe in Captain America. That the audience comes to believe in Captain America at the same time Steve Rogers starts to believe in himself is part of the fun.

The Marvel-fied version of the 1940s is a joy to behold - a wonderland of era-appropriate costume and production design jumbled with outrageous technology courtesy of Howard Stark (Dominic Cooper), the father of Tony Stark, the future Iron Man. Tony would be aghast to see his father in this age; a smooth-talking playboy with all the best wonderful toys, including hover cars and even the original android Human Torch sealed in an airless chamber on display at his World's Fair. Turns out Tony is chip off Howard Stark's block after all.

Stark's counterpart in technology is Hydra, a secret society within the Third Reich devoted to the scientific, mystical, and world conquering pursuits of their leader the Red Skull (Hugo Weaving). The Red Skull is a warped Nazi attempt at creating a super soldier, and he is in possession of the Tesseract (the Cosmic Cube to comics readers), stolen from Odin's trophy case in Thor. The Red Skull schemes to use the Tesseract's otherworldly power to conquer everyone and everything on Earth. ("And he can do it!", believes his frightened underling Dr. Zola, played by Toby Jones.)

Thrust into all this, unsuspectingly at first, is Steve Rogers, a stereotypical 90 lb weakling who wants nothing more than to fight for his country and make a difference. Rogers' insistence on joining the Army despite five rejections gets him noticed by the kindly Dr. Erskine (Stanley Tucci) as a guinea pig for a top secret Super Soldier project that transforms Rogers into a perfect human specimen. From there, the newly promoted Rogers, dubbed "Captain America", is sent - where else? - to tour across America in musical stage shows clad in a garish costume (his classic comic book threads) to stump for war bonds ("The Star Spangled Man with a plan").

Despite "knocking out Hitler over 200 times" in propaganda films (even The Red Skull tells Cap he's a fan of his films), a rotten tomatoes reception from actual soldiers in the front lines to the Star Spangled Man in tights forces Rogers to re-evaluate what he should really be doing with his abilities. Captain America formally joins the fight and becomes the super soldier he was always meant to be, smashing Hydra's plans with the help of his very own group of Inglorious Basterds, the Howling Commandos (who are without Nick Fury, who is black and the leader of SHIELD in the future).

The first half of Captain America is the most interesting, with the focus squarely on Steve Rogers' character and everyone doubting he has the right stuff to be a (super) soldier, especially Colonel Tommy Lee Jones, who headed the wartime precursor of SHIELD. (My favorite scene in the the movie was Tommy Lee Jones interrogating Toby Jones while eating a steak.) By the time Rogers becomes Captain America, the movie begins dutifully tearing through a checklist of Events That Must Occur: Cap has to get his circular "vibranium" shield, Cap has to watch his best friend Bucky (Sebastian Stan) die, Cap has to end up frozen in ice at the end so he can reawaken in the 21st century just in time to be in The Avengers.

As if realizing 2/3rds of the movie has passed and they've barely scratched the surface of what needs to happen to enable the Marvel Movie Master Plan, Captain America suddenly accelerates, blazing through Cap's wartime adventures in a dizzying montage of action and explosions while setting up all the pieces at breakneck pace so that Cap can be frozen in ice for the coda set in our time that assembles The Avengers. Rogers' sweet romance with the beauteous and bountiful Agent Carter (Hayley Atwell) ends sadly in perfunctory fashion ("I had a date."). It's kind of a shame; more fun Captain America movies could have been set in the terrific Marvel World War II era, but Marvel killed that golden goose for what they hope will be The Avengers' golden egg.
Posted by Back of the Head at 10:29 AM