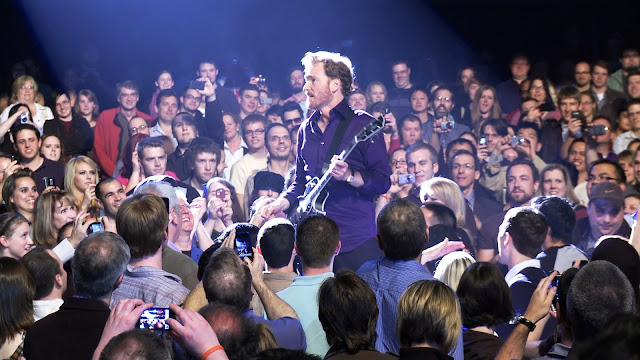 On The Road Again, I Can't Wait To Have My Own Show Again
Conan O'Brien Can't Stop is a fantastic, honest, and gut-bustingly hilarious time machine back to the spring and summer of 2010 - When No Coco Was Allowed On TV. Picking up a few weeks after the debacle with NBC that lead Conan to vacate his dream job hosting The Tonight Show, Conan O'Brien Can't Stop follows the bearded ex-talk show host as he sorts through the festering anger from his treatment by NBC, hits the road to connect with his fans (often to his exhausted chagrin), and fills that void within himself that constantly demands to perform and receive approval from an audience.

"I might be a fucking genius, or I might be the biggest dick who ever lived," Conan assesses himself at one point, and there's ample evidence for both sides of the argument. He is kind of a dick to his loyal staff who stood by him post-Tonight Show and hit the road with him on his "Legally Prohibited From Being Funny on Television" live tour. But Conan is a good-natured sort of a dick, demanding excellence from himself and the people who surround him - mostly by punching them. "Why am I always punching everyone?" Conan asks randomly. Perhaps it's because he's a dick, but also because Conan was still so very angry at the way NBC treated him in the final weeks of his tenure. Gallows humor, biting observations laced with sadness and bits of barely contained fury, comprise the jokes that blaze out of Conan's brain.

Conan Can't Stop takes us from the germ of the idea to create a variety musical road show to the maturation of the sold out show as Conan tours around the country with his staffers and the erstwhile Tonight Show Band (now Jimmy Vivino and the Basic Cable Band). Conan's tour hits big cities like New York, Los Angeles, Seattle and Boston, and even tiny podunk towns like Eugene, Oregon ("Nobody lives here!" Conan fears). I'm glad to say I attended Conan's Boston homecoming show at the Wang Center for the Performing Arts, but a personal blow-away highlight of Conan Can't Stop is from the Seattle show where special guest Eddie Vedder sang The Who's "Baba O'Riley". We meet Conan's many big time showbiz friends, like Jack White, Jon Hamm, and Jack McBrayer from 30 Rock - whom Conan is absolutely, hilariously savage to when mocking him as a hillbilly. We also meet a bunch of people who are well-wishing strangers to Conan. When they gather in his backstage areas before the shows, an exhausted and irritated Conan still compulsively feels the need to perform and entertain them. Conan's pure talent, which is on display in its rawest form in the documentary, is undeniable, both as a comedian and as a surprisingly talented musician with a deep love of bluegrass and rockabilly music.

It's touching to see how devoted Conan's talented writers, staff members, band members, and his ever-ready sidekick Andy Richter are to him. In fact, we learn Conan really has a second sidekick besides Andy; his "long-suffering" assistant Sona Movsesian. Sona dutifully absorbs Conan's constant ribbing and threats to fire her; she is always by his side whether her boss is on top of his game or sprawled like a dead eyed zombie on a couch too-small for his lanky 6'4" frame. A big laugh comes at the Bonnaroo Festival, when Conan on stage holds 40,000 sweaty concert goers in the palm of his hand and Sona assures him, "You were like Hitler up there!" Later, when the drained, ready-for-this-tour-to-end Conan is assured it's almost over, he quips, "That's what they told Anne Frank." While Sona takes Conan's lickings and keeps on ticking, Andy Richter proves once more to be Conan's secret comedy weapon, his personal WMD always blasting the perfect scathing quips and japes at just the perfect moments. ("Oh good! It's miserable again!")

Looking back now at that grueling, joyful, electric summer on the road and knowing that Conan does have his own show again - on TBS, which he hilariously scoffed at when first approached with the idea - it's reassuring that Conan's own words to his fans at the end of his Tonight Show proved true: "If you work really hard and you're kind, good things will happen." Good things do happen to good people. There is such a thing as a happy ending - and a new beginning - for Conan O'Brien. And now he can talk to Megan Fox again, because Conan has his own show again.
Posted by Back of the Head at 9:09 AM