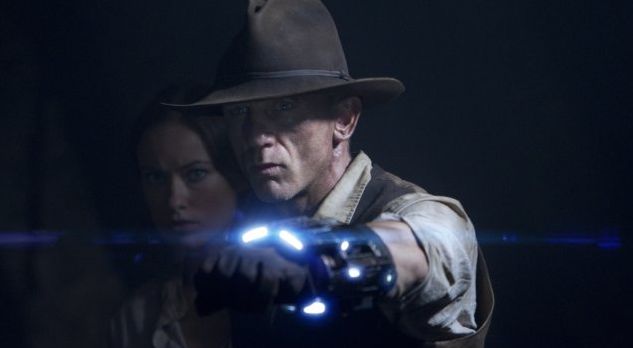 ** SPOILERS **
It is the Old West, the time of cowboys. One cowboy, Daniel Craig, wakes up in the middle of nowhere, with no shoes, no memory of how he got there, and some newfangled sorta doohickey attached to his wrist. No one who meets him is particularly curious about the doohickey, and nor is Craig so much. It's just there. At some point, it'll do something, and when it does, it's not particularly interesting. This sums up Cowboys and Aliens. There's all this stuff in the movie, sit through it and things will happen like explosions and gun fights, and when it does, it's not particularly interesting or worth closer examination. There are certainly aliens, and they're considerably less interesting than the cowboys.

There's a mystery to who Craig is that isn't a mystery because half of the dusty Old West town of Absolution run by ornery cattle baron Harrison Ford knows who Craig is. Ford is an ex-Mexican War colonel who is feared by everyone in the town but it turns out his bark is worse than his bite and he isn't such a bad guy after all. When aliens strafe the cowboys in their insect-like ships and pilfer a bunch of them with their spacey version of the claw game, Craig and Ford giddy up after the aliens. James Bond and Indiana Jones together at last, and in a neat visual cue, Craig dons a white shirt and black vest as a nod to Han Solo.

Providing constant distraction is the quizzical presence of the anachronistically beautiful Olivia Wilde. Wilde flutters in and out of Craig's line of sight prodding him with lines like, "You know who you are!" Wilde seems to exist to provide wide-eyed, lovingly lit reaction shots - until we find out who and what Wilde really is (not a cowboy), at which point all the exposition she's been withholding comes pouring out as a lot of vague nonsense. Wilde does however get reborn naked in a funeral pyre like Daenerys Targaryen in Game of Thrones, but Daenerys had dragons, so advantage Daenerys. (While I'm at it, Khal Drogo dumping molten gold on Viserys Targaryen's head > James Bond dumping molten gold on random alien's head.)

Craig has to remember how the aliens captured him and his favorite prostitute Abigail Spencer in the first place (I liked how the cowboys pronounce "whore" as "hooer".) Ford is out to rescue his arrogant whelp of a son, Paul Dano. The running joke of Craig beating up Dano is the only source of humor in the picture. Ford comes to realize he cares for his son's brave and loyal Native American companion Adam Beach more than his real son, and he's the only one who seems to learn a lesson. I'm not sure what Craig got out of his tussles with alien invaders in the end. He didn't even get to keep his wrist thingy. No, Wilde took that when she set out to destroy the aliens' ship - killing herself and taking the aliens with her was her master plan all along!

The aliens are unsightly CGI grotesques, their designs apparently borrowed from the JJ Abrams house of monster ideas. And get this - the aliens are on Earth because they want gold! Gold! Thar's gold up in thar hills, says the aliens! It's a shame the aliens didn't do a giddy prospector dance when they found gold. When Wilde blows up their ship, a bunch of aliens were on the ground massacring the cowboys, but they are seemingly forgotten about when the cowboys claim victory.