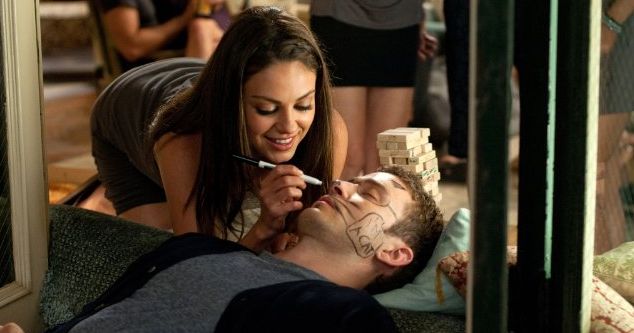 
Justin Timberlake is an attractive, twentysomething, "emotionally unavailable" new media art director in Los Angeles. Mila Kunis is an attractive, twentysomething, "emotionally damaged with more issues than Magnum P.I. can solve" "headhunter" in New York City. At the beginning of the frank, sexy, and terrific Friends With Benefits, Timberlake and Kunis are simultaneously dumped harshly by their respective significant others (Emma Stone and Andy Samberg). Kunis recruits Timberlake to relocate to NYC as the new art director for GQ, prominently product-placed. They form a fast friendship based on easy comfort and their mutual proclivity for snappy repartee.
Timberlake and Kunis are obviously attracted to one another, no matter how much they claim they aren't. But they both wish to avoid messy emotional entanglements (he much more than she, really), so they strike a deal: to be sexual partners only and friends always, no more than that. "I wish they'd make a movie about what happens after 'happily ever after'," Kunis muses while watching her favorite rom com. "They did. It's called porn," Timberlake replies. And thus, they get all porn-y with each other, starting with the happily ever after as if beginning a meal with dessert. Though the inevitable outcome of this questionable sex-only arrangement is never in doubt, in Friends With Benefits, the joy is in the journey.

Enlivening a savvy, relevant script as rat-a-tat as Kunis' laughter, Timberlake and Kunis sell all of their witty banter, even the cliches, with confident gusto. They can't even pipe down long enough to have sex without continuing their jibber-jabber throughout. ("You two bicker like an old married couple," Jenna Elfman, Timberlake's older sister, wryly observes when the NY-based movie takes a sun-kissed vacation in LA.) It's refreshing to hear young people in a romantic comedy parry with real wit and cleverness as opposed to pandering to non-existent laugh tracks with smug sitcom one-liners.

Friends With Benefits is a movie that extols the coolness of pint-sized 1990's rapping munchkins Kriss Kross and mines the Semisonic (not Third Eye Blind, Timberlake finally learns in an amusing runner) one hit wonder "Closing Time" for profound emotional significance. Timberlake is apparently paid in the high seven figures to be art director for GQ, and the magazine is so flush with cash, it provides Timberlake with a furnished, multi-million-dollar apartment. (GQ's gay sports editor, Woody Harrelson, commutes from New Jersey via the same antique speedboat Sean Connery used to escape from SPECTRE in From Russia With Love.)

Timberlake also seems to be "headhunter" Kunis' only client, yet she dwells in a huge SoHo loft. Kunis' mother, a welcome Patricia Clarkson, playfully taunts Kunis with the identity and ethnicity of her absent father and disappears on international trips despite having no visible means of income. Timberlake meets Kunis when she jumps on the baggage claim conveyor belt, managing to not get detained by airport security. Whether Timberlake and Kunis are in New York having private conversations on the roof of 30 Rock or in LA having private conversations on the Hollywood sign, realism is in short supply. Yet somehow it all works, the movie powered by the mega-watt charisma of Kunis and Timberlake.

Even when falling victim to obvious third act plot machinations (break them apart to put them back together for the romantic finish) and the pat explanation of Timberlake's reticence towards relationships he learned via the life mistakes confessed by his father Richard Jenkins, who suffers from Alzheimer's, Friends With Benefits still manages to earn their sweetly sappy, flash-mob happy ending. Justin Timberlake was a key player in The Social Network, the 21st century incarnation of Citizen Kane. Smart and wise, new school but old-fashioned at heart, Friends With Benefits may well prove to be the When Harry Met Sally for this generation.
Posted by Back of the Head at 11:42 AM