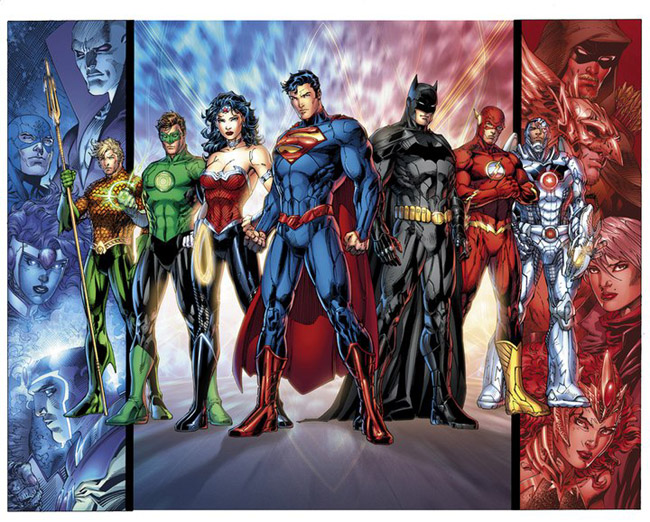 ** SPOILERS **
The launching pad for DC Comics' New 52 initiative, Geoff Johns' and Jim Lee's Justice League #1 sets the stage for the formation of the greatest superhero team in comic books (nope, it's them, Avengers and X-Men, not you), and does so in classic Justice League team up fashion, where two (in this case future) Leaguers would band together to tackle one segment of a larger, formidable threat. Justice League #1 is set five years ago, in a DC Universe that has hardly heard of "superheroes".
Hunted as a vigilante by the Gotham Police Department, the mysterious Batman is hot on the trail of some kind of creature garbed in rags who tried to plant explosive devices all around Gotham. (It's not Bane like in Batman and Robin, uttering "Bane! Bane! Bomb! Bomb!") Green Lantern saves an irritated Batman from this marauder; Green Lantern was drawn to Gotham City by his Power Ring, which he describes as "a GPS for the extra-terrestrial".
It's a little disheartening that Batman is the World's Greatest Detective but, I, the reader, figured out way before he did that the enemy they're after is a Parademon from Apokolips. (Because the entire scenario echoed a gripping segment from Jim Starlin and Mike Mignola's Cosmic Odyssey where Batman battles an Apokoliptian Hunger Dog in Gotham's sewers.) The Parademon, which Green Lantern's Power Ring shockingly can't identify, detonates an explosive device in Gotham's sewers, but quick force field ring-slingling by Green Lantern saves his and Batman's lives.
Because their common enemy is extra-terrestrial, some shoddy logic by both Batman and Green Lantern lead them to believe it must somehow be connected to Superman, who is also an extra-terrestrial. Because, you know, all aliens from space must know each other.  Neither Green Lantern nor Batman have ever met Superman, but Batman has been studying "his power levels". I... see. (No doubt Batman was doing so with a stupid satellite called Brother Eye. Wait, no, that better not be the case.) So off the two heroes go, in search of the Man of Steel.
Meanwhile, we are introduced to high school football hero Vic Stone, whom every college in the country wants to recruit. But all the best football stars have daddy issues, and Vic's father continues to miss his son's games. We learn through a one-sided phone call that Dr. Silas Stone has been studying the new superheroes emerging in the world; hence he has little time for Friday Night Lights.
Back to the superheroes, Green Lantern and Batman fly to Metropolis to search for Superman, and they quickly find him. They find him clad in "ceremonial Kryptonian armor", his eyes glowing slightly less red but still glowing red since DC Comics' seems to believe flaming crimson eyes is one of the defining points of Superman. Superman knocks out Green Lantern in a red and blue blur and announces himself to Batman: "I don't handle easy." (That's what she said. No, not Lois, not in the New 52.)

Famous last words of Justice League #1 are from Superman, red eyes glowing (of course) and sporting a slight smirk, looking over the Dark Knight for the first time and asking, "So... what can you do?"  See, everyone with super powers thinks they're sooo cool and Batman isn't because he's just "a guy in a bat costume."
And that's it.  Not a complete story by any means, just a $3.99 set up chapter introducing four of the Justice Leaguers and opening up the new DC Universe, dropping several hints about the new world order in the DCU. But if you wanted to see the whole Justice League in action like the cover advertises, you're S.O.L.
The overwhelming theme of the first issue of Johns and Lee's new Justice League seems to be "making Batman uncomfortable". Green Lantern's bright, glowing presence yanks Batman out of his comfort zone in the shadows of Gotham, and he doesn't like it one bit. Nor should he. Batman especially didn't enjoy flying to Metropolis in a luminous emerald fighter jet constructed by Green Lantern's light.

Batman and Green Lantern bicker constantly throughout, and the characterization of Hal Jordan as young, arrogant, and cocksure is sound. This is the Hal Jordan I know - not the self-loathing coward we saw in the Green Lantern movie. Jordan's first words to Batman - "You're real?" - confirm that up until this point "the Batman" has been an urban myth.
The best moment of the entire book was Batman yoinking the Power Ring right off Green Lantern's finger as Hal Jordan prattled on. "It's powered by concentration. You weren't concentrating."
So, what do we now know about the new DC Universe? Five years ago, the world had not warmed up to superheroes yet. Batman has been around the longest, hidden from public view but hunted by the authorities. Superman has already gone public, and is the subject of study by Batman, but Batman had not heard of the Green Lantern Corps. Interestingly, the Green Lantern Power Ring couldn't identify Apokoliptian technology. We know from a shot of a sign in one panel Lexcorp still exists. Plus Silas Stone has been studying superheroes, which is a compelling bit of integration, cause and effect, because we all know Vic Stone will be Cyborg.
And the main villain is Darkseid. "Dark Side? What is that, a band?"
So far, so good.
Posted by Back of the Head at 10:20 AM