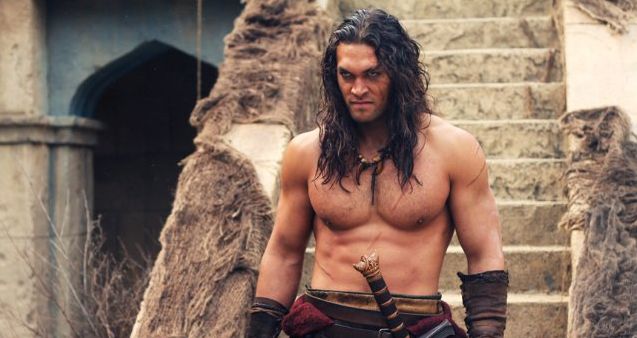 ** SPOILERS **
Sweet Barbarian Love
The new Conan the Barbarian re-imagines us back into a hazy prehistory of swords and sorcery taking place "after Atlantis fell" and before... everything else. On the continent of Hyboria, a child was literally "born in battle" to a tribe of Cimmerian barbarians, the battle conveniently happening around his birth and subsequent heartbreaking death of his barbarian mother. This child would become Conan (pronounced "Cone-IN" like O'Brien and not "Cone-NAN"), whom we observe as a feral youth more adept at killing groups of gruesome man-monsters than most of the adult barbarians in his tribe. Though not prone to outward displays, Conan's father Corin the Barbarian (Ron Perlman) is particularly proud of his hellboy of a son.
In a Lord of the Rings-esque prologue, we are informed by narrator Morgan Freeman(!) that in a pre-prehistory there exists an ancient mask of evil that was broken into shards and hidden by the different barbarian tribes, so that no one person would be able to wield its evil power. Wouldn't you know it, one person, the evil Khalar Zym (Stephen Lang) has almost all of the pieces now and is missing just the one shard hidden by the Cimmerians. Zym and his freaky deaky sorceress daughter Marique (Rose McGowan, costumed with the finger knives of Freddy Krueger and the forehead of Christina Ricci) slaughter the Cimmarians and take the last shard of the death mask, giving Corin the Barbarian a Golden Crown for his troubles (Conan is the second movie this summer to reference Game of Thrones in this manner).
Young Conan escapes and spends the next 20 years maturing into the ripped, chiseled and jacked form of Jason Momoa, who portrayed Khal Drogo in Game of Thrones. Like Drogo's wife Daenerys Targaryen, Conan spends his barbarian days roaming around Hyboria freeing slaves. In particular, Conan prefers freeing harems of sexy, topless female slaves, massacring their slavers, and then throwing sexy orgies for his band of barbarians (don't call them Team Coco). Conan is a popular guy, and has earned the loyalty of his sidekick Ukafa (Bob Sapp, playing Djimon Hounsou from Gladiator). What Conan really, really wants, though, is to kill Khalar Zym and avenge his father. All the best barbarians have daddy issues. However, one can't blame Conan for how easily distracted he was from his Life's Mission of Vengeance by all the sexy slave girls. For 20 years.
While Conan was out in the world making his bones and boning slave girls, Khalar Zym was having a particularly frustrating 20 years. Even though he has the death mask, he needs the pure blood of some race of sorcerers to make the mask do what he wants it to do: resurrect his dead sorceress wife. Even though his daughter is the spitting image of his wife, has the same magic powers, and seems down to do it with her daddy, Zym rebuffs her. No, it's the dead wife he wants. The pure blood he needs belongs to Tamara (Rachel Nichols), the screaming-est sexy priestess in all the land. Seriously, Tamara screams longer and louder than Kim Basinger did in Batman. Finally, after 20 fucking years, Khalar Zym locates Tamara in the only monastery in Hyboria, but she gets away with the help of Conan.
Tamara learns hanging with Conan means being tied up often and listening to his terse barbarian orders like, "Sit!" and "Be quiet!". When she changes costumes, Conan assures her, "You look like a harlot." This is all barbarian foreplay, you see. They escape Hyboria via Ukafa's yacht but Khalar Zym's men still find and attack them. (Conan memorably kills an evil female archer by chucking a spear right through her babymaker). Yet, even this gruesome violence is also merely barbarian foreplay, all leading to Conan bringing Tamara to his secret love shack in the caves of some island. Thus Conan gets to the real meat of things as Tamara experiences sweet, gentle, tender barbarian love.
For a sweaty, fury-ridden, bloodthirsty killing machine, Conan the Barbarian is surprisingly well-versed in the tender arts of love. Conan is no Khal Drogo, who only knew how to rape from behind and had to be coached by Daenerys into learning simple sex positions like missionary and cowgirl - oh no, Conan knows all of that and more! Who would have ever guessed Conan the Barbarian would be such a kind, considerate lover? His secret love nest has a bed that all but vibrates coin-operated, complete with luxurious pillows, sheets that no doubt are made of two thousand thread count, and the whole shebang is candle-lit to best accentuate Conan's gleaming buttocks, as if forged from fire and ice like the steel of his father's broadsword. Oh, and Nichols looks good naked too, in the split seconds of afterthought the camera focuses on her.
After the tender, sweeping acts of barbarian love, the last half hour of Conan the Barbarian is a requisite blur of senseless, frenzied action. The morning after, Tamara is kidnapped by Khalar Zym, Conan gives chase to the aptly-named Skull Cave, Conan fights off a multi-tentacled kraken of some sort, Conan kills the evil father and daughter combo, destroys the death mask, saves Tamara, and barbarian justice is restored to Hyboria.  The movie as a whole is bursting with blood and viscera on the screen, yet is bloodless at heart.
In the original 1982 Conan The Barbarian, when Arnold Schwarzenegger's Conan is asked, "What is best in life?", he replied, "To crush your enemies, see them driven before you, and hear the lamentations of their women." Jason Momoa's Conan would agree with the first two, but when it comes to this new Conan, lamentations is not what he's hearing from the women. Conan the Barbarian 2011 delivers all the loud, ultra-violent, CGI and 3D-enhanced, nonsensical wholesale slaughter expected, but Momoa makes bloody sure to spread that sweet, sweet barbarian love.
Posted by Back of the Head at 11:45 AM