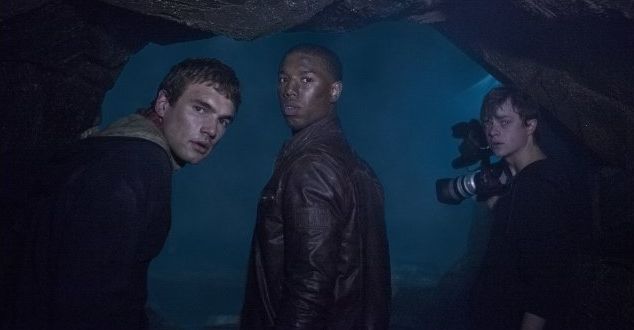 ** SPOILERS **
In Chronicle, three teenage boys are gifted by a radioactive orb of some sort with the power of telekinesis and learn with great power comes great capacity for death and destruction. A "found footage" movie in the style of Cloverfield, Chronicle's stripped down, low budget, HD camera documentary approach belies its most remarkable power: jolting audiences with a realistic and thrilling depiction of what superpowered teens of today would actually be like flying through the air and heaving massive objects like cars and helicopters at each other with wanton abandon. You will believe the boys in Chronicle can fly! (And you'll wish you could too.)

Meanwhile, Chronicle ably tells the stories of the three high schoolers, charismatic Big Man on Campus Steve (Michael B. Jordan), square-jawed and thoughtful good guy Matt (Alex Russell), and troubled powderkeg Andrew (Dane DeHaan), with a shaky-cam verisimilitude* that invokes Friday Night Lights (which Jordan starred in during its final two seasons). Matt's last name is Garrety, perhaps an ode to Minka Kelly's FNL heartbreaker Lyla? Indeed, much tragedy could have been averted if only Coach Taylor could have been there to guide these kids and instill the virtues of "clear eyes, full hearts, can't lose."
After discovering the orb and gaining the ability to move objects with their minds, the three boys bond while exploring the parameters and dangers of their new abilities. The fun of being able to play pranks on the unsuspecting around town soon gives way to terror when Andrew callously causes a car accident that nearly kills a man. Matt insists on the three adhering to rules to keep people from getting hurt. Steve attempts to get Andrew, who is continually bullied by the knuckleheads at school and abused by his cartoonishly alcoholic father at home, to open up and share in his popularity, maybe even get him laid. As Andrew's power develops and his situation at home worsens, his psyche - already prone to sociopathic tendencies - starts to unravel. To Matt's increasing horror, Andrew twistedly begins to fancy himself an "apex predator" among humans.
Chronicle takes surprising twists in its storytelling - one daring stunner in particular - while pushing for realistic, logical conclusions to the boys' actions as it dabbles with the established tropes of superhero origin stories. Chronicle borrows its themes heavily from X-Men and Spider-Man with a touch of M. Night Shyamalan's Unbreakable. Its ultraviolent climactic battle, with the kids causing millions of dollars of damage as they smash each other through downtown Seattle, recalls the seminal conflagration between Superman and General Zod, Ursa and Non in Superman II. When the boys discover their telekinesis allows them to fly, the aerial acrobatics are thrilling and amazing, taking the immediacy and perspectives seen in Hancock's flying scenes to even greater heights. The "you are there with them" POVs of the flying scenes are breathtaking. The superpowered action feels far more visceral and authentic than recent superhero tentpoles like Green Lantern or Captain America.
Chronicle's Kryptonite comes in the trappings of its found footage documentary style - the movie labors to justify how and why Andrew and other characters film every moment, well past the point of it making sense how and why a camera happens to be operating at certain inopportune times. ("I'm just filming things now," is often the throwaway explanation.) The conceit unravels when one wonders who edited this "found footage" into a movie anyway? Upon closer inspection, Chronicle also isn't really about anything; there is no greater theme to the tale, no life lessons to be learned, and no secrets revealed regarding where that orb that granted the boys their powers came from - just the terrible tragedy of too much power in the hands of young people who aren't emotionally equipped to handle it. Chronicle also cheats in the final conflict between Matt and Andrew where they hurl each other through buildings repeatedly, the impact of which should have killed them.
And yet, like the wink-wink pseudo-magic show Steve and Andrew put on in their school talent show to applause and acclaim, Chronicle is filled to the brim with jaw-dropping "how'd they do that?" moments. Chronicle boasts some of the coolest, most convincing superhero action ever seen in the movies, made for a tiny fraction of what Hollywood spends on its summer blockbuster spectacles. It is a rare movie beast that builds and builds throughout and then actually over delivers in spectacular fashion in its third act. An immersive and impressive superhero achievement by director Josh Trank and writer Max Landis, Chronicle is a marvel.

* A word to the wise: The shaky cam can cause motion sickness. Don't sit too close to the screen. I found this out the hard way.
Posted by Back of the Head at 10:00 AM