X-Men: Days of Future Past

X-MEN: DAYS OF FUTURE PAST 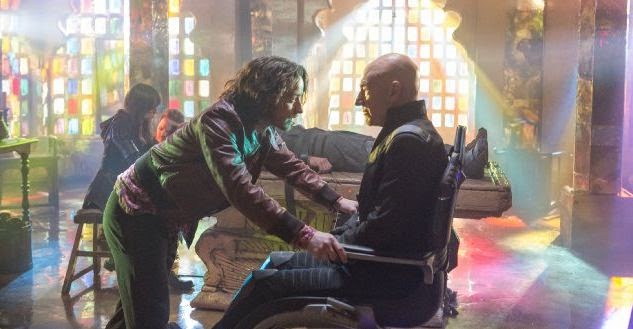 The future is not set. There is no fate but what we erase for ourselves. This, paraphrased, is the theme of X-Men: Days of Future Past, director Bryan Singer's triumphant return to the helm of X-Men after a decade. The phrasing, among other things, is borrowed from James Cameron's Terminator and Terminator 2, which Days of Future Past invokes in its opening scenes of a horrifying future (circa 2023, more or less, from the math we are given) where the mutant race has lost a war against humanity and their final solution robot weapons, the Sentinels. With "the worst of humanity" now in charge (details are sketchy), the future of Days of is an post-apocalyptic nightmare-scape of eternal night, huddled survivors trudging along like in a Macintosh commercial from 1984, the bones of the dead crunching under their boots, and omnipotent, shape shifting robots dropping from Borg cubes in the forbidding skies to massacre what's left of the ragtag mutant race. Is this really "winning" a war for humanity? Well, whatever wipes out those dirty, stinkin' mutants, one supposes. Taking place simultaneously in the future and in the past, but never actually in the present, fixing past mistakes is the order of the day in Days of Future Past, for the X-Men and for the filmmakers in charge of the X-Men movie franchise.

Borrowing its title and basic concept from the celebrated Marvel story by Chris Claremont and John Byrne, Days of Future Past is a gleefully comic booky X-travaganza. Things have gotten so desperate for the surviving X-Men in the dark future, including Professor Charles Xavier (Sir Patrick Stewart), Magneto (Sir Ian McKellan), Iceman (Shawn Ashmore), and Kitty Pryde (Ellen Page), that their only recourse is a desperate gamble: send the mind of Wolverine (Hugh Jackman) back through time fifty years to inhabit his pre-Adamantium, bone-clawed 1973 body (via superpowers we didn't know Kitty Pryde, who walks through walls, has. She must have evolved in the future.) For you see, as we learn through Xavier's wheezy X-position - which is the only way any X-Man in the dark future speaks if they have any lines at all - in 1973, the Sentinels program is developed by scientist Bollivar Trask (Peter Dinklage) to combat the growing mutant menace. Trask is murdered by Mystique (Jennifer Lawrence), who is captured by the government and experimented on. Thereby the secret of her shape shifting DNA is stolen and given to the Sentinels, who also evolved from clunky giant robots into adaptable killer mecha morphs able to combat any mutant's powers.

All Wolverine must do - and it's a mission all agree he's ill-suited for except that his mutant healing factor allows him as the only X-Man whose psyche can survive the rigors of time travel - is reunite the estranged young Charles Xavier (James McAvoy) with young Magneto (Michael Fassbender) to stop their equally estranged old friend from X-Men: First Class, Mystique, from carrying out her first murder and setting off the terrible and confusing chain of events that follow. Note that in the comics, it's Kitty Pryde herself who did the time traveling and future-saving, but c'mon, that's never gonna happen in an X-Men movie. Instead, poor Kitty is relegated to spend the movie perched above a prone Wolverine's head, her hands shooting time traveling energy into his temples, and whimpering from her mortal injuries whenever Wolverine has convulsions and slashes her with his Adamantium claws. No Kitty, we all know who the real star of the X-Men movie franchise is and if you doubt it, just have a gander at Hugh Jackman's buff, X-ploited bare ass when he awakens in 1973.

Days of Future Past vividly recreates the early 1970s, post-Vietnam and taking place during the signing of the Paris Peace Accords, and has great fun portraying the look and hairstyles of that ghastly decade. Not unlike how Bruce Wayne turned out at the beginning of The Dark Knight Rises, we learn that in 1973, Charles Xavier has become a scruffy, Jesus-bearded recluse, holed up in his abandoned Wayne manor hating the world because Rachel Dawes died his lifelong (strictly platonic) best friend Mystique abandoned him and ran off with Magneto (who it's strongly implied she got magnetic with, if you follow). Xavier, a drug addict who can now walk via a magic formula that also suppresses his vaunted telepathy, is tended to by Alfred J. Pennyworth the Beast (Nicholas Hoult), who refrains from giving him lectures about getting back into the world. (That's Wolverine's job.) As for Magneto, he is once again (although technically this is the first time) in a plastic prison, buried deep beneath the Pentagon after he was captured as the assassin of President John F. Kennedy. (Magneto protests his innocence, and the solution to the "curving" magic bullet theory and the X-planation as to why Magneto claims he instead tried to save JFK is the best gag in the entire X franchise.) If Xavier, Magneto, and Mystique can just overcome their respective bitterness and abandonment issues towards each other, they might just be able to save their own race.

We quickly realize that despite all this time tossed mumbo-jumbo, little has changed and it's business as usual around here: the fate of the world and all mutantkind rests in the hands of Xavier, Magneto, and Wolverine, the three oldest white males of the X-Men franchise. The X-Men and mutants in general are the most diverse cast of characters in comics, multi-ethnic and multi-national, but once more, in the movies, it's the old white dudes (granted, as their studly younger selves) who must save the world (from the mess they made.) But there's also Mystique, who is born blue, but mostly passes amongst the rabble as Caucasian knockout Jennifer Lawrence. In the dark future, many of the surviving X-Men are of minority descent: there's the Asian girl with the pink hair who creates worm holes (Blink), there's the big black guy (Bishop), there's the Native American guy (Warpath), etc. There they are, barely introduced so we hardly even learn their code names, marched on screen to fight Sentinels and be slaughtered gruesomely. They're not characters, they're cannon fodder. Even Academy Award winner Halle Berry as Storm suffers the indignity of having maybe two lines of dialogue before she gets massacred by Sentinels. When it comes time to free Magneto from the heavily fortified Pentagon in 1973, luckily Wolverine knows a (white) guy, the super speedster Quicksilver (Evan Peters), who entertainingly steals the movie in Days of Future Past's most amusing and best set piece.

The most pivotal bromance in all of superhero comics - Xavier and Magneto - plays like that old fable "The Scorpion and the Frog." Despite how much Xavier wants to trust Magneto, Magneto always reverts back to his true nature, betraying his friend Charles because he hates and fears humanity and must assert the dominance of mutants "by any means necessary" (usually by forming a Brotherhood). This does lend us awesome spectacles, such as Magneto using his powers to lift a baseball stadium from its foundations and dropping it to surround the White House so he can terrorize the actor providing the worst impression of President Richard Nixon in a many a movie. Redeeming Magneto is a job for the future; the wizened McKellan's version of the Master of Magnetism ultimately finds that  heroic backbone when making the ultimate sacrifice to protect his friends from the Sentinels. But in the past, the crux of Days of Future Past is truly about redeeming Mystique and Charles Xavier learning to find hope again (echoing his first appearance in the first X-Men when he tells Magneto he is "looking for hope.") The true emotional stakes of Days of Future Past rest in the hands and charms of the First Class of McAvoy, Fassbender, and Lawrence, plus Jackman, all of whom are heroically up to the challenge.

Indeed, despite its Days of Future gloom and doom, Days of Future Past is a hopeful movie about fixing past mistakes, in which Singer and his creative brain trust directly address the damage done to the X-Men franchise by substandard sequels and sorry spin offs while he was off trying to make audiences again believe a man can fly. By redeeming Mystique and stopping the Sentinels' creation in the past, Days of Future Past's reward for the X-Men and the audience is a new future where everyone is alive and well. The X-Men are all united in a warm, fuzzy, golden-hued new reality where the franchise's main players are happily X-isting at the Xavier School, including Storm, Rogue (Anna Paquin), Cyclops (James Marsden) and Jean Grey (Famke Janssen)! Dropping the visual clue to what he's up to by showing a clip of Star Trek early on, Days of Future Past pulls a Star Trek reboot of its very own, except instead of setting up a new alternate timeline of the young, Singer reset the X-Men timeline to keep his aging original cast intact yet wipe clean their past adventures and tragedies. It's a clever franchise rejiggering, effectively making the maligned X-Men: The Last Stand by Brett Ratner null and void (but also seemingly eliminating his own stellar entries, including X2: X-Men United, still the best film of the franchise). So none of it ever happened? Or did only some of it happen? Only old Charles Xavier knows, and there might have to be an Apocalypse before he tells.


The secret weapon of #DOFP is the X-cellent score by John Ottman. Probably the best score of any Marvel based movie.
— John Orquiola (@BackoftheHead) May 25, 2014