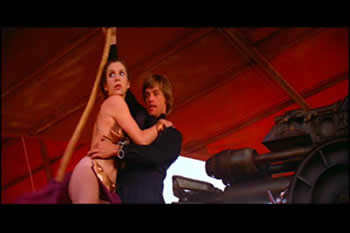 
Sucks to be those two kids. From the moment they were born, their destiny was to kill their father. That's shitty. They were their only family but were separated at birth, raised on separate planets and never knew each other growing up. When they met by confluence of events, since they didn’t know they were related, Luke was hot for his sister. She even made out with him once to make Han Solo jealous. (The only people possibly not skeeved out by that would be George Michael and Maeby on Arrested Development.)
Luke said in Return of the Jedi that he never met his mother, except for the few seconds she saw him and named him "Luke" before she died from her broken heart (possibly also from complications from childbirth or even Medi-droid incompetence.)  It's true that baby Luke never got to suck on Natalie Portman’s supple little breasts. Aunt Beru probably didn’t offer herself up as a substitute.

The decision making process behind how the kids were assigned their foster parents hardly seems fair. Leia was given to Senator Bail Organa of Alderaan and is raised as Leia Organa, a princess. Luke was given to Uncle Owen and Aunt Beru on Tattooine and raised as a dirt poor moisture farmer. Pretty good deal for Leia, shitty for Luke. At least he wasn’t given to Watto to be raised as a slave like his father was.

There was some logic to why Luke was sent to Tattooine. If he was going to be the one chosen to grow up and kill Vader, then hiding him on Tattooine was a smart move. Anakin hated Tattooine and Vader would never set foot on his homeworld ever again.

But what was the wisdom behind raising Luke as “Luke Skywalker?” The kid was constantly trying to get a piloting license and become a starpilot. Wasn’t anyone remotely worried the name “Skywalker” registering across Imperial channels would raise a red flag and alert that other Skywalker in the black helmet that there was a kid out there using his name?

Something else that makes little sense: Jedi are supposed to be trained from childhood in the Force. It takes a lifetime to become a Jedi. So why did Obi-Wan wait until Luke was twenty before he started training him? Wasn't one of the problems with Anakin that he was already too old to be trained as a Jedi? And Anakin was only 9. Luke was twice that when he finally got started. Why wasn't Luke just hidden on Dagobah so he could be raised in a swamp by the backwards-talking little Muppet? At least he'd know what he was doing as a Jedi. And Luke speaking with Yoda's syntax would have been fucking great.

Luke to Vader: "Full of surprises, you'll find I am."

And the lies, dear God, the lies! Obi-Wan spent two movies lying right to Luke’s face. “Darth Vader betrayed and murdered your father.” That’s not what happened. A certain point of view? Really? Obi-Wan kept stringing Luke along, giving him little tidbits of false information. Then he up and died on him.

Next Obi-Wan became a Force ghost and kept right on jerking Luke around. My favorite moment of this is at the start of Empire Strikes Back when Luke gets attacked by the Wampa ice monster on Hoth, and is lying in the snow bleeding to death. Obi-Wan chooses this opportune time to haunt him.

Obi-Wan: “Luke.”
Luke: “What?”
Obi-Wan: “You will go to the Dagobah system. There you will meet Yoda, the Jedi Master who instructed me.”
Luke: “Can this wait? I’m fucking dying here.”

But for all the shit Luke goes through, including getting his hand cut off and getting personally electrocuted by the Emperor, at least he gets to learn about the Force and become a Jedi. Leia totally got the shaft there. She was also Force-sensitive but she never even got the consideration of being the one to become a Jedi and kill her father.

It really doesn’t make sense. Leia was the twin who was tough, mature, worldly, and intelligent. Luke was whiny and callow, like his father Darth Vader. So why would you send the boy who’s just like his father to go kill him instead of the girl who's just like her mother Padme, who was Vader's biggest weakness? It stands to reason Luke would be more susceptible than Leia to the very same temptations that turned his father to the Dark Side of the Force. So why just train Luke? Why not train both twins as Jedi? Wouldn't two Jedi coming after Vader be better than one? Is it because Leia’s a girl? Yes.

Mr. Burns: I don't know what 'phallocentric' means, but no girls!

Yoda sat on Dagobah for twenty years watching those two kids from afar through the Force. I imagine he was more than a little disappointed when the whiny brat who’s the spitting image of Anakin Skywalker was the one Obi-Wan sent to him instead of his twin sister, the courageous freedom fighter and Rebel leader.

That’s probably why Yoda was so hard on Luke. They screwed up royally with Anakin; Yoda wasn’t going to coddle Anakin’s dope of a son like Obi-Wan did. Of course, at the first chance he got, Luke bailed on Yoda and went running off to get his hand chopped by Vader. Seems like they were hitching the horses to the wrong wagon.

Leia also got robbed of ever getting the satisfaction of seeing her father redeemed. Luke at least got to meet the real Anakin Skywalker before he died. Leia got squat. Luke landed on Endor and burned Vader’s body but didn’t invite his sister to the funeral pyre even though she was also on Endor. Nor did Leia get to see her sexy young daddy as a Force ghost at the very end of Return of the Jedi like Luke did. If Luke was secretly bitter that Leia got the better upbringing, as I suspect he was, this must have been his revenge on his sister. What a dick.

But in the end, Leia got a handsome, dashing rogue boyfriend in Han Solo. Since he can't date the girl who turned out to be his sister, Luke is left with no love options except for gay droids or Ewoks. All Luke gets for his troubles are a bunch of Jedi ghosts to follow him around and tell him what to do. I guess everything worked out all right.
Posted by Back of the Head at 4:41 PM