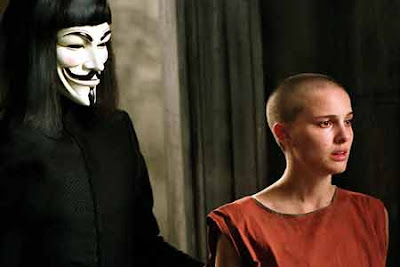 
I wish Stanley Kubrick were alive and had directed V for Vendetta. The graphic novel, written by Alan Moore, is dense, grim, subversive, and cerebral. I'm not certain the modern style of comic book-slash-action movie was the best way to service the material. V for Vendetta should have been this century's A Clockwork Orange. V would have been transcendant with that type of presentation, instead of what it is: good enough, but not great. Still, good enough is good enough. Of course, a Kubrickian V without the Wachowski Brothers' pedigree likely wouldn't have made $26-million on its opening weekend.
V for Vendetta had as many "radical" and "dangerous" political ideas as a Lucky Charms box has red moons, orange stars, green clovers, blue diamonds and purple horse shoes. Most of what the movie had to say was interesting on the surface and compelling if deeply explored, but if you felt like deeply exploring, the movie generally left you on your own after kicking you in the ass to move you along. There were a lot of ideas floating around in the movie. It was like one of those wind chambers that blow money around while you stand in it. The ideas were basically the money and whatever you felt like grabbing was yours to keep. V's basic agenda was reasonably clear and the dynamic backstory of how V and the fascist government of High Chancellor Adam Sutler came into being was explained well.
The movie did certain things better than any comic book - written by Alan Moore or not - could ever do. Evey was much, much hotter in the movie than in the graphic novel. I suppose so was V, for that matter. And Chancellor Sutler too. Rrowrr. The Million V March that climaxed the movie was more powerful on film than even your mind's eye could deliver while reading the graphic novel. And I loved the Benny Hill stuff. Benny Hill music should be in every movie; in Munich, Crash, Brokeback Mountain... Especially Brokeback Mountain.
The most interesting stuff in V For Vendetta was not necessarily V's plan or the relationship between V and Evey. No, the best aspect of V was the B-plot, the investigation by Stephen Rea as the government's man-on-the-job. Assigned to hunt down V, Rea instead slowly unravels the hidden truth behind the creation of both V and the very government V is attempting to destroy. Little by little Rea's belief system in his government crumbles as he uncovers how the government created a biological attack on its own populace to scare them into letting Chancellor Sutler and Norsefire take power.
Hugo Weaving did remarkably empathetic work from behind the rubber Guy Fawkes mask. At times, V speaking bordered dangerously close to the Green Goblin talking to Spider-Man on the rooftop of the first Spidey movie. Weaving succeeded in making you feel and believe V; not just in V's awesome fighting prowess, but his equally awesome domestic prowess. When V cooked Evey breakfast, it looked like a guy in a Halloween mask was hosting a Food Network cooking show. They should have showed V cleaning his bathroom in full costume too, waxing philosophically about the best cleansers to get rid of hard water and mildew stains in the shower.
I think what I was disappointed in the most was the lack of stylization with which V was depicted. There were only two shots that delivered what I was looking for visually: one where V, his black cloak swirling dramatically, leaps onto the church rooftop on his way to kill the bishop - an image straight out of a comic book panel. The second was V spectrally appearing in the shadows as he waited to kill the coroner who'd once imprisoned him. The rest of the time, V sort of just stood around.
As the star billed above the title, Natalie Portman is an easy target for complaints regarding her performance and British accent. To her credit, Portman anchored every scene she was in. She hammered home all the emotion and did the work for two in her scenes with V due to the restrictions of V's mask. She never caught a break, never had a form of laughter or release - she didn't even get to laugh at the Benny Hill stuff.
The sequence where Evey is captured, tortured by V, and discovers the letter of the dead lesbian is the most riveting of the entire picture. Although, going back to an earlier complaint, when Evey is being shaved bald, you feel the sympathy for Evey entirely because of Portman's performance but a great director like the late Kubrick would have gone further, would have been able to make us feel her pain as if it were our heads also being shaved.
Though the reveal was inelegantly handled, I did like V's elaborate ruse of kidnapping and torturing Evey. Although I didn't quite buy V's explanation for torturing her.
V: "Evey, I can't tell you how difficult it was for me to string you up by your wrists, strip you naked and hose you down like you were headed for the gas chamber.  You must believe me: It took everything I had not to hose you from your front. And to use a real hose."
Posted by Back of the Head at 4:48 PM