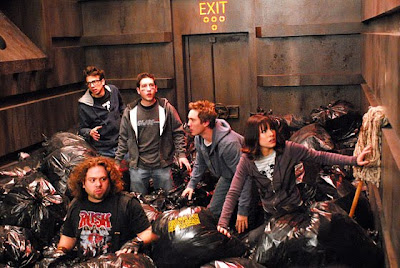 Watching Fanboys in the summer of 2009 post-JJ Abrams' mainstream reinvention of Star Trek, makes Fanboys seem even more anachronistic. A strictly amateur hour (and-a-half) love letter to Star Wars and Star Wars fans by Star Wars fans, Fanboys is about four geeks in 1998 who set off on a cross county journey to break into the Skywalker Ranch and steal a copy of The Phantom Menace and watch it before anyone else. This is presented as a noble pursuit. Two of the actors are decent but the other two, the Screech-like super nerd named Windows and the fat, hairy one named Hutch are unwatchable. The Hutch character is especially repugnant; even worse, he's not funny. Fanboys mines every Star Wars joke and reference under the twin Tatooine suns to no end that's actually funny. Cameos by famous and not-so-famous faces like William Shatner, Seth Rogen (in a challenging dual role, both just awful), Bill Hader, Kevin Smith and Jason Mewes (of course), Jamie King (as a Vegas escort, naturally, what else are attractive girls to Star Wars geeks?), Ray Park, Danny Trejo, Ethan Suplee as Harry Knowles, and Darryl and Roy from The Office make you wonder why they all agreed to be in this piece of garbage in the first place. The road trip itself is a collection of asinine Star Wars jokes and asinine events where Fanboys pretends its unaware that Jay and Silent Bob Strikes Back exists. The geeks (and a slumming Kristen Bell, hired mainly because 1) she's a girl and 2) she's a girl who was willing to wear the Princess Leia slave bikini) have to strip in a gay biker bar and engage in TWO totally retarded arguments and brawls with Star Trek fans. Yeah, about Star Trek, funny thing is right now, more normal people have good things to say about Trek as an entertainment property thanks to JJ Abrams and company. Post-prequels, Star Wars is now even more of a fringe, marginalized, sorry-ass geek affectation.
Posted by Back of the Head at 7:37 PM