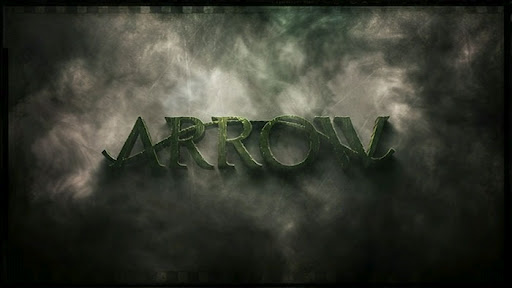 "Who the hell is Felicity Smoak?!"

That incredulous question from Detective Lance when his SCPD techie guy informed him a woman from Queen Consolidated hacked into Merlyn Global's network was the funniest line of dialogue that didn't come from Felicity herself. A deadly serious, deadly soapy, slam bang penultimate Arrow sure needed Felicity's self-aware zingers about her schoolgirl crush on Oliver ("playing doctor") and her "hacking face" to lighten the mood as events careened towards the season one endgame.

The Undertaking is nigh. Malcolm Merlyn tied up loose ends by hooding up as the "Copycat Vigilante" and massacring the scientists and security at Unidac who built the device that will bring forth The Undertaking. Meanwhile, Oliver's one lead towards uncovering what The Undertaking is happens to be his mother, so he takes the direct approach to getting his mom to come clean: he asks her. And then he engineers a phony kidnapping with Diggle dressed as The Hood. The Diggilante got to both question a panicky Moira and smack Oliver around until she spilled the beans about The Undertaking - that Malcolm Merlyn's Unidac device would cause a man-made earthquake that will level the Glades and kill thousands. Then he'd rebuild the Glades, but Moira was skeptical about that second phase in the plan. Moira also revealed Robert Queen's complicity in The Undertaking, which she had to take on after Robert was murdered. Oliver took all this exposition in as well as he could, which is not so well, but it's not everyday you get your mom to confess to being part of a criminal conspiracy to commit mass murder and billions in property damage.

Still, Oliver didn't know where the Unidac device was being stored. One crazy scheme to get half the intel they needed could only be topped by an even crazier scheme to get the rest of the intel. Wherein Diggle somehow infiltrated Merlyn Global as a security guard while Felicity posed as a Big Belly Burger delivery girl and Oliver Queen posed as... Oliver Queen, come to Merlyn Global to meet with Tommy. Their Mission: Impossible had a laugh out loud moment of Oliver smacking the files from a Merlyn employee's hand to get him off their elevator and, warming nerd hearts everywhere, a Star Wars tribute where Oliver and Felicity swung across an elevator shaft like Luke and Leia on the Death Star. Man, I hope for the sake of #Olicity that Oliver and Felicity don't find out in season 3 that they're twin brother and sister.

Oliver told Felicity she had ten minutes to download the files into her Microsoft Surface Windows 8 tablet while he met with Tommy, but his Tommy meeting really only lasted a few seconds. Just a quickie "Hey, old buddy who hates me because I'm a serial killer, Laurel still loves you and I can't be with her while I'm a serial killer, so cut her some slack. All she ever does anymore is show up at the club early in the morning or go bother her dad or anyone else on the cast she normally interacts with and complain about her love life B plot." What I just wrote was probably longer than that Oliver actually said but is an accurate description of what Laurel has been reduced to. Then Oliver leaves Tommy's big ass office and walks right into a comedy of errors with most of the cast for some reason or another in the Merlyn Global building too. Besides Diggle, who cleverly got Felicity out on his own with a rather believable cover of Felicity being a Tommy stalker who broke into the building, Oliver runs smack into Malcolm Merlyn. Then in the lobby, there's Thea and Roy Harper. Why, I was half expecting Helena Bertinelli to wander in the scene for no reason.

Finally, we get the historic first face to face meeting between Oliver Queen and Roy Harper. Thea lets Oliver in on their hare brained scheme to get Roy to meet the Hood and maybe become the Hood's Boy Wonder. Oliver orders Roy to stay away from the Hood or else he'll get himself or worse, Thea, killed. No offer of archery tutelage was made, of course. That didn't sit well with Roy, who's so hardcore into the Hood he spends his free time reading up on the Hood's exploits in Bludhaven on his own probably stolen Microsoft Surface. Oliver did manage to put the fear of Hood in Thea, who called off their search for the Hood. Roy called Oliver "a wimp", but Thea admirably defended the awesomeness of her big brother, who spent five years trapped on an Island, and she doesn't even know the half of it. So Roy called off this "relationship", if you can call it that. I call it more of a girl hanging around a dude who doesn't show the slightest bit of heterosexual interest in her whatsoever. Roy and Thea scenes are basically the Sansa Stark and Loras Tyrell "date" on Game of Thrones this week, only their scenes aren't funny.

Not only did Roy kick Thea to the curb, but Moira got served... divorce papers... from Walter Steele. Walter wasn't remotely happy to be home from his six months in captivity, nor did he love getting face time with Malcolm, the guy who kidnapped him. Walter's no dummy; he had six months to think about how Moira told him without actually telling him he'd be in danger if he looked into the Book of the List and the Queen's Gambit wreckage and then bam, he's a hostage for half a year. Walter bid Moira adieu and headed back to England, presumably. It was a tough week for the Queen women and getting dumped. Hope Walter isn't permanently written off, though. There's a lot more that could be done with that character.

While his mom and sister were losing their men, Oliver suddenly decided he could have his woman after all. Right after more or less telling Tommy to ask Laurel to take him back, Oliver realizes that the months he spent crossing names off the List via arrows in bodies could be at an end. If he manages to stop the Undertaking, he'll have done his dead father a solid and satisfied his dying wish to save Starling City. He could retire from superheroing, like Bruce Wayne, maybe move to Florence. But first he'll need a girl, and he goes right to Laurel's place and tells her it's on. She's like, about time. And they get it on - to the snicker-inducing tune of "Radioactive" - right in front of an open window, right in front of Tommy on the street. No wonder Tommy hates that guy. Total dick move by Oliver.

One dick move deserves another and Oliver has plenty in his quiver, like leaving Laurel's bed in the middle of the night after Diggle calls him. But yes, Oliver must stop The Undertaking. While Diggle went to a warehouse to find the Unidac device, the Hood heads straight for Malcolm Merlyn's office to stick an arrow in him. But Malcolm's one step ahead; once he learned his system was compromised by a mysterious hacker, he had the device moved. (To where? Did everyone suddenly forget the symbol on the Book of Lists was a map of the Glades subway system and the plan was to put the device on a train?) Then Merlyn and the Hood come to blows and Malcolm proceeds to thoroughly kick Oliver's green leather ass. Malcolm beat the crap out of him, broke his bow, and unhooded him to reveal the guylinered face of Oliver Queen!

Five years ago on the Island, Yao Fei's betrayal rounded up Oliver, Slade Wilson, and Shado and delivered them back into Edward Fyers' hands. Oliver even met that kid in the cave who begged for his help a while back, who turns out to be working Fyers' radio. Another mention of Fyers' mysterious employer and we get a quick scene of a mysterious pair of legs belonging to a mysterious 'she'! Which DC Comics lady could this be? Amanda Waller? Carol Ferris? Tess Mercer? Nah. (Forgot to mention the Ted Kord shout out last week.) Ferris definitely exists in this show's universe as Fyers revealed his plan is to use his missiles to shoot down a Ferris Aircraft commercial airliner, which Yao Fei would claim responsibility for. All with the long range plan of destabilizing China's economy. To show he means business, Fyers shot Slade in the leg and Shado in the torso. Like a good compliant prisoner with no choice (but secretly arming Shado with a blade), Yao Fei puts on an airline captain's uniform and shoots the video claiming responsibility for the destruction of the airplane. Then Fyers shoots Yao Fei dead. It would have been funny if Fyers kills Yao Fei, and then his tech guy tells him, "Uh boss, you forgot to hit record on the camera." No take twos for Yao Fei.

Next week, the twenty third and final Arrow in the season one quiver...

In my #Arrow dreams, Malcolm and Oliver trade voice modulators to make funny voices and crack each other up. @amellywood @team_barrowman
— John Orquiola (@BackoftheHead) May 9, 2013