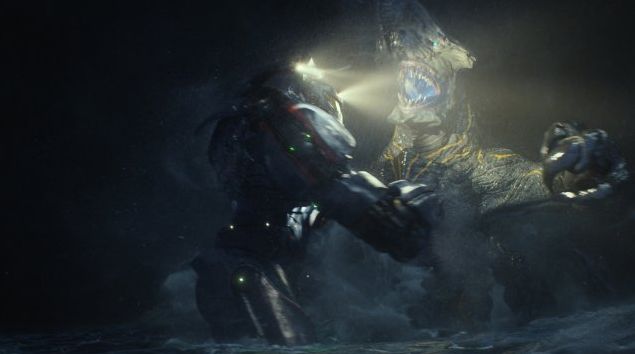 "We are canceling the apocalypse!"

Guillermo Del Toro's heavy mecha wet dream Pacific Rim hits the sweet spot for anyone who ever grew up watching Japanese cartoons of giant robots defending the world against fearsome monsters. Hits it with a rocket punch. A loving, intricately-detailed homage to "mecha" anime and to the Godzilla Vs. genre of monster movies, Pacific Rim posits a terrifying future of just a few years from now where the Earth is routinely invaded by 500 feet tall alien monsters, the "Kaiju" (Japanese for "strange beast"). "To fight monsters" Mankind "created monsters of our own", giant robots called the "Jaegers" (German for "hunter"). This is all helpfully explained at the top of Pacific Rim in an action-packed Jaeger vs. Kaiju prelude that doubles as a relentless download of information about the concept of the film.

A "Breach" at the bottom of the Pacific Ocean opened a doorway to another dimension filled with Kaiju monsters. They rise up out of the Pacific and attack our major cities. All of the world governments pooled their resources to create the Jaegers, developing a technology that requires two pilots to mind-meld with each other and the giant robot to control its functions. The Jaegers were an incredibly successful first line of defense until the Kaiju coming through the Breach became more and more powerful. (Kaiju are ranked by category like hurricanes.) The category 4 Kaiju wreaked havoc on the mighty Jaegers until only four Jaegers remained. The world government decided the Jaegers weren't doing the job anymore and inexplicably put all their marbles into building a giant wall around the Pacific Rim, which the Kaiju just tore through like it was the ticker tape at a finish line. (After the wall fiasco, the government has no other ideas and is never heard from again in the movie.) Meanwhile, any attempt to seal the Breach with a nuclear weapon also met with dismal failure.

This is the shit storm Major Idris Elba finds himself in as Commander of the Jaeger program. Four Jaegers, not enough pilots, no more governmental support, more and more Kaiji penetrating the Breach, and the end of the world counting down. His comic relief science advisers, mathematician Burn Gorman, and Kaiju expert Charlie Day, have grim predictions about a double and triple event: two or three Kaiju coming through the Breach together. Sure enough, this is what happens. Elba recruits burned out Jaeger pilot Charlie Hunnam, whom we watched battle a Kaiju in Pacific Rim's action extravaganza opening sequence, losing his co-pilot brother in the process. Hunnam is one of only two pilots who ever successfully operated a Jaeger and kill a Kaiju solo (guess who the other is) but he's still reeling from the trauma. Nevertheless, Hunnam still has all his skills and sure seems glad to be reunited with his refurbished old Jaeger, Gipsy Danger. All of the Jaegers are different and have goofy code names. There's also Crimson Typhoon, the three-armed Chinese Jaeger operated by Chinese triplets, and Cherno Alpha, the Russian Jaeger piloted by a man-woman team of Russian bears. Since they hardly get any dialogue or character development, the fate of these pilots and their Jaegers isn't hard to surmise.

Meanwhile, Day, taunted as a "Kaiju groupie", is the only one interested in the details of why the Kaiju behave as they do, and how they can penetrate the Breach while humanity's weapons can't. So he gets the crazy idea to use the same mind-meld technology humans use with the Jaegers to communicate with a salvaged Kaiju brain. Day seeks out the world's most famous dealer of recovered Kaiju body parts, Ron Perlman, to purchase a complete Kaiju brain. This leads to a hilarious sequence where Day is convinced the Kaiju know who he is because of the mind meld and that a Kaiju is tearing apart Hong Kong coming to get him. Pacific Rim, which spends most of the movie with the Jaeger pilots in their "Shatterdome" base, uses this time in the "Bone Slums" of Hong Kong to intriguingly show how humanity has taken Kaiju bones and debris and built their cities around them. The survival and coping methods of humanity after a dozen years of Kaiju attacks is interesting stuff Pacific Rim only gives cursory examination to. But then, Del Toro is well-aware what people want to see is the robots fighting the giant monsters, which Del Toro delivers after a great deal of human intrigue at the Jaeger base.

In between being hazed by his resentful fellow Jaeger pilots, Hunnam meets his Jaeger soul mate in Rinko Kikushi, Elba's assistant and right hand. She's skilled in martial arts and obviously capable of piloting a Jaeger but Elba refuses to allow it. (Kikushi embodies the usual Only Woman In The Movie tradition, but in the non-traditional way of being Asian. In fact, no hot Caucasian women seem to exist at all in the world of Pacific Rim. Maybe the Kaiju ate all the hot white girls first?) The gradual reveal of Kikushi's relationship with Elba and the reason for her bond, shown in traumatic flashbacks of Kikushi as a little girl surviving a Kaiju attack on Tokyo, is surprisingly touching and deftly handled. As are the familial bonds of the other Jaeger pilots. Despite plot machinations and setbacks, there's no doubt Hunnam and Kikushi's partnership is a match made in giant robot heaven. For some reason, though, all of the Jaeger pilots are harboring little secrets from each other and engaging in petty rivalries when there are far more pressing giant monster matters to concern themselves with. But then, who are we to question the pressures these Jaeger jockeys are under on a daily basis fighting disgusting giant monsters?

When the Jaegers are deployed and do battle with the Kaiju, Pacific Rim delivers the heavy metal mayhem with aplomb. These battles are awesome spectacles, as the giant robots punch and smash the Kaiju, who rip and tear the Jaeger armor with their horns and claws. Most of the battles take place in the ocean and in the rain, which often obscures clarity but does heighten the tension of not always knowing where and how the Kaiju are attacking. Armored but standing in a wide open control cockpit inside the Jaegers' chest cavities, the pilots rely on imaging screens to "see" what the Jaegers "see", and this seems both limiting and dangerous. Indeed, Jaeger pilots don't live long at all, and as the Kaiju grow more powerful, they seem to have little problem with ripping right into the Jaegers' torsos and snatching the pilots out of their shells. Despite being armed with missiles, plasma cannons and - finally - swords, the Jaegers often seem slow and outmatched, using those weapons sparingly and relying on rock 'em sock 'em robot fisticuffs. Occasionally, Jaegers will pick up ocean liners and use them as clubs. The Kaiju, which spew acid and can even emit an EMP pulse, fight more ferociously with guerilla tactics. The debut of a flying Kaiju really highlighted how ill-equipped and limited Jaegers can be, but this also lead to the single best visual in the movie of Gipsy Danger slashing a Kaiju in mid-air in the best Voltron tradition.

The finale of Pacific Rim is a desperate, last-ditch assault on the Breach personally lead by Elba. A heroic kamikaze in which the last two Jaegers take on three category 5 Kaiju at the bottom of the Pacific Ocean. One thing about the Kaiju, they're vicious enemies, but they are also considerate enough to know when to lay back and not attack in order to let the Jaeger pilots' human melodrama play out. The secret of how to destroy the Breach is discovered by Day, but is it too late to save the world? Listen, of course not. Elba goes out like a hero, Bruce Willis in Armageddon-style, while Hunnam and Kikushi's Jaeger falls into the Breach and actually enters the Kaiju dimension to detonate a nuclear weapon. When the Kaiju see the Gipsy Danger Jaeger drop into their dimension, one imagines they were as confused as the aliens in Independence Day were when Jeff Goldblum and Will Smith popped by their mothership. Do the Kaiju, which we learn have a hive mind, ever stop and think how many of their fellow Kaiju have died crossing over to Earth to be destroyed by Jaegers? I mean, their track record for destroying the Earth is actually pretty lousy when you think about it. The Kaiju have a 100% casualty rate. Oh, it doesn't matter. Thanks to Hunnam and Kikuski, the One to Grow On lesson Pacific Rim really imparts to both human and Kaiju is that when a Caucasian male and an Asian female team up, they can truly work wonders.

Only thing @PacificRim lacks is a scene on a bus a la Almost Famous where all the Jaeger pilots sing "Hold me closer, Gipsy Danger".
— John Orquiola (@BackoftheHead) July 11, 2013

Hope @PacificRim changes things so that when you order Jaeger at a bar, you get 2. Gets you into "the drift" faster that way. @travisbeacham
— John Orquiola (@BackoftheHead) July 11, 2013