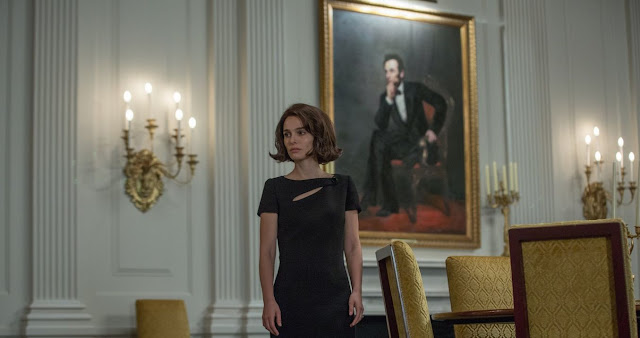 There is a famous photograph taken in the hours after the assassination of President John F. Kennedy of Lyndon Johnson taking the oath of office on Air Force One. To the now-President Johnson's right is his wife Lady Bird, and to his left, shell-shocked, mouth agape, is the newly widowed former First Lady Jackie Kennedy. Director Pablo Larrain's dreamy, artful Jackie casts a sublime Natalie Portman as Jackie Kennedy. In one fatal afternoon in Dallas on November 22, 1963, the United States in a macro sense lost their President and the imagined dream-state of "Camelot" the Kennedys inhabited and cultivated. But for Jackie, what was lost was much more personal and harrowing: she lost her husband, their young children Caroline and John Jr. lost their father, and Jackie lost her home and sense of security, and indeed, for a time, her sense of self.

Given a chance to tell "her side of the story" to a reporter (Billy Crudup) days after the assassination, Jackie labors to come to terms with not just the events of that tragic day -- literally holding her dead husband's brain from falling out of his head as their limousine raced to a hospital -- but with preserving JFK's legacy against the machine of Washington inevitably marching forward. Larrain depicts Jackie's famous television special hosting a tour of the White House, giving us a glimpse of the nervous, hoping-to-please woman behind the cultured facade the First Lady presented to the nation.  The Jack Kennedy she spoke of is the one only she knew; she forgives his displeasure at her spending and especially his womanizing, focusing on what a doting father he was. Much of Jackie revolves around Mrs. Kennedy's planning of her husband's grand funeral, taking cues from the funeral of Abraham Lincoln. Jackie depicts how isolated Jackie Kennedy became; her closest advisor within the family was Robert Kennedy (Peter Sarsgaard), himself mourning his brother and how little their administration was able to accomplish compared to their big dreams. And yet, even in mourning, Jackie reveals Mrs. Kennedy as cunning and calculating to the reporter, seething and lashing out with "off the record" bombs of truth that she "never said."

Though she at times struggles with Jackie's famous accent, poise, and finishing school manners,  Portman persuasively inhabits the dresses, hats, and skin of Jackie Kennedy. The most heartbreaking moments of Jackie are when Jackie stumbles alone within the empty private residence of the White House she must soon vacate. It's moving when she confesses to her priest (John Hurt - in a V For Vendetta reunion where Evie is now looking for solace from Chancellor Sutler) that though she is still a relatively young woman, she fears no man will want a widowed ex-First Lady with two children who also buried two previous children. When her closest confidant Nancy (Greta Gerwig) tries to encourage her that her children are still so lucky to have her, Jackie replies in anguish "That isn't true at all!"; the film is knowingly aware of the further tragedy that would visit her family decades later. One wishes Jackie would take the advice she is given to escape Washington, D.C., "build a fortress in Boston and never look back." Jackie indulges the wistful memory of "Camelot," going so far as to lean a bit heavily on the audio of the musical Jack Kennedy loved as a boy, yet overall, Jackie is an wondrous tribute to the 20th century's most graceful and one of its most important First Ladies.
Posted by Back of the Head at 11:12 AM