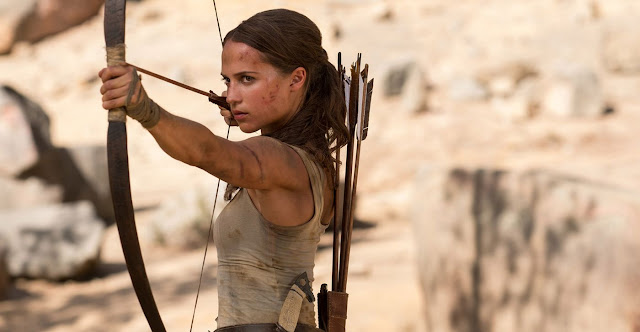 Tomb Raider could be more accurately titled "Lara Croft's Adventures With The 2nd Unit." The reboot of the 2001 and 2004 films that starred Angelina Jolie as the world's most famous British video game heroine (which itself is based on the video game reboot of the 1990s games) is the origin story of the titular Tomb Raider. Here, Lara is a 21 year old launched on her first adventure to find her father Dominic West, missing for 7 years and presumed dead on a mysterious Japanese island. Essentially "Lara Croft Begins", the young Tomb Raider-in-training must travel to that same island to find answers and her destiny. Unfortunately, somewhere along the way to that island, the film lost its director Roar Uthaug and its two credited screenwriters. They must have died en route. With no director and no story to speak of, this left the 2nd unit to stage elaborate stunt shows for Lara to survive to pad out the film's running time.

"I'm not that kind of Croft," Lara says wink-wink in the beginning. Indeed, Alicia Vikander is the best and only thing to watch in Tomb Raider, but she decidedly isn't her predecessor. The commonalities Vikander shares with Jolie are that they are both Academy Award-winners and neither of them are British, which seem to be the two requirements to portray Lara Croft. Lean, chiseled, and constantly injured, Vikander's Lara is neither as fully-formed in bountiful proportions nor in Tomb Raiding skills and gadgetry as Jolie, but she makes up for it in pluck and likeability. Jolie was a perfect video game avatar given flesh and form. In contrast, Vikander's Lara is not the best at everything; she gets her ass kicked a lot and barely scrapes through by the seat of her pants (she also wears pants in the jungle, unlike her predecessor). By the end though, Vikander takes on the more familiar iconography, weaponry, and confidence of Lara Croft, but she's more interesting as a reckless youth in over her head.

The first act of Tomb Raider is its best: unwilling to inherit the vast fortune left behind by her missing father, Lara spends her wayward youth getting pummeled in an MMA gym and eking out a living as an East London bike courier. This section of Tomb Raider surprisingly plays as a welcome (if unintended) homage to Jessica Alba in Dark Angel, wherein Alba's genetically-engineered super soldier also made two-wheeled deliveries while hanging with the eclectic layabouts of Jam Pony Express. Soon, Lara discovers her dad is a big weirdo: the kind who uses his own family crypt (on the grounds of Croft Manor!) as a secret headquarters full of Tomb Raiding paraphenelia. Lord Richard Croft left behind puzzles for his clever daughter to solve, as well as video instructions to destroy all evidence of his quarry: the tomb of an ancient Japanese Empress of Death. Lara decides to use the research to find her father. She jets off to Hong Kong and hires drunk sailor Daniel Wu to charter her a course to the mystery island in the Devil's Triangle. Sure, enough the seas start getting rough and their tiny ship is tossed. The movie's ability to tell a coherent story also goes down with the boat.

Essentially, Lara washes ashore on Lian Yu, the island Oliver Queen was trapped on in Arrow. On the island, instead of Deathstroke, Lara meets the lone American in the film played by Walter Goggins, a dead-eyed villain who has been on the island for 7 years looking for the Japanese Empress' tomb. Why? He doesn't say. He works for a shadowy evil global network called Trinity. Why? He doesn't say. Why does Trinity want what's in the tomb? He doesn't say. To proclaim that every other character in Tomb Raider besides Lara is "underwritten" seems insufficient; it's more like they are "unwritten." Once the 2nd unit takes over the movie, Lara is kidnapped, beaten, chased, shot at, strangled, and survives harrowing cliffhangers that should have killed her. Yet, for everything else not involving frenetic action that Vikander is gamely up for, the island is Tomb Raider's dead zone.

Meanwhile, after 7 years of Goggins and his armed mercenaries leading an Asian death camp, they somehow were unable to find The World's Most Obvious Tomb On A Mountain Which Has Puzzles Set In The Gate until Lara showed up. 7 years?! The island isn't even that big: Lara ran across it in like a minute. Oh, Lara's father is alive, no surprise, and he's a huge disappointment. Lord Croft is no Henry Jones Sr.; he's as boring and empty as the blank pages in Henry's diary. The raiding of the Japanese Empress' tomb is Indiana Jones and the Last Crusade-lite, with Lara solving easy color puzzles while the bad guys are picked apart by the tomb's many death traps. Adding to the sum total of Things That Don't Make Sense, the island is dangerous to get to by boat because storms sink anything that sails towards it, but Trinity can send a helicopter to the island any time it wants and they're greeted by clear, sunny, blue skies.

Tomb Raider utterly fails its star and the audience. The film collapses like the floor of the Japanese Empress' tomb under Lara's dainty weight. Through it all, though, Vikander is imminently watchable and gung ho, even if the stunt team are the only ones in the production offering her any support. If Tomb Raider ignites the desire in any girls or boys in the audience to enter the Tomb Raiding profession, Tomb Raider teaches that the most important skill a Tomb Raider can have is the ability to do one-armed pullups. This will literally save your life every ten minutes despite whatever the 2nd unit can throw at you.
Posted by Back of the Head at 11:19 AM