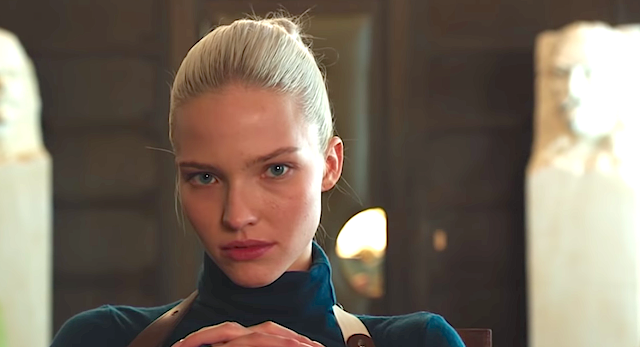 "I work for the KGB, baby," Anna Poliatova (Sasha Luss) snarks to KGB chief Olga (Helen Mirren) at her job interview, but the truth is she doesn't want to. A former junkie and aspiring entrant to the Russian Navy (like her dead Soviet sailor father), Anna was recruited by Dracula Alex Tchenvok (Luke Evans) because she fits the profile for Hot Blonde Female Assassin in an Action Movie. And, since Anna looks like a fashion model, et voilà! She is both! As part of her deal, Anna must spend 5 years (1 in training, 4 in the field) serving her country as a government-sponsored assassin so the KGB sets her up with an ideal cover as a model in Paris. Anna books jobs, she has a Parisian girlfriend named Maud (Lera Abova), and when a shoot wraps, she jumps in a car, takes out a target, and reports her mission status to Olga via payphone. It's a great life but Anna hates it with a passion. She hates being a model and hates being a killer. What's option C for Anna?

Luc Besson's Anna is a stylish, efficient, Cold War assassin's tale. Set in 1990-1991, with flashbacks to 1985, 1987, and 1988 (the film keeps circling back onto itself to explain its various twists and turns), Anna's dangerous world of glastnost keeps her very busy. Though she's a reluctant killer, Anna is highly trained and can take out a room full of soldiers all by her lonesome without any type of superpowers. But what she really wants is to be free and not have her destiny dictated to her by men or women doing the bidding of their governments. Anna's dream is to go to Hawaii and live in the idyllic image of the postcard her father once brought home and stuck on their refrigerator; when she returns from a vacation in St. Tropez, she gives a similar postcard to Olga, who pretends she isn't touched by the gesture. Olga can't and won't make retirement in Hawaii happen for Anna - but the Americans can.

Enter The Scarecrow Leonard Miller (Cillian Murphy), a CIA agent working a long range plan of vengeance against the KGB. In 1985, the new KGB chief, Vassiliev (Eric Godon), asserted himself in his new position by executing 9 CIA agents in Moscow and sending their heads in boxes back to Miller at Langley Gwyneth Paltrow-in-Se7en-style. Five years later, Miller catches onto the tall, foxy, blonde killer the KGB has installed in Paris and sets a trap for Russia's best honeytrap. Anna then becomes a double agent, informing the CIA of her KGB-sponsored activities. Meanwhile, Miller personally walks into Anna's honeytrap himself, unaware that Anna has also had a longstanding relationship with Alex, her man in Moscow. The odd lover out is poor Maud, who is frozen out by Anna and kept totally in the dark (although why Anna remained in her cover in Paris after she eliminated the target she was sent there for in the first place remains a mystery). Soon, Miller makes Anna an offer she can't refuse: kill Vassiliev for him in retribution for the 9 heads-in-boxes and Miller will send her to Hawaii (though she can't pick which island).

What results is an engaging spy thriller held together by the solemn but sincere charisma of Sasha Luss, who is a real-life former Russian model discovered by Luc Besson. Luss's Anna is ably supported by the acting firm of Mirren, Murphy, and Evans, three skilled veterans who make this whole enterprise work. While Anna is a B-movie, it's a sexy and entertaining one that includes a terrific montage of Anna's assassinations set to INXS' "Need You Tonight" and some amusing Eurotrash caricatures who evoke the over-the-top drama queen Chris Tucker played in Besson's The Fifth Element. Amidst the violence, there are indeed a few laughs, like Miller having to give a green light to Anna chopping off the index finger of her target. But the best joke in Anna is right before she kills Vassiliev during a game of chess: the old KGB spymaster compliments Anna on her successes and notes that usually, the KGB doesn't hire beautiful women like her because they cause problems. "That's why we hire the ugly ones," he explains, before adding, "Speaking of Olga..." Obviously, Vassiliev never saw Excalibur and how hot Helen Mirren was - she gave Anna a run for her money back then. Ask Merlin.
Posted by Back of the Head at 3:19 PM