Once Upon a Time... in Hollywood

ONCE UPON A TIME... IN HOLLYWOOD 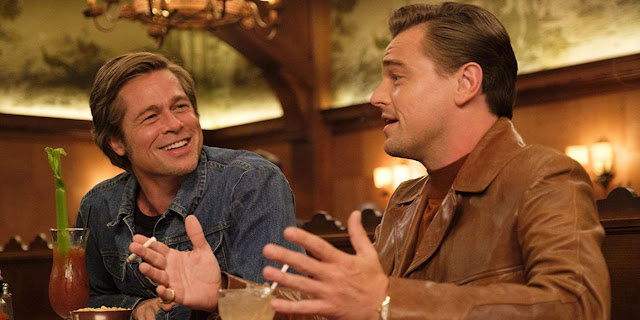 Quentin Tarantino's Once Upon a Time... in Hollywood is a vivid dream of a Tinsel Town that existed once - not quite like that - but we wish it did. A lovingly detailed, freewheeling immersion into the 1969 Los Angeles of Tarantino's memories and desires, Once Upon a Time... is also the most genuinely endearing of the nine feature films he's directed. In fact, not only does Tarantino persuasively recreate the era of 1969 Hollywood, complete with the sights and the sounds of an epic soundtrack, but by the end, Tarantino shockingly does reality one better and saves Sharon Tate (Margot Robbie) from the tragic fate that would befall her in real life.

In Once Upon a Time... in Hollywood, Leonardo DiCaprio stars as Rick Dalton, an actor immensely worried about his place in the burgeoning New Hollywood movement. Rick was the star of a 1950s cowboy show called Bounty Law but he quit to go into the movies, only to get passed over for the lead role in The Great Escape. The guy who got the part? Steve McQueen - something that rankles Rick to this day and partly drove him to alcoholism and endless anxiety. Rick gets a rundown of his career from his agent Martin Schwarz (Al Pacino), who suggests the cure for his career troubles is to spend six months in Rome shooting spaghetti westerns. This confirms it for Rick: "I'm a has-been!" he moans to his best friend and stuntman Cliff Booth (Brad Pitt); Cliff calmly replies, "Don't cry in front of the Mexicans."

Honestly, Rick's not doing so badly. He may no longer be a star but he's a working actor who wisely invested in a nice home in the Hollywood Hills. But he gazes longingly at the house right above him on the hill, which is now owned by Roman Polanski, the director of Rosemary's Baby, and his wife Sharon Tate. If Polanski would just cast Rick in one of his movies, that would be his ticket to movie stardom but alas, he's never met his neighbors. Instead, a hungover Rick goes to his guest spot on a pilot for a Western called Lancer, where all of his anxieties rise up. Rick meets Trudi (Julia Butters), an 8-year-old actor who's wise beyond her years and gives him a better peptalk than any adult he knows. When Rick musters up his talent and wows the cast and crew of Lancer, Trudi rewards him with praise he's been longing for: "That was the best acting I've ever seen in my whole life." Better than any five-star review in the papers, Rick's heart is buoyed and he's "Rick fuckin' Dalton" again. With Rick's arc, Tarantino creates perhaps his most endearing lead character; Dalton may be a drunk and temperamental, but thanks to DiCaprio baring Rick's heart to us, he's someone we truly root for.

Meanwhile, Tarantino pulls a more subtle trick with Sharon Tate; without anywhere close to the amount of dialogue Rick gets, Tarantino's camera follows Sharon through some of her adventures, like partying at the Playboy Mansion. The next day, Sharon goes to Westwood Village to buy a book and she decides to go to the movies to watch herself in The Wrecking Crew with Dean Martin. With her bare feet up on the chair in front of her (Tarantino's foot fetish is on full display in this film), Tate listens delightedly as the audience cheers and laughs at all the right places. Purely through her performance, Robbie makes Tate as endearing as Rick Dalton, and we get a pit in our stomach dreading what is bound to happen to her according to history.

While all that's going on, however, Cliff Booth goes on his own adventure. The stuntman is shunned by the Hollywood community because he's known as "the guy who killed his wife and got away with it". (Whether he did or not is up to the audience to believe.) Hence, Cliff sticks close to his buddy Rick and is satisfied being his driver and gofer, despite his poor career prospects. While Rick is shooting Lancer, Cliff picks up a hippie chick named Pussycat (Margaret Qualley) he's seen hitching around Hollywood Boulevard. Decades older than her, Cliff knows enough not to do anything that'll land him in jail. Besides, his stuntman sense starts tingling when she says she and "others like her" live in Spahn Movie Ranch, where Cliff worked as a stuntman 8 years ago.

At Spahn Ranch, Cliff unwittingly discovers the Charles Manson Family, though he escapes unharmed never realizing who and what they are. One of the most intense set pieces in the film, the Spahn Ranch sequence also pays off the lecture Rick's agent gives him earlier: Schwarz gives Rick a breakdown on how audiences perceive an actor based on the choice of roles they take. At Spahn Ranch, it all comes into focus: the audience knows and sees Brad Pitt is a movie star so, even though he's surrounded by hippies and in danger, the audience never doubts Cliff could whoop those hippies' asses. And that comes to pass in the film's finale.

In real life, the Manson Family breaks into Sharon Tate's home on Cielo Drive and murders her as well as her three friends staying there. Once Upon a Time... in Hollywood brings events right up to the precipice of that grisly tragedy and then inserts an X-factor the real world didn't have: Rick Fuckin' Dalton! In a brazenly bravura action sequence, a very inebriated Dalton and a very high-on-acid Cliff run afoul of the four hippies Manson sent to kill Tate and violently dispatch the hapless interlopers while reaffirming their tried-and-true friendship.

Thus, Quentin Tarantino rewrites history for the better because in his universe, one of the seminal tragedies of 1969 Hollywood never occurred, while he simultaneously reaffirms the power of movie stars. What's more, Dalton's Old Hollywood ended up saving the life of Tate's New Hollywood, while never quite realizing he did so. At the end of Once Upon a Time... in Hollywood, Rick finally meets his next-door neighbor Sharon, opening the gate to possibly getting his dream role in a Roman Polanski picture. With that, Quentin Tarantino closes out his fantastic and fantastical dreamland version of 1969 Hollywood - one of his all-time best films - on an unexpectedly uplifting note of hope. 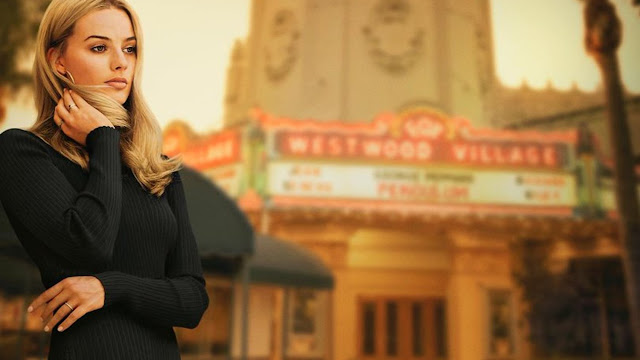