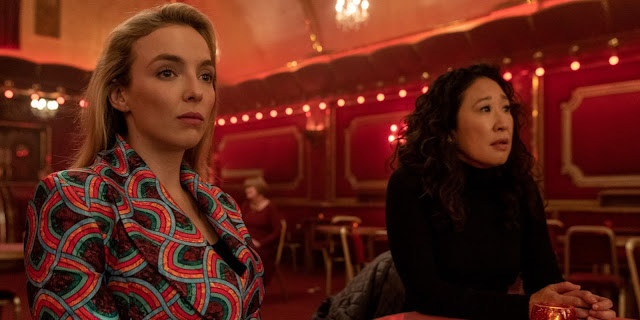 When Carolyn Martens (Fiona Shaw) originally recruited Eve Polastri (Sandra Oh) to MI6 and brought her to what would be their office in Killing Eve season 1, she pointed out to Eve that she once saw a rat drinking from a can of Coke with both hands. "Extraordinary!" Carolyn mused. That's as apt a simile as any to describe my fascination with Killing Eve, which just wrapped its third, and possibly, its most seismic season. The series is long past the giddy novelty and sheer inventiveness of the Phoebe Waller-Bridge-helmed first season, but Killing Eve remains a lurid and florid dream, anchored by the consistently impressive performances of its leads. Jodie Comer is undeniably magnetic and finds never-ending ways to be electifyingly provocative as Villanelle, Sandra Oh is an understated cauldron of barely suppressed rage and desire as Eve, Fiona Shaw's stiff-upper-lipped, calculating calm only grows more riveting as Carolyn, and no one forces himself to swallow down his evident, rampant fears more than Kim Bodnia as Konstanin Vasiliev.

The ending of Killing Eve season 3 haunted me. Eve and Villanelle were kept apart for almost the entire season; except for a brawl and long-awaited kiss on a London bus in episode 3, "Meetings Have Biscuits", the obsessed would-be lovers didn't spend any real time together until the season finale, "Are You Leading Or Am I?" By the time they met up in a dance hall (the site of Villanelle's first murder in London), it seems everything between them has been tentatively forgiven: Villanelle shooting Eve (dead, she thought) in the season 2 finale now seems like a lifetime ago (despite less than a year passing in the series' timeline). By this moment, Villanelle can call Eve for help and she comes running. As the two of them sat together and watched happy couples dancing, everything has changed for them as individuals. Eve has lost her marriage - Niko miraculously and inexplicably survived Dasha Durzan (Harriet Walter) framing Villanelle by stabbing him in the neck with a pitchfork and he told Eve to "piss off" - and she has no career direction.

Meanwhile, Villanelle's entire self-designed world collapsed in season 3. Already deeply unhappy (season 3 forgot that Villanelle got married at the start of the season and she presumably still is), she had an identity crisis that led Villanelle back to Russia to confront her mother Titania (Evgenia Dodina) and then kill her. Villanelle hasn't been the same (how could she be?) and she no longer wants to kill. But being the best assassin money can buy is not only her first, best destiny, but the series poses the question (directly articulated by Carolyn) of what value Villanelle holds to anyone if she's not a killer? Throughout the season, Villanelle, who "was trained to be devastating" and invented a glamorously appealing persona she was quite pleased with in season 1, has only grown sadder and, in a way, behaves in a more childlike and pure way. She wanted a hug from her mother, who was an abusive psychopath incapable of affection. The hug that Villanelle expectedly did get (which stunningly brought her to tears) was from Helene (Camille Cottin), the leader of The Twelve, who only rewarded her for being a "beautiful monster". But is that all Villanelle truly is?

"Do you ever think about the past?" Villanelle asked Eve. "All the time," Eve responded, sadly. "It's all I think about." Indeed. Everything Eve gave up, everything she lost, was because deep down she wanted to. And for Villanelle, her past is lined with blood and corpses, including her own mother's. In their climactic scene at the Tower Bridge, Eve tacitly admitted that she didn't really want her marriage to Niko, their home, or their chicken (and she probably never did) and that the monster inside Villanelle enabled the monster inside Eve. And that Eve wants her to. She doesn't want it to stop, even though she thinks she does.

And with that, Killing Eve asks us to consider, for Villanelle and Eve, and for ourselves in this violently unfair, tumultuously uncertain world we live in, what is the future? What can we really hope for? What is possible for us? What is hopeless but worth reaching for anyway? Before they tried to walk away from each other - and they both stopped and betrayed their agreement never to look back - Eve confessed that every time she visualized her future now, she saw Villanelle's face. "It's a very beautiful face," Villanelle assured her. Killing Eve season 3 sadly comes to the conclusion that Eve and Villanelle are two people swimming against the tide, doomed to drown with each other, their futures forever in doubt. Their two monsters wrecked the other relationships in their lives, and yet, they do have each other, which, in the twisted way that's pure Killing Eve, makes them both lucky. In their world, and in ours, what more can Villanelle and Eve really ask for?
Posted by Back of the Head at 10:01 PM