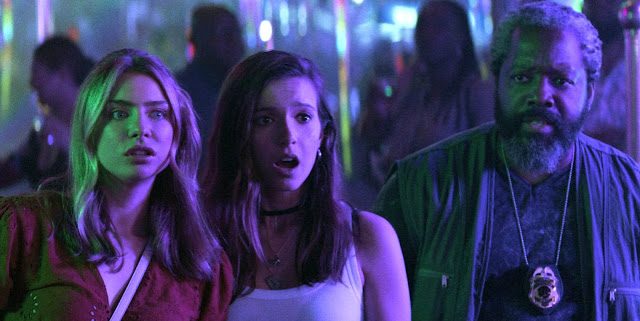 When Teenage Bounty Hunters begins, Bowser Jenkins' (Kadeem Hardison) reaction upon meeting fraternal twins Blair (Anjelica Bette Fellini) and Sterling Wesley (Maddie Phillips) is spot-on: "Y'all just weird." The girls somehow collared a skip thanks to Sterling being an uncanny shot and Blair being as fast and fearless as Vin Diesel before Blair proudly announced that Sterling just got laid (for the first time). Weird is one word to describe Sterling and Blair. Others would be endearing, irrepressible, terrific. Thanks to Bowser, who wonders aloud how he became their Obi-Wan Kenobi, Blair and Sterling become Teenage Bounty Hunters, and they, like this surprisingly fantastic Netflix series, are the great Gen Z hope we've been waiting for. We didn't expect that hope to be in the form of Blair and Sterling but now we wonder how we ever got along without them.

Blair and Sterling are holy creations; the daughters of affluent Atlanta white Republicans, they attend Willingham Academy, a private Christian school, and while they love and respect God, they're curiously open-minded, liberal-leaning, social justice-seeking angels. Well, sometimes. Blair, played by The Gifted season 2 scene-stealer Anjelica Bette Fellini, is headstrong, dramatic, and thinks constantly about sex. Sterling, played by Van Helsing scene-stealer Maddie Phillips, describes herself as a nervous person but she's kind, open, patient, and exceptionally bright. In Teenage Bounty Hunters, the two leads don't steal scenes; rather, Fellini and Phillips own every moment they're on screen, together or apart. Meanwhile, for those of us who really haven't seen Kadeem Hardison since he wore flip-up Harry Potter glasses in A Different World, he's a world-weary but good-hearted revelation as Bowser, who takes a shine to the twins even as they baffle and frustrate him.

Teenage Bounty Hunters promised wit and action but there's far more wit in the crackerjack writing and hilarious and insightful dialogue. Blair and Sterling have a deliriously fun banter where the girls effortlessly sell that they've been as one for their entire lives, and the love they feel for each other is palpable even when they are occasionally at loggerheads. While each episode has a case for the teenage bounty hunters to investigate, the real meat of the story happens at Willingham, where Sterling is at odds with her rival since the fifth grade, April Stevens (a remarkable Devon Hales), the mean girl at school who's hiding a secret that she tragically can't share. But Sterling is on a stunning path of self-awakening, which leads her to ditch her sweet but dim-witted boyfriend Luke (Spencer House from The Society), and her evolving relationship with April is delightfully surprising, deftly handled, and heartfelt.

Meanwhile, Blair has her own romance with Miles (Myles Evans), the African-American valet at their exclusive country club who was hiding his own secret. After rebuffing Miles' interest, Blair becomes interested and then obsessed with him, and eventually, Blair genuinely falls in love. With Miles and Blair's dual relationships, Teenage Bounty Hunters cleverly addresses issues of race and class, with an ingenious inversion taking place between the two. Just as Sterling is endearingly angelic, Blair is endearingly the wrecking ball Miley Cyrus described in her song, and the show also has a lot of fun with how terrible Blair is at interrogating people. But Blair's love story with Miles is as emotional, honest, and real as Sterling's is with April. Teenage Bounty Hunters' greatest trick is to lure you in with humor and then smack you in the feels with how deeply substantive it is.

Yet through all of Blair and Sterling's dramas in school and in the field with Bowser - who has his own relationship trials with his bail bondsman, Yolanda (Shirley Rumierk) - Teenage Bounty Hunters plays the long game with a season-long mystery surrounding the twins' parents and a mysterious Wanted poster of a woman who looks exactly like Sterling and Blair's mother Debbie (Virginia Williams). Teenage Bounty Hunters drops clues we don't even notice at first, but like Blair's uncanny Spider-Sense for her parents lying to her, we discover that there's much more going on with Debbie and her well-heeled husband Anderson (Mackenzie Astin) than meets the eye. I won't ruin the shocking revelations but, by the end of Teenage Bounty Hunters season 1, everything Blair and Sterling ever believed explodes in their faces and we're left as aghast as they are.

There are precious few perfect seasons of television - Veronica Mars season 1 and The Wire season 3 immediately come to mind - but Teenage Bounty Hunters is a perfect show; fully-formed, endlessly surprising, bursting with charm, intelligence, heart, daring, and two of the best young female characters in recent memory. Ending the season with Blair and Sterling's mouths agape (along with mine) while Radiohead's "Idioteque" plays over the credits is a perfect topping on the frozen yogurt. 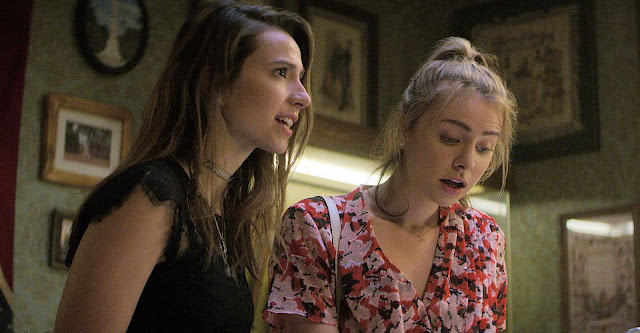 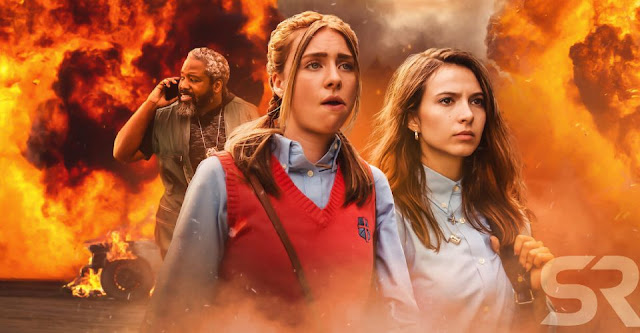 WHAT TO EXPECT FROM TEENAGE BOUNTY HUNTERS SEASON 2 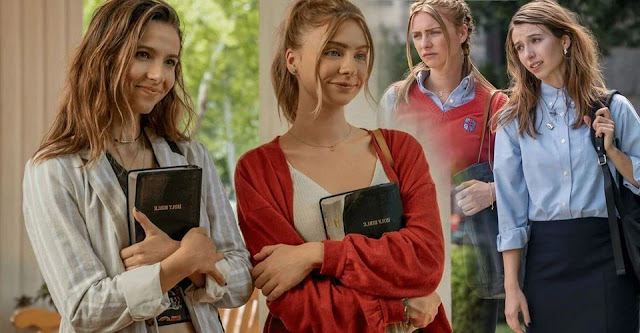 TEENAGE BOUNTY HUNTERS CAST GUIDE:
WHERE YOU RECOGNIZE THE ACTORS FROM 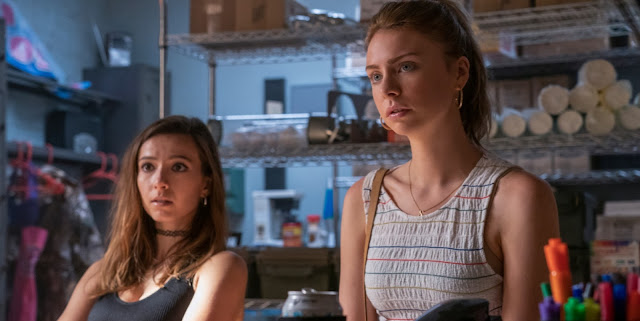