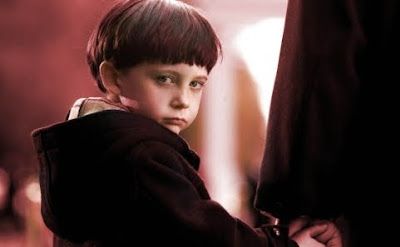 Hey kid, smile once in a while, will ya? You're the goddamned Antichrist. That's gotta be good for some shits and giggles. Nannies hang themselves in your name, priests get impaled, monkeys go apeshit when you visit the zoo, your adoptive mother falls off a third story balcony and ...what? Nothing? Not even a chuckle. C'mon, kid, what's a guy gotta do to amuse Mr. Satan's Baby Boy?

I saw Richard Donner's The Omen a couple of years ago and it was pretty good for its time. This remake by John Moore is the same movie, not so good for our time. Moore changes a few things (9/11 and the tsunami of 2004 are portents of the coming of the Antichrist, says the movie) and not for the better by any means. Everything else plays exactly like the 1976 movie. Except not as good by any means. The plotline of The Omen has always been preposterous, but it seemed less so in the original.

Julia Stiles and Liev Schreiber have no chemistry as husband and wife. Their dialogue together is tedious and lumbering. They are simply not believable as a powerful married couple, he a 34-year old U.S. Ambassador and she a stay-at-home unwitting mom of the Antichrist. When Damien goes all out to kill his mom, there's little sympathy for her, it comes off as a vehicle for inadvertant laughs. Schrieber's Robert Thorn is a steel-jawed dope. The talents of three of the great British character actors, David Thewlis, Pete Postelwaithe, and Michael Gambon (in a cameo) are largely wasted. Mia Farrow's evil nanny gets upstaged every time she's in a scene with Damien's evil dog.

There were numerous opportunities to go beyond the 1976 film and stake new ground but this remake doesn't try. For instance, Stiles complains to Schreiber that she feels like a terrible person for thinking her son is evil and trying to kill her. That's interesting and could have been explored further. Instead, Stiles chooses to turn Damien over to a total stranger who is clearly behaving maliciously while she sits around her house in silent terror waiting for Damien to do her in. While she's waiting, she has spooky dreams of being in a bubble bath and having her wrists slit while people in Halloween masks watch. Then Stiles inexplicably decides to water the plants hanging from the ceiling so she can fall to near death because of Damien. She could have just let the maids handle that chore.

The biggest problem with this story is Damien. Although only five years old, he hardly ever says a word, just glares when the director calls action. It's supposed to be spooky that Damien rarely speaks. That's not like any 5 year old I've encountered; kids hardly ever shut up unless the TV is on. Damien apparently doesn't even watch TV. It's never entirely clear what Damien is thinking or how much he understands about who and what he is. And for being the embodiment of evil walking the Earth, he doesn't seem to enjoy it all that much. Surly glares at the camera don't equal malevolence.

The ending of The Omen is a bit of a cheat. According to the movie, the only way to kill the Antichrist is to stab his body repeatedly with knives, forming the shape of a cross. But neither versions of the movie have any intention of showing a father stab his evil five year old son like that, so it never gets to happen. The ending is exactly the same, with the heartwarming message that evil is among us and it's all a matter of time until we're fucked and dead. Hopefully, in that order, at least.