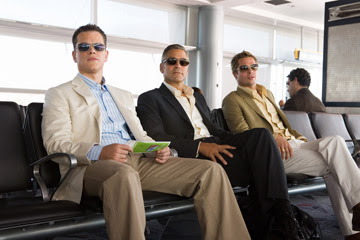 
I love Las Vegas. The high class visage, the lowbrow edge, the casinos, the towering hotels, the beautiful people, the seediness underneath it all, the elegance and the chintz, the excitement, the desperation, the reverence for Sinatra, I just love it there. Ocean's Twelve didn't work for me for a few reasons, one of them being that Danny Ocean and his crew belong in Vegas, not in Europe. Ocean's Thirteen also loves Vegas and reveres Sinatra.

The filmmakers did a phenomenal job with digital effects to intergate Al Pacino's fictional casino into the Las Vegas strip. I was just in Vegas three months ago and I know that there is no red glass spiral tower next to the Aladdin/Planet Hollywood Hotel and Casino, but watching the movie and looking at the numerous shots of Pacino's casino from multiple angles, they could have fooled me.
With Al Pacino as the villain, I enjoyed the obvious odes to The Godfather movies. Elliot Gould has a line where he homages Vito Corleone asking Tom Hagen to tell him Sonny was killed. When Andy Garcia enters the picture to finance Ocean's scheme to take Pacino down, it was fun to see Vincent Mancini Corleone plot against Michael Corleone 17 years after The Godfather III. I also liked the quickie riff on The Bourne Supremacy. There's about 20 seconds of Matt Damon in London where Steven Soderbergh turns on the blue filters and shakes his camera like he's having a seizure, poking fun at Paul Greengrass' shooting style. When Damon wears his prosthetic nose, he's dressed like Dr. No or Dr. Evil, take your pick. There are references to other movies but those are the ones I liked.
Ocean's Thirteen isn't quite the movie Eleven was but it's better than Twelve. I'd have an easier time explaining the plot of Pirates of the Caribbean: At World's End than I would for Ocean's Thirteen. Just about everything in the movie is preposterous. The whole thing with the two giant drills that dug the Chunnel Ocean buys to cause an earthquake under Pacino's casino is beyond ridiculous. Like in the previous films, there's no real tension. Is there ever any doubt George Clooney and company will win at the end? Thirteen also tries to do a little too much; Vincent Cassel shows up and you hardly care. It doesn't really matter either way if he's there or not and if you missed Twelve, you wonder why he's there at all. I did see Twelve and I wondered the same thing. The movie is froth; bright lights, pretty colors, all flash and show with not much underneath. But it's all very entertaining as it's happening.
Just the boys were on board for lucky Thirteen; Julia Roberts and Catherine Zeta-Jones were written out with some quick banter at the beginning. They weren't missed. Without the women, Ocean's Thirteen is less personal. There's no love affair between Danny and Tess or Rusty and Isabelle. Ellen Barkin is the only woman in the movie not counting a few floozies here and there. Normally, I'd complain about the void of women (could have used a few more floozies at least) but that's all right. Sometimes it's more fun to leave the women behind and let the boys be boys.
Posted by Back of the Head at 11:28 PM