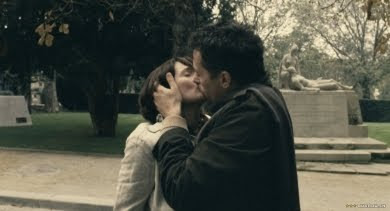 June 12, 2007
Paris, je t'aime ("Paris, I love you") is a series of five minute short films about love in Paris, each one set in and representing a different arrondissement of the city. There were 18 shorts in all, each directed by a different director, including Wes Craven, Alfonso Cuaron, Gus Van Sant, Joel and Ethan Coen, and Alexander Payne and featuring an international cast that included Nick Nolte, Natalie Portman, Elijah Wood, Rufus Sewell, Emily Mortimer, Juliette Binoche, Gerard Depardieu, Maggie Gyllenhaal, Ludivigne Sagnier, Bob Hoskins, Willem Dafoe, and Steve Buschemi. I guess there were supposed to be 20 shorts for the 20 addrondissements of Paris but two fell through. Frankly, they could have cut maybe 14-15 of the ones that did get made and been better off for it.

The best one by far was the final short film directed by Alexander Payne, 14e arrondissement, about a single, middle aged letter carrier from Denver (Margo Martindale) who was visting Paris alone. She narrated her tale in French as a letter to home as she explored the sights of Paris. It was the best written, acted, directed, and conceived short of the entire collection. In five minutes you got to know and feel genuine empathy for this average American woman who is lonely in a foreign land. The ending was simple, evocative, and wonderful. They really saved the best for last. It's a shame we had to endure so much crap to get to it.

Another one of my favorites was one that took place in a cemetary directed by Wes Craven, Père-Lachaise. Emily Mortimer is engaged to Rufus Sewell and questions whether she can marry a man who cannot make her laugh. The ghost of Oscar Wilde makes a pivotal cameo, a gimmick that muddied the waters a bit. But sometimes you just just see a couple of actors on screen who you like so much that their mere presence can lift material that isn't so great into something very watchable. Sewell and Mortimer are two such actors for me. I really enjoy both of them. I'd even enjoy watching them play Battleship against each other for a couple of hours.

Same goes for Ben Garazza in Quartier Latin, Bob Hoskins in Pigalle, and Nick Nolte in Parc Monceau. None of the shorts they were in were very good (the Nolte one was directed by Alfonso Cuaron in a single unbroken shot but was a disappointment, especially in how Ludivigne Sagnier didn't get naked for some reason. Sure they were on a public street but when did that stop her before?). Garazza and Hoskins were especially charismatic in their roles. Those old fogeys sure know how to act.

The Coen Brothers' short, Tuileries, didn't work for me but Steve Buchemi was really good in it. Then there was Faubourg Saint-Denis starring Natalie Portman as an aspiring actress who falls in love with a blind French musician. It wasn't very good but might have been more interesting were they able to develop the characters for more than five minutes (Portman's boyfriend was blind but could run around Paris like Daredevil). But at least having Natalie Portman to look at for five minutes was a welcome distraction from all the other lousy shorts.

It wasn't long into Paris, je t'aime before I started to wish Paris didn't have so many neighborhoods. At its lowest points it felt like being stuck in an amateur foreign short film festival that just wouldn't end. The shorts generally ranged from decent to passable to terrible. Many of them had only faint slivers of story and some didn't even have endings.

The worst for me included one about Elijah Wood running into and falling in love with a vampire, which was an ill-conceived homage to Sin City that was jarringly out of place with the rest of the short stories. The one with Maggie Gyllenhaal as an actress who wanted to hook up with her pot dealer but was stood up seemed like a waste of time and talent.

There were many others that were lame or pointless, but le bottom of le barrel for me was Tour Eiffel, which was about a couple of mimes falling in love. God, I hate mimes. All mimes should be executed.

Paris, je t'aime also ended with an unnecessary coda where it's revealed that some of the characters know each other. It would have been much better if Alexander Payne's short's ending also served as an ending to the entire movie.

If you're interested, there's an even better movie set in Paris with "I love you" in the title. Traci, I Love You, has Traci Lords as an American lured into Paris by a shadowy narrator. Everyone she encounters has all kinds of sex with her until she gets kidnapped and brought to the narrator's underground lair. After Traci is all cleaned up and then endures a lengthy gangbang, the narrator has the funniest line in the movie -- maybe in any movie. When he decides to reveal himself to Traci and finally have sex with her, he declares: "There will be no foreplay!" Christ, I should hope not, after what he'd already put her through.