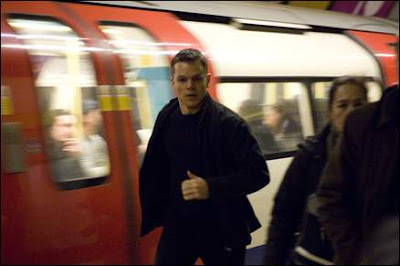 
One word text message review of The Bourne Ultimatum as I left the theatre: "Wow!"

The Bourne Ultimatum is a cinematic perpetual motion machine. The action and Matt Damon himself as Jason Boune are wound tightly then the tension builds and builds until the explosive release. Then a quick breather, a change of city (Moscow, Paris, London, Tangiers, Turin, New York City), and immediately back to more crazy ass action. When you travel the world with James Bond, you see the high class hotels, casinos, and hottest babes of the world's greatest cities. When Jason Bourne is your tour guide, you spend your time in streets, train stations, alleys and tunnels. The girls aren't nearly as hot but there is never, ever a dull moment. Mr. Bond can't make that promise.

Maybe it was during the hyper fight to the death with the Asset in Tangiers where Jason Bourne used a book as a weapon, jamming it into the Asset's throat before choking him to death in the bathroom shower with a hand towel. Or maybe it was when Bourne hot wired a car in the Port Authority parking lot and backed it at high speed off the roof to escape. Or maybe it was the literally smashing finale of the car chase in New York when Bourne's stolen police car rammed and flipped into the car of another Asset. No, it was definitely much earlier than that, in London, when Bourne was nearly as omniscient as Agatha in Minority Report as he helped a reporter for the Guardian evade capture in Waterloo station. That was when I sat back and marveled, "Holy shit, this is fantastic. I'm having an incredible time!"

Even Julia Stiles didn't harsh my Bourne movie buzz, though I didn't get what I've been clamoring for since the first movie: a bullet right through her flat face. (Why do I have it in for Julia Stiles, you ask? Sit through a movie called Down to You one day.) When Stiles tentatively dropped the revelation on Jason Bourne that they were more than just friends, back when he was a young, fresh-faced killer-to-be just signed onto the super-duper top secret and illegal Treadstone project, now renamed Blackbriar, I loved Bourne's lack of reaction. "You don't remember anything?" Stiles asks. No recognition from Bourne, nothing. ("Nope, sorry, not interested, don't care.")

Stiles is no Franka Portente, whose spectre hangs over Jason Bourne along with his quickly resurfacing memories of how he came to be the first and best of Treadstone's super assassins. Portente never should have been killed off at the start of the second Bourne (she's the first to agree) but to the filmmakers' credit, they've taken that boner and made the best of it, making Portente's death a driving force in Bourne's story.

The Bourne Ultimatum is the top shelf of the new order of action films. Director Paul Greengrass delivered one of the best action films of the decade, the best of the three Bourne movies*, and one of the best films of the year. Greengrass took his epileptic shaky camera style and refined it. His camera doesn't shake quite as much as in The Bourne Supremacy and his direction is more confident and sure. There is no fat that needs to be trimmed, nothing extraneous or unnecessary. Storywise, this is the clearest, least confounding of the Bourne movies. But the Bourne identity lies foremost in its action and adrenaline rush and this is where Ultimatum shows its supremacy.

Finally, I love that all three Bourne movies end with Moby's "Extreme Ways", with Ultimatum's remix being more aggressive and in your face. While I'm perfectly happy with this Bourne trilogy and I don't think we need any more, if Greengrass and Damon some day decide they want another go, well then as Moby says in the song:

I would stand in line for this. There's always room in life for this.

While I was getting my haircut this morning, I thought of Jason Bourne.  A curious thing about him:  For a man who spent three years on the run with the CIA trying to kill him at every turn, he manages to keep his buzzcut nice and trim. Johnny Unitas trim.  Bourne has a haircut you can set your watch by.  You'd think he'd get all shaggy and scraggly, but no.  Bourne prioritizes keeping his look clean and neat.  Maybe he has Flowbees hidden in his many safe deposit boxes all across Europe.

After numerous (you read that right, numerous) re-watchings of The Bourne Trilogy over the last five years, I've settled on the preference that my favorite and the best of the three is The Bourne Supremacy. That ending, man. When Jason Bourne breaks into that Russian girl's apartment and apologizes to her for killing her parents -- gets me every time.
Posted by Back of the Head at 4:39 PM