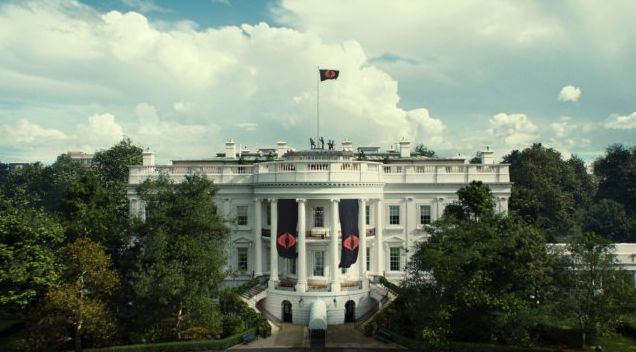 G.I. Joe: Retaliation continues the guns-blazing, forehead-slapping absurdity that is the cinematic tug of war between the heroic G.I. Joe Team and Cobra, the Enemy, a ruthless terrorist organization determined to rule the world. A quick rundown informs us that since "the Nanomite Wars" depicted in the original film, G.I. Joe: The Rise of Cobra, the G.I. Joe Team is currently under the command of Duke (Channing Tatum), and now consists of Roadblock (Dwayne "The Rock" Johnson), Flint (D.J. Cotrona), and Lady Jaye (Adrianne Palicki). Gone with no explanation are the Joes from the previous film General Hawk (Dennis Quaid), Scarlett (Rachel Nichols), and Ripcord (Marlon Wayans). Duke and Ripcord were bosom buddies in The Rise of Cobra, but by Retaliation, Duke has forgotten all about him and all about his love affair with the Baroness (Sienna Miller, also missing and also missed) which was the crux of the original film. Duke's bromance is now with Roadblock, a helicopter gun-toting gumbo chef and father of two, who turns down all his promotions to be Duke's right hand man. Foreshadowing.

While G.I. Joe was established in the prior film as a global strike force consisting of specialists from various nations, this time around the G.I. Joe Team is firmly an all-American squad of soldiers, taking their marching orders from the White House and the Pentagon. Though Cobra Commander and Destro were imprisoned by G.I. Joe at the conclusion of the previous film, the Cobra master of disguise Zartan had replaced the U.S. President (who is nameless, referred to only as "the President") and was well on his way to fulfilling the Cobra master plan. Step one: destroy the G.I. Joe Team, which, it turns out, is easier done than said. As Cobra's retaliation for their previous defeat, the Joes are handily wiped out by Cobra's saboteur Firefly (Ray Stevenson), who comes armed with swarms of lethal nanobot fireflies. Duke is killed off, effectively demoting (or promoting, depending on how you look at it) Channing Tatum from the franchise he started (though a couple of new scenes with Duke and Roadblock were noticeably added to give Tatum's fans a bit more Magic Mike). Only Roadblock, Flint and Lady Jaye survive the slaughter, and must now find a way to deliver their own retaliation and save the world from Cobra's nefarious schemes.

Meanwhile, there are ninjas happening in G.I. Joe. The saga of Snake Eyes (Ray Park) and Storm Shadow (Byung-hun Lee) takes on a new twist in Retaliation, as new light is shed on their backstory as established in The Rise of Cobra. Joining the G.I. Joe Team is a new female ninja named Jinx (Elodie Yung). As ever, the fact that both the Joes and Cobra need and employ ninjas is really the best thing about G.I. Joe. The ninjas are also helpfully color coded: Snake Eyes is black, Storm Shadow is white and Jinx is red. Snake Eyes and Jinx take their ninja orders from the ninja Blind Master (RZA), who orders them to capture Storm Shadow from a fortress halfway up the Himalayan Mountains that looks like the summer home of R'as Al-Ghul and the League of Shadows. Snake Eyes and Jinx are the kind of ninjas that climb all the way to the top of a mountain just to rappel down to the fortress. Also, Jinx seemed to be aware that the evil ninjas in the mountain are wearing red, so she helpfully switched her color code to yellow just for this mission. The ninja sequence in the mountain - the primary selling point of the 3D conversion that kept Retaliation out of theaters for an extra nine months - is the sheerest delight of Retaliation. The movie is never more fun than when Snake Eyes and Jinx are acrobatically sword fighting the red ninjas while swinging across the mountains and passing around an unconscious Storm Shadow in a white body bag.

Where would Retaliation be without the ninjas? A lot more like a standard action movie, which is what the main plot of Roadblock - The Rock at maximum alpha male swagger - leading the Joes to uncover the truth that Zartan is impersonating the U.S. President plays like. Looking for backup, the Joes seek the aid of the man who G.I. Joe was named for: Joe Colton (Bruce Willis), a legendary and ornery soldier who decides to make a running joke of calling Lady Jaye "Brenda" and arms the surviving Joes from the arsenal he calls his house in the suburbs. Some character backstory on Roadblock's hard luck past before becoming a G.I. Joe and Lady Jaye's backstory of enlisting to someday outrank her soldier father is appreciated. The cartoon's love affair between Flint and Lady Jaye is hinted at but Flint never makes a move, despite how jaw-dropping Lady Jaye looks when she's out of her fatigues and in a red cocktail dress (and also out of the red cocktail dress).

Retaliation feels a lot more like G.I. Joe in action set pieces like when Storm Shadow and Firefly bust Cobra Commander out of a secret German underground prison (leaving Destro high and dry - "You're off the team!") and in the climactic finale at Fort Sumter where the ninjas - with Storm Shadow fighting on G.I. Joe's side - battle Cobra soldiers while Roadblock blasts Cobra HISS Tanks and lays the smackdown on Firefly for possession of the Cobra Nuclear Football. Overall, Retaliation is as enjoyably violent and over-the-top as G.I. Joe should be yet seems less cartoony than The Rise of Cobra. But to me, cartoony is the point. Any time guys and girls in crazy costumes with weird codenames are firing futuristic weapons at each other is when Retaliation successfully invokes the G.I. Joe cartoon any boy who grew up in the 1980s holds near and dear.

While The Rock is front and center as the star of the movie, Retaliation's true MVP is Jonathan Pryce in the dual role of Zartan and the imprisoned, beleaguered U.S. President. With an unknown stand-in portraying Cobra Commander due to the absence of Joseph Gordon-Levitt and Destro (Christopher Eccelston) also not in the movie, Pryce rises to the occasion and makes the most of his expanded screen time. Though Arnold Vosloo, who played Zartan in The Rise of Cobra, gets some face time in Retaliation, Pryce does a smashing job acting as Vosloo playing Zartan playing the President. Pryce is obviously having a ball playing "President Crazy", as his chief of staff calls him, whether water boarding the real President or taking total delight in blackmailing the other world leaders at a nuclear disarmament summit. The biggest laughs in the movie are when Pryce declares "We're at war with you and you and you and you and you and you!" and he watches the other world leaders squirm and panic as America's nuclear weapons are launched at their countries while he plays Angry Birds on his iPhone. Pryce also gets some timely one liners in at North Korea's expense. Thanks to Pryce, President Zartan is the greatest crazy U.S. President since Charles Logan in 24.

The sad part is Cobra came so close. By the third act of Retaliation, Cobra had all the cards. President Zartan had blackmailed the other six nuclear-capable nations of the world into surrendering their arms. The Cobra Commander was freed from his imprisonment and had assumed control of the United States Government, placing a half dozen Zeus satellites in orbit to drop bombs on anyone who challenged Cobra's supremacy. Cobra had also wiped out almost the entire G.I. Joe team and completely annihilated London, one upping how their nanobots destroyed the Eiffel Tower in The Rise of Cobra. Cobra flags even fleetingly flew at the White House. Cobra had it all, and they blew it. They totally, completely blew it. It's a good thing Cobra Commander wears a mirrored mask; he's probably too embarrassed now to show his face.
Posted by Back of the Head at 6:29 PM