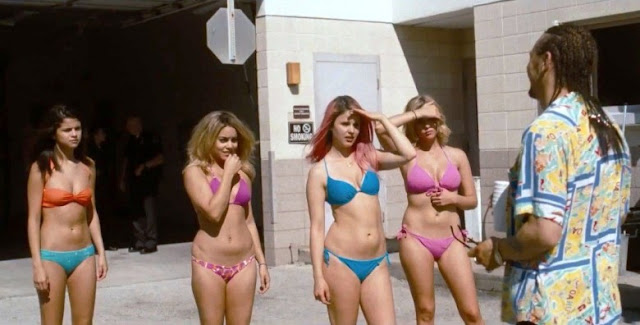 Spring Breakers is everything it advertises itself to be. And more. But also less, if that makes any sense. The promise of nubile young stars 'rebelling' against their Disney Channel and ABC Family restrictions, such as there are, and wantonly flaunting their sexy sexual sexiness is fulfilled. Writer-director Harmony Korine goes for it, as far as his young stars and their management will allow, which is surprisingly pretty far. Spring Breakers spreads the rest of its rather hefty nudity demands all around to the horde of uncredited real spring breakers who binge drink, get naked, and willingly exploit themselves for Korine's camera. It's a Girls Gone Wild video made art-house style. Then Korine shifts gears midway and Spring Breakers becomes a weird, lame-brained pseudo crime film about which gang banger rules the streets of Ass Crack Beach, Florida.

It takes a while to get to spring break, though. First we spend a miserable first act with the four miserable Spring Breakers-to-be: Selena Gomez and Vanessa Hudgens (late of Disney), Ashley Benson (of Pretty Little Liars, and absolutely still one here), and Rachel Korine (wife of the visionary auteur behind the camera). Matriculating, if you can call it that, in a dreary college in a dreary Southern town, they aspire to escape to spring break. They want to change their lives; mainly they want to not be bored. There's not a deep or even interesting thought in any of their heads. The blonde Benson, Hudgens and Korine are practically indistinguishable and are given the basest of traits: Benson seems to have an incurable oral fixation, Hudgens has a thing for protruding her ass all 'sexy-like' and pointing her fingers like a gun, complete with "Ptew! Ptew!" sounds, and Korine seems to be a narcoleptic. Otherwise, they're all pretty much the same character. They even word-for-word tell exact same lies to their mothers when they call home from spring break. The sore thumb is Gomez, raven-haired, Chipmunk-cheeked, and God-fearing, who spends her off-time at Bible classes run by pro wrestler Jeff Jarrett! ("Ha ha, Jesus saves, slap nuts".)

Lacking the money to fund their spring break, Benson, Hudgens and Korine steal a car, rob a diner at gunpoint, and then set the car on fire. "It's like a fucking movie, it's like a fucking video game" is their justification for this and everything they ever do. Gomez is hesitant but she goes along with her friends because spring break is all of their salvation, and to these girls, the ends always justify the means. Once at spring break, the girls never wear anything more than their skimpy bikinis and have the time of their lives, musing about how amazing everything is, how nice everyone is, and how free they all feel in the armpit of Florida. Also, they get drunk. And they get naked. And they do blow off the stomach of a girl on a table. And that gets them arrested. But there's no joy or exhilaration. Korine presents the debauchery of spring break with a jumpy, neon-soaked, psychedelic verve that keeps everything at an ironic distance. Still, the urge to take a shower to wash the putrid off is overwhelming.

The Spring Breakers are set free from the clink by James Franco, the best thing in the movie, or at least the most memorable. Franco plays a skeevy, gold toothed, sometime-rapper/gangbanger named Alien. These four girls suit whatever his purposes are, which mainly require them to be hot and to be impressed with him. In the best scene in the movie, Franco gives a hilarious "Look at my shit!" speech to Benson and Hudgens, boasting about all of his money, guns, and his collection of jorts and baseball caps. Franco is oblivious to how truly pathetic he is, enraptured as he is with himself and his "success" as a self-made survivor of the streets. (When Benson and Hudgens turn the tables on him and make it clear they could kill him if they choose, Franco 'falls in love' with them, or whatever he thinks 'love' is.)  To her credit, Gomez balks at Franco entering and now controlling their lives. She makes the lone rational and intelligent decision anyone in the entire movie makes by getting on a bus and tearfully hightailing it out of spring break.

With Gomez, the only relatively decent person in the movie gone, Spring Breakers becomes a goofy, empty crime saga about Franco and his former best friend's vendetta over who "rules the streets". Benson, Hudgens, and Korine ride along pointlessly with Franco on his crime sprees until reality blasts Korine in the arm with a bullet thanks to a drive-by shooting. Korine also decides she's had enough and gets on the bus back to Dreary University. This leaves Franco with only two interchangeable Spring Breakers left, and a mandate for revenge. It all ends Grand Theft Auto: Vice City-style (and amusingly quickly for Franco), as they mount a guns-blazing assault on their enemy in his mansion. The last thing those gangsters ever saw coming was a couple of chicks in day-glo bikinis and ski masks gunning their whole army down.

Spring Breakers' nouveau cinema plays like low-rent Terrence Malick. Until she gets on the bus back to Bible Town, Gomez's raspy little-girl voiceover narrates the first half of Spring Breakers. Gomez sounds morose even when she's deliriously happy that she's in a motel hot tub being mocked by Hudgens and Benson. Then Franco takes over, with his drugged-out drawl and his simpleton rap lyrics explaining the semblance of a plot and his insipid feelings. "Spring breaaaak! Spring breaaak foreverrrr!!", Franco drones on and on in a perpetual loop. Britney Spears is invoked twice, when the Spring Breakers sing "Baby, One More Time" in a parking lot, and even more depressingly, when her gooey love song "Every Time" plays over a montage of crime, violence and sex. Korine more or less lays the blame for this entire bottom-feeding Spring Breakers generation on Britney's doorstep. By comparison, Franco's rap songs make the lyrics of Spears' pop 'classics' sound like they were written by Shakespeare. All of Spring Breakers is played for detached irony, all of it can be seen as satire. Except satire is supposed to be funny; apparently no one informed Spring Breakers of this. Despite its best art house intentions, in making a film about a subject as inherently empty as spring break, Spring Breakers was inevitably swallowed by that emptiness.
Posted by Back of the Head at 6:58 PM