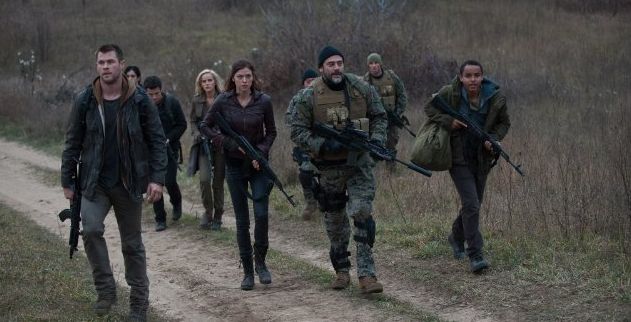 In Red Dawn, North Korea finally catches the United States with its pants down. It's a normal Saturday morning in Spokane, Washington when thousands of North Korean soldiers suddenly paratroop into town and start shooting and imprisoning everyone. A bunch of high school kids get the hell out of dodge and hole up in the woods, led by brothers Chris Hemsworth and Josh Peck. Hemsworth is a former Marine and Iraq war veteran. Peck has the uncanny ability to look like he's about to burst into tears at any moment. They're joined by a larger, more racially diverse group than the handful of white kids who starred in the original 1984 Red Dawn, including Tom Cruise's son Connor Cruise as Token Black. But as in any movie generation, the rules for Minorities Get Killed First still apply. Taking Lea Thompson and Ally Sheedy's places in this remake are Adrianne Palicki (who has the hots for Hemsworth) and Isabel Lucas, Peck's teen dream girlfriend.

When the North Koreans drag their deputy father out and shoot him, Hemsworth and Peck declare war on the Asian invaders, dubbing their rag tag group of rebels "the Wolverines", and fancying themselves as freedom fighters "like the Minutemen". Like in the original, they train in the woods, steal weapons from the North Koreans, and perform hit and run missions before skulking back to the forests like Robin Hood and his Merry Men. The most famous moment of drinking the blood of a deer is recreated but played for a grossout laugh instead of a solemn moment of rebirth. It takes the Wolverines and the movie a while to glean the larger scope of the North Korean invasion, and the movie makes a point that the North Koreans "couldn't have done this alone" despite owning some sort of EMP super weapon. Turns out they had some help from the Russians.

As with the original, the first half of Red Dawn is more interesting than the latter half as it quickly sinks in that the Wolverines can only do so much against the invaders besides be "a symbol" that "makes a difference". Despite their best intentions, the Wolverines die one by one as they're hunted by the head North Korean played by Will Yun Lee, including a rather shocking and ballsy death of a main character. Red Dawn '12 diverges from '84 as the Wolverines meet up with a trio of Marines lead by Jeffrey Dean Morgan. The sinking feeling of dissatisfaction culminates when it becomes clear the Wolverines' final mission is to attack the North Korean headquarters to steal a briefcase that the North Koreans use as their communication network hub. All this just to steal a briefcase. Red Dawn's message that American teenagers will never bow down to the North Koreans will hopefully get through to Kim Jong-Un when he watches it on Blu-ray.
Posted by Back of the Head at 2:25 PM