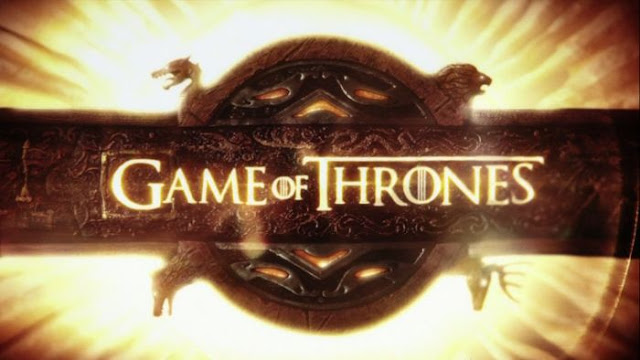 Nice touch for the opening credits to make Winterfell a smoking crater. Also, how sad.

Does time pass differently across the Narrow Sea or do the dragons just grow real, real fast? Not fast enough for Daenerys, regardless. Not a lot of time has passed since the season 2 finale, but it seemed like time progressively passed the further south and east the episode took us.

Beyond the Wall, Sam Tarly got his ass saved from a White Walker by Ghost and the rest of the Night's Watch, then he got yelled at for not sending any ravens. Of course, it doesn't matter if they send a million ravens to King's Landing, the Small Council won't send anyone to the Wall anyway. More importantly, Jon Snow got a lot of rocks thrown at him. Also, Jon met the King Beyond the Wall, Mance Rayder, though he mistakenly knelt to Tormund Giantsbane. Speaking of giants, there are giants hanging out with the Free Folk! And not "giants" like Hagrid, either. These guys are taller than a two story building. But they're shy. Also unlike Hagrid.

Robb Stark took the Northern Army to Harrenhaal and found nothing there except ruins and 200 dead Northmen executed by The Mountain Gregor Clegane. If memory serves, Harrenhaal was given to Littlefinger by Joffrey as a reward for cutting the deal for the Tyrells to ally themselves with the Lannisters, which is what won the Battle of Blackwater. Littlefinger probably wouldn't be thrilled to hear one of the cells of his new castle is housing Catelyn Stark, which is her punishment for freeing Jaime Lannister last season. The Greatjohn is still bitter about that. There's no indication that Robb or anyone in the Stark army is aware that Winterfell was burned to the ground. They also have no idea that Arya was once in Harrenhaal as cupbearer to Tywin Lannister. Man, all Arya had to do was stick around and she would have been reunited with her brother and mother. Instead, she's absent from the episode.

Nice meta moment with Cercei telling Tyrion she'd heard he lost his nose, but no, this is a television show, not the books, and Peter Dinklage needs his nose. He's the Emmy-winning star of the show. Bronn is now a Knight and as a Knight he deserves to be paid twice as much for protecting Tyrion. Seems fair. Tyrion finally got some face time with Tywin and asked for his entitlement, which is lordship over Casterly Rock. He might as well have defecated on Tywin's desk. Tywin tore Tyrion a new one complete with name calling, declarations of hatred, and more name calling. But he promised his son a suitable title, lands, and a wife at some point. But not a whore. Tywin hates whores. Unreasonably hates whores.

Maybe Tywin would like whores if he got to know a couple. Whores seem to be some of the most upstanding people in Westeros, in a way. Why, take Ros and Shae, who finally met. Ros scoped Shae out right away with her whore-dar. It takes a whore to know a whore. But Ros is right; the two of them have climbed fairly high in life considering. Meanwhile, Littlefinger let Sansa know that he saw both Catelyn and Arya in Harrenhaal last season and made a vague promise that he could possibly, maybe, most likely, no promises, but yeah, he will smuggle Sansa out of King's Landing at some point in the future, it could happen.

Davos Seaworth survived the Battle of Blackwater and was rescued by his old pirate friend Salladar Saan, who's slightly bitter he didn't get to go to King's Landing and fuck Cercei. Which was their initial agreement in season 2, episode 2, when he agreed to loan Stannis thirty ships. After some arm twisting and stories of appalling things Stannis and Melissandre have been doing in Dragonstone like burning men alive, Davos returns to Dragonstone and points fingers at the Red Woman. Melissandre plays the "Hey Onion Knight, you talked Stannis into leaving me behind and we lost, so it seems to me if anyone's to blame for the Bungle of Blackwater, it's you" card. Stannis has the man who would have been his Hand tossed in a dungeon. Poor Davos.

Margaery Tyrell, King Joffrey's newest betrothed, is already making a name for herself in King's Landing doing something the Lannisters would never do: hang out in Flea Bottom and make friends with all the poor people, promising them food and protection. Cercei's still holding a grudge about how those very poor people tried to rape and kill the Lannisters last season but even if that didn't happen, Cercei would never deign to sit in a room full of filthy orphans. At a dinner with Joffrey, Margaery, and Ser Loras, Cercei is left grasping for control now that Margaery is clearly angling for her future position as Queen and Joffrey has taken to openly calling his mother old and senile. Cercei's probably kicking herself she didn't invite Sansa to that dinner; at least there would have been someone there Cercei could have made to feel like shit.

Meanwhile, on a boat purchased with everything she took from Xaro Xhoan Daxos in Qarth and carrying a bunch of seasick Dothraki, Daenerys and Jorah Mormont are en route to Astapor to buy some Unsullied. (What a weird sentence.) The Unsullied are said to be the greatest warriors known. They're eunuchs who don't need to sleep or eat and give you a thumbs up when you cut off their nipples. The only comedy in the episode that isn't uttered by Tyrion or Bronn is how Daenerys doesn't know the dirtbag who owns the Unsullied, Kraznys mo Nakloz, keeps calling her a Western whore since Missandei, his translator, is too polite to translate word for word. But being Mother of Dragons means everybody wants to rule her dragons and Daenerys survives another assassination attempt, this time by the Warlocks. (Who decided to come at her in the guise of young Cosette from Les Miserables.) Luckily, Daenerys is saved by the man who was once Lord Commander of her father's Kingsguard and was fired by Cercei in season one: Ser Barristan Selmy. Barristan the Bold! That's a big pick up for Team Daenerys.
Posted by Back of the Head at 10:57 PM