GI JOE: THE RISE OF COBRA 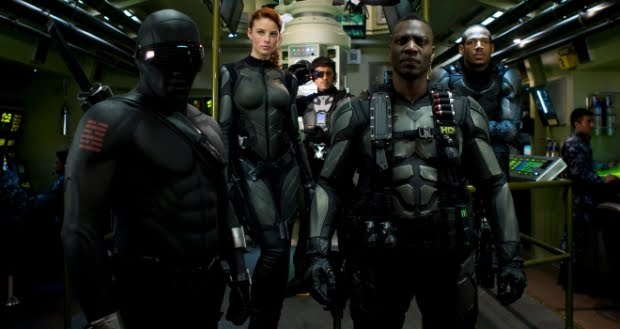 
GI Joe: The Rise of Cobra is the comeback kid of summer 2009. Maligned and dreaded since the movie was announced, GI Joe blasts into movie theaters with guns blazing in all its goofy, preposterous glory. The Rise of Cobra is GI Joe in every way; a love letter to fans of the comic books and cartoon series that entertained millions of children (well, boys) in the 1980's and sold millions of toys for Hasbro. GI Joe: The Rise of Cobra is a better representation of the GI Joe property than either Transformers movie is to the Transformers property. Most importantly, it's a lot of fun and a shockingly good time at the movies.

The savviest move of the production was to hire Marvel comic book writer Larry Hama, who masterminded the GI Joe and Cobra conflict in the 80's and designed the backstories for all of the major characters. Under Hama's supervision, The Rise of Cobra maintains Destro's origins from the comics and cartoon and admirably does the same for virtually its entire cast of characters. Any child of the 80's who memorized the duty cards on the backs of their GI Joe action figure packs will be pleased to hear that General Hawk is still "General Clayton Abernathy", Destro is "James McCullen" descended from the arms dealer Clan McCullen, and the Baronness is "Baronness Anna De Cobray". Snake Eyes (still mute, thankfully) and his villainous counterpart Storm Shadow are still members of the same ninja clan who were rivals as children.

One of the giddy delights of The Rise of Cobra is that, like in the cartoon, the two ninjas have their own private war going on and manage to find the time in the middle of each fracas to engage in chop socky swordfights with each other. And that both the Joes and Cobra felt the need to have ninjas on their team. You gotta have ninjas. What's a war fought without ninjas?

GI Joe has always been about paramilitary war games between two entities, the GI Joe Team and Cobra, a ruthless terrorist organization determined to rule the world. The Rise of Cobra is a prequel of sorts to their famous conflict, introducing all the major players and breezily establishing all the big ideas that (will) drive the saga. As the subtitle indicates, Cobra is in its infancy. The primary antagonist is MARS, the villainous arms conglomerate run by Destro which supplies 70% of the world's weapons to every major country and government. By the end, Cobra does indeed rise, with the Cobra Commander and his infamous hierarchy ready to dessstroy and rule.

GI Joe is also about the arms race between the two factions, each attempting to one-up the other with the latest in high tech gear on the battlefield. In the movie, MARS/Cobra weaponize nanobots contained within four warheads, each with the capability to destroy anything metallic without limits. The nanobots also form the basis of Cobra's mind control and super soldier experiments, creating the Neo-Vipers, who feel no pain. Not to be outdone, the Joes counter with "accelerator suits", armor costing "millions of dollars" that make the Joes stronger, faster, and able to leap tall things in a single bound.

The accelerator suits get their big field test in a balls-to-the-wall chase sequence in Paris where the Joes attempt to capture Storm Shadow and the Baronness before they can launch the nanobot warhead at the Eiffel Tower. A hardcore CGI showcase, the sequence where half of Paris is destroyed is a lot of fun. The Paris sequence even tops a fantastic seige on GI Joe headquarters, where the Baronness, Zartan, and Storm Shadow, with Neo Vipers in tow, inilftrate the Pit to steal the nanobot warheads, which the Joes initially stopped Cobra from stealing (just like in the cartoon when both armies would fight all around the world for pieces of the MASS Device or the Weather Dominator).

The big battle of the third act, where the GI Joe team storms Destro's undersea city in the North Pole in a crazy-ass submarine battle, is even a bit of an in joke as once again GI Joe and Cobra have a showdown (but not a hockey game) at the "roof of the world." A huge shock is the level of violence and the body count, which goes far beyond how no one ever seemed to get shot by the colored lasers in the cartoon. (Cobra lasers are still blue as in the cartoon.) General Hawk nearly becomes a casualty, but sadly, Cover Girl will never drive a tank again. Scarlett's favorite move is launching laser guided arrows from her super crossbow into Neo-Vipers' eyes and exploding their heads. Did I mention Scarlett is my favorite Joe? She wasn't before but she is now.

In between all of the violence and techno-chicanery, there is a welcome amount of humor and some entertaining character development. The cartoon managed to give a lot of the Joes distinct personalities and the movie pleasantly follows suit. Rachel Nichols is cool and brainy as Scarlett, constantly being hit on by Marlon Wayans as Ripcord. Wayans was one of the lightning rods of fanboy complaints when he was cast but he plays just the right tone of comic relief while heroically saving the day when his number is called.

Tons of injokes abound for the older folks in the audience, including cracks about Heavy Duty's "lifelike hair" and "kung fu grip". Duke is referred to as "a real American hero" and the GI Joe team still lives by the mantra that "knowing is half the battle." So much attention is paid to the little quirks and traits of who the Joes are that there is an in joke about Hubba Bubba bubble gum laborously inserted just so communications expert Breaker, who was always depicted blowing bubbles in the comics, has gum to chew in the Paris chase.

The cast, including Dennis Quaid as General Hawk, Christopher Eccelston as Destro, Sienna Miller as the Baronness, and Channing Tatum as Duke, hit just the right notes. Miller was famously quoted that GI Joe "isn't the best acting" she's ever done, but everyone is spot-on for the tone of the movie. Duke is an appropriately heroic all-American jarhead, Miller plays a number of different dimensions as the Baronness, and Eccleston is properly snarling and clever as Destro. And then there is Jason Gordon-Levitt, having a ball as "The Doctor" (not Dr. Mindbender, who gets a shout out). Gordon-Levitt, still romancing audiences in (500) Days of Summer, is The Rise of Cobra's sssecret weapon, as he ssshould be.

The biggest change The Rise of Cobra makes to GI Joe's mythology is to raise the stakes of the personal relationships. In the cartoon, the most famous inter-Joe/Cobra romance was between Lifeline, the pacifist doctor and Zarana, Dreadnok sister of the master of disguise Zartan. The Rise of Cobra takes the Romeo and Juliet idea and promotes it to the leads, creating an all-new romance and backstory for Duke and the Baronness that works remarkably well. Destro still loves the Baronness, as he must, but the way Duke and the Baronness' love story is directly related to the events that give birth to the Cobra Commander is a damned clever rejiggering of the GI Joe vs. Cobra story. This change elevates the conflict between the two factions into a deeply personal, family matter.

The real (American) hero here is director Stephen Sommers. For my money, The Rise of Cobra is Sommers' best movie. (If anyone misses Brendan Fraser from The Mummy, he even pops up in a cameo as Flint.) Sommers truly understands the GI Joe property. His alteration to the mythology where GI Joe is now a NATO-sponsored international battle unit made up of the "alphas" of every nation's military, maintains the crux of what GI Joe is while cleverly widening its scope. He once again relies heavily on computer generated imagery but the CGI is not distracting and adds to the gee-whiz glee of the action.

Sommers helms GI Joe, with its complicated interpersonal backstories and copious techno-absurdity (and let's be honest, the story doesn't make a hell of a lot of sense), like a diehard fanboy coupled with the confidence of a seasoned event movie filmmaker who knows exactly what kind of fun GI Joe is supposed to be. The Rise of Cobra comes to an end just begging for a sequel. Sommers better make another. And next time, I want to hear the battlecries "YO JOE!!" and "COOOBRAAA!!" They were missed.

So now you know. And knowing is half the battle.
Posted by Back of the Head at 2:50 PM