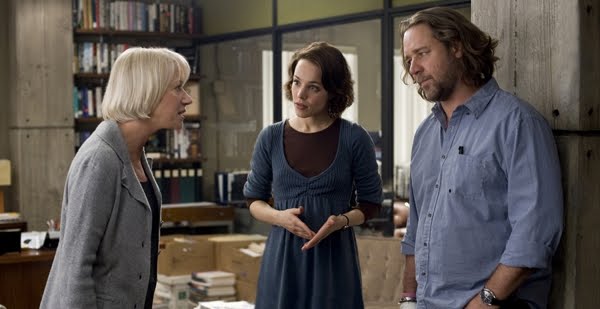 Murder, political corruption, and a slick Hollywood attaboy to the dying state of newspapers and print media. State of Play argues strongly in favor of the importance of newspapers - specifically pavement-pounding, truth-seeking reporters - in uncovering conspiracies within circles of power and influence. Even Rachel McAdams's Capitol Hill gossip blogger learns the error of her insubstantial, trolling-for-website-hit ways and becomes a real reporter by the end. Looking like a scruffy, portly lion, Russell Crowe leads a very fine cast including McAdams, Helen Mirren, Robin Wright Penn, Harry Lennix, and Jason Bateman in a scene stealing walk on. (Now I know what a "gay-rage" is.) Ben Affleck returns in front of the camera (against my wishes) as a callow US Congressman who's unconvincingly supposed to be the same age as and the former college roommate of Crowe. Affleck wastes no time in crying during his second scene, preserving his winning record of bursting into tears in his movies intact. The plot is a slightly cracked Mobius strip; the verisimilitude State of Play works so hard for is tarnished by occasional heapings of patented Hollywood bullshit. Aspects of the plot so closely resemble the events of 24 season 7 that I half expected Jack Bauer and Renee Walker to burst into some scenes and start shooting. The use of Washington DC locations was enjoyable. I liked the last shot, with Crowe and McAdams's matching silhouettes walking off together.
Posted by Back of the Head at 3:54 PM