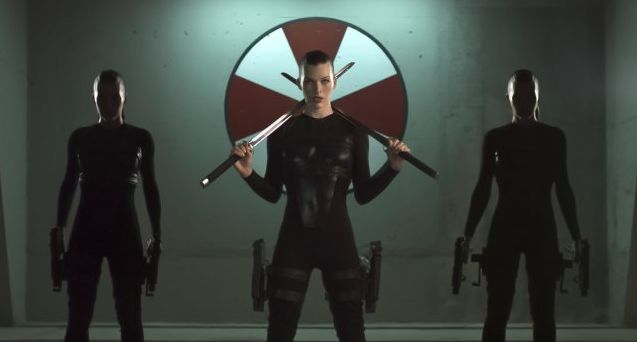 Resident Evil: Afterlife 3D opens with a Million Milla Jovovich March on the evil Umbrella Corporation's secret underground city in Tokyo. The previous entry, Resident Evil: Extinction, left Jovovich's titular heroine Alice with awesome telekinetic powers and a battalion of similarly powered clones to do her bidding. Preceded by Milla's husky tough chick narration which starts with (cue eye rolling) "My name is Alice..." then blah blah blah, concluding with (cue eye rolling) "...they were wrong!", the army of Milla clones sieges the underground city and... manages to get themselves all killed. Though they all have earth-shattering telekinesis, only one of the clones chooses to use hers. The rest resort to guns and samurai swords against the heavily armed Umbrella soldiers, and they slaughter each other wholesale.

Meanwhile, the real Alice proves to be just as incompetent as her clones (they got it from the source). While her clones die in waves, Alice decides to hide inside the escape ship of this movie's main villain, The Worst Agent Smith Impressionist Ever, and when she springs into action she promptly... takes a syringe in the neck that depowers her back to humanity. (Alice was too powerful, it was decided by the filmmakers, so time to bring her back down to size. Also, all those powerful clones had to go, so they chose to wipe them out in the most uncreative way possible). The newly human, newly vulnerable Alice then immediately... survives a plane crash into a mountain, walking away relatively unharmed. And so it goes.

Months later, Alice somehow finagles herself a two seater prop airplane with unlimited fuel and heads to Alaska to find out what happened to her friends from Extinction. The "mystery" of Arcadia, the presumed "infection-free" safe zone introduced in Extinction, then takes Alice to zombie-polluted Los Angeles, where a bunch of stereotypes (a Handsome Black Athlete, a Hispanic Cop, an Australian Starlet, a Sleazy Movie Producer, a Gay Asian Intern, and a Mysterious "Criminal") are holed up in a prison fortress. They all want to get to Arcadia, which it turns out is a freighter on the ocean, and Alice agrees to lead them there... somehow. Meanwhile, their haven isn't so safe as some zombies have learned to burrow into the fortress. On one hand, Afterlife plays with the expected conventions of this type of movie: a massive urban assault vehicle a la Aliens that could be their salvation has no engine, forcing them to come up with a different escape route. Not as appreciated a tease was the laborious set up for a sexy Milla Jovovich shower scene that never happens because zombies attack.

Even though Milla is "human" again, she can still perform ridiculous acrobatics, toss her guns in the air in slow-motion, catch them while somersaulting, and blow zombies away with pinpoint accuracy. While Milla is the alpha lioness of this franchise, she actually gets upstaged in the hot, sexy chick department by Ali Larter. Larter, with her buff arms and whirling strawberry blonde hair, is even sexier when she slow motion poses, especially in the 3D rain as she fights off the Giant Zombie With A Giant Axehammer randomly inserted into the movie. (I suppose because as a video game movie, there has to be a Boss Battle every 30-40 minutes.)  It turns out Larter's character Claire Redfield has a brother, who turns out to be the mysterious inmate, played (naturally) by the guy from Prison Break. When the third act hits, Afterlife starts weeding down who the Important Characters are, killing off everyone who isn't Alice, Claire and Chris Redfield (though Handsome Black Athlete inexplicably survives being zombie-attacked in the tunnels under the prison).

Paul W.S. Anderson, the original auteur of the franchise and proud husband of Jovovich, returned to pen and helm Resident Evil: Afterlife. He proudly utilizes "the latest in state-of-the-art 3D technology" to proudly tell a story devoid of anything resembling logical, rational human behavior. Afterlife can hardly even be considered a story: It's just a bunch of stuff that randomly happens. There's no real beginning and no real ending; one has to search very hard to even find a point. After the requisite two hours of nonsense plot and redundant action, the movie simply decides you've had enough for now and just suddenly stops with a stomach-churning (once it dawns on you this franchise still isn't over!) set up for a fifth Resident Evil. (Though I admit, it was nice to finally find out what happened to Jill Valentine from Resident Evil: Apocalypse - even though Sienna Guillory's credit as Jill Valentine appears before the scene does when she makes her return as Umbrella's new big bad. Way to blow the surprise.)

I've subjected myself to every movie in the Resident Evil franchise and Afterlife is the worst of the lot. Please, someone finally put Alice underground where she belongs.
Posted by Back of the Head at 9:56 AM