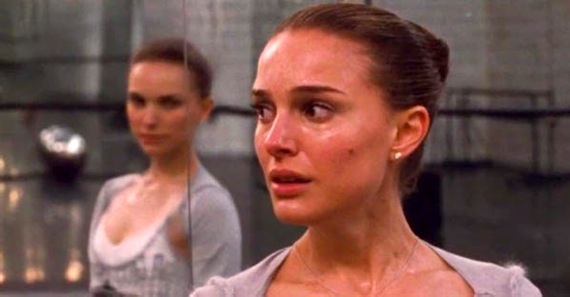 "I just want to be perfect."


Black Swan is amazing - a virtuoso, alarmingly sexy, shockingly crowd pleasing art-film-meets-psychological-thriller about the world of professional ballet. Black Swan showcases director Darren Aronofsky at the apex of his powers as a filmmaker. Aronofsky directs Natalie Portman to a magnificent career-best performance that should reward her with a completely-deserved Best Actress Academy Award.  No longer will Portman be haunted by snide remarks that the best performances she ever gave in films happened before she was old enough to drive: her turn as a 12 year old assassin in Leon: The Professional and her heart-stealing role in Beautiful Girls when she was 14. There was also Closer a decade later but Black Swan blows that out of the water.

Appearing in nearly every scene, her already petite body emaciated into the frame of a ballerina, Portman shocks and awes with her heart-wrenching emotional fragility. She spends most of the film barely holding back a complete psychological breakdown, ultimately in futility. Closed off from any semblance of a normal life, Portman sleeps in a bedroom decorated like a little girl's doll's house. Indeed, she is basically a living doll, treated as such by her frightful, domineering failed artist of a mother, Barbara Hershey. The reaction of Mila Kunis, Portman's cheerfully effervescent only friend and imagined rival, upon meeting her mother was spot-on hilarious. A slimy Vincent Cassel casts Portman, against his better judgment, as the Swan Queen in his production of "Swan Lake", after Portman tearfully pleads for the role ("I just want to be perfect!") and then bites his lip when he takes advantage of her. ("That fucking hurt!" is the biggest laugh in the film.)

As Portman toils and battles against herself to perform as both the delicate White Swan and the dreadful Black Swan, the film dizzyingly explores Portman's deteriorating psyche, invoking horrific supernatural elements as she literally transforms into the Black Swan while releasing her lifelong pent-up fears and sexual frustrations. Sex and desire is matter of fact in Black Swan, embodied by Kunis as the sexually free spirit Portman envies and lusts for as much if not moreso than she does Cassel. Aronofsky and Portman drop jaws with a stunning, in-your-face masturbation scene from Portman, which is topped by a sex scene between Portman and Kunis that's in-your-face in a totally different manner. A ghastly recurring theme is Portman's constantly bleeding fingernails, which Hershey forcibly clips off in one scene, garnering squeals and grimaces from the audience.

As in The Wrestler and the world of professional wrestling, Aronofsky is meticulous in detailing the rituals, physical preparation, and the ordeal ballerinas go through on a daily basis (broken, bleeding toes are just the start of it). Aranofsky also has a bit of fun when introducing two guys Portman and Kunis meet at a club who, appropriately, know nothing about ballet and scoff at the idea they should come to the ballet to see them perform. Nor does Black Swan shy away from the catty backstage jealousies between the ballerinas. Through it all, Natalie Portman heroically carries Black Swan on her tiny, milky shoulders, never compromising her powerful verisimilitude even in the the film's most fantastical moments in her doomed pursuit of her own perfection. Deliriously astounding and unforgettably bravura, Black Swan speaks thrillingly to caution anyone obsessively pursuing a creative endeavor to the point of their own destruction.

I propose the Black Swan drinking game - Take a drink whenever a character touches another's crotch. Two when Natalie touches her own. Three when Mila... you'll know it when you see it.
Posted by Back of the Head at 3:31 PM