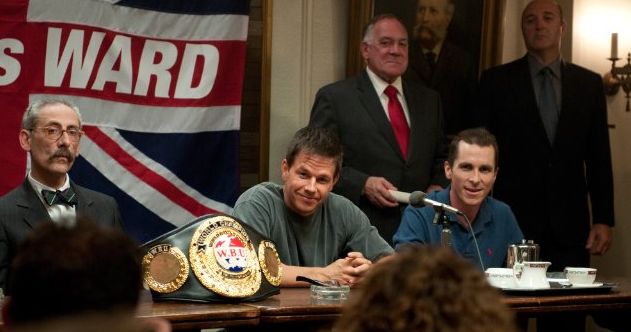 ** SPOILERS **
In The Fighter, which is based on a true story, Mark Wahlberg could very well contend for an Oscar by putting on a clinic on how to suffer in silence. Wahlberg provides a solid, intriguing center in The Fighter as Micky Ward, a blue collar boxer who has spent his whole life domineered by his madhouse of a family and toiling in the shadow of his beloved older brother, Christian Bale. Bale, like the character he plays, Dicky Eklund, "the Pride of Lowell, Massachusetts", is the flashier showman and perpetually the center of attention. Dicky once fought and knocked down Sugar Ray Leonard in a fight seen on HBO (Eklund lost and Leonard may have tripped, two details that get lost as Dicky's local legend is repeated ad nauseam). Now, Dicky is a pathetic crackhead and a criminal who "trains" his brother in between bouts of getting high. Dicky is so detached from reality and enabled all his life by his harpy of a mother (Melissa Leo, Oscar worthy herself) that he believes an HBO documentary camera crew following him around is doing so to chart his nonexistent comeback to boxing instead of what they're really there for, an expose on crack addiction. Bale, scrawny, sweaty, and feral, tends to dominate The Fighter the way his character perpetually steals attention from Wahlberg. It's a blistering performance by Bale, gunning for an Oscar nod. But it's the understated Wahlberg, stoic but needy, torn between his deep love for his brother and his desire to get out from the toxic pit of his family, who truly impresses. The Fighter is steeped in the local colah of Lowell, Mass. Wahlberg and Bale have different fathers and are related to a grotesque gaggle of sisters who all look in-bred, with their matching Walmart outfits and crunchy mall-hairstyles. Their sisters despise Wahlberg's fiery girlfriend, Amy Adams. They claim she thinks she's "so superior because she went to college", never mind that Adams dropped out and works as a bartender. Adams also has bigger aspirations than being a Lowell townie; in Wahlberg, she finds a kindred spirit and the pick of a rotten litter.  The electric, fascinating family drama of The Fighter's first half gives way to a more conventional feel-good conclusion as Bale gets clean in prison and the family more or less settles their differences to support Wahlberg. The boxing The Fighter presents is rather straightforward; a simple "head-body-head-body" fighting style Bale teaches Wahlberg takes Wahlberg to his in-ring victories. A lot of strategizing happens for Wahlberg's early opponents but none is made for his opponent in the big championship fight at the end. It's also curious how these blue collar Lowell townies are all able to watch Wahlberg's fights on HBO despite the lack of cable boxes on their beat up television sets. (I get it - they all steal cable.) When Walhberg wins his championship at the end, he and his entire family start kissing each other in the ring - it's almost like that Saturday Night Live sketch about the family that makes out with each other. At its core, The Fighter is a fairly formulaic story; the strong performances by the actors lead by Wahlberg, Bale, and Adams, and the direction by David O. Russell elevate The Fighter above the basic material into a wicked crowd pleaser. But do me a favor, Mark - don't say hi to your mother for me.
Posted by Back of the Head at 3:15 PM