You've Got to "Prey" Just To Make It Today 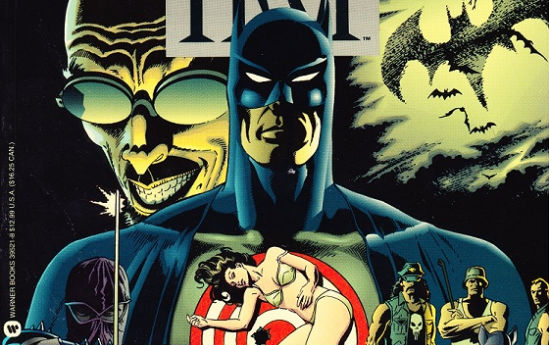 A big rumor going around about David Goyer basing the screenplay for The Dark Knight Rises on "Prey" from Batman: Legends of the Dark Knight lead me to dig up my issues from my longboxes in storage.

"Prey", written by Doug Moench and drawn by Paul Gulacy and Terry Austin, was published back in 1991 so it's been 19 years since I read it. I vaguely remembered the story besides remembering I liked it back then and thought it was good. My memory was either a little faulty or my standards have risen since I was 15. (Both.) Either way, I wasn't too impressed with "Prey" overall.

Several elements of "Prey" lend themselves nicely to pick up where The Dark Knight left off: the alliance between Batman and Jim Gordon that now has to be kept secret from everyone, Batman being hunted by the police as a vigilante, Batman needing a new Batmobile, and Dr. Hugo Strange becoming the city's expert analrapist on Batman while secretly wishing to be him and replace him.

"Prey" is also more blatantly sexual than I remember, especially for the time. I mean, 1991 was one of the breakthrough years of in-your-face sex in comics, especially at Marvel, where Jim Lee was regularly drawing the X-Men and especially Rogue and Psylocke naked every issue. In "Prey", they go all out with the sex and nudity: Lots of big boobied naked chicks in every issue, Strange has a heavily implied sexual relationship with a Real Doll. Strange then kidnaps the Mayor's daughter and holds her handcuffed in bed in her lingerie. They didn't show Strange raping her but you can presume he did. Then there's Catwoman, who's in the story for no real reason other than as a plot device and to occasionally get naked. That sordid sort of sexy stuff hasn't been in Christopher Nolan's past repertoire and probably won't make it into Rises.

Ultimately, "Prey" isn't anywhere near as good as I remembered it; it's overly melodramatic, the story falls apart in the second half (it's never clear why Batman didn't immediately suspect Strange and why he didn't monitor Strange's penthouse until the end), and the sub-villain, "the Night-Scourge", who is the cop in command of the Batman Task Force Strange hypnotizes, really sucks. Really, really sucks. He's just a grunt in a ski mask carrying samurai swords.

In the way elements of the stories involving The Joker, Boss Thorne, and Silver St. Cloud in Batman: Strange Apparitions* (which also starred Hugo Strange) informed The Joker, Boss Carl Grissom, and Vicki Vale in Batman (1989), there's stuff in "Prey" that could definitely - if the rumors are true - be lifted and vastly improved upon by Christopher Nolan.
Then again, all these rumors about "Prey" being a source material for The Dark Knight Rises could be a lot of Bat-hooey and this whole thing is moot.
*Strange Apparitions is a collection of 1970s Batman stories I do recommend. They're dated, yes, but really high quality stories for the era, and you can see that the wide streets and tall (but not gothic) buildings of the 1970s Gotham City informed Chris Nolan's Chicago-Gotham City. In fact, there are a ton of similarities to Batman in the 1970s and Chris Nolan's Batman movies, including Batman living in Wayne Tower with a Batcave under the city like he had in The Dark Knight.
Posted by Back of the Head at 12:26 PM