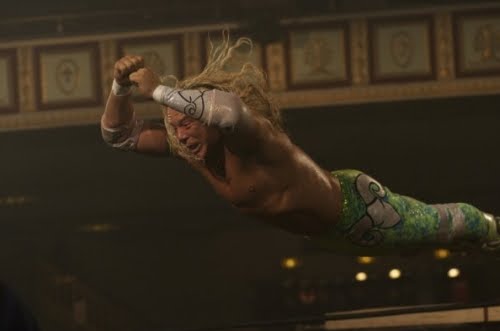 A couple of my favorite moments in Darren Aronofsky's The Wrestler – one of the best films of 2008 and the greatest pro wrestling film ever made - involve the kids who live next door to Randy "The Ram" Robinson's trailer. When he's woken up from sleeping in his Dodge Ram, Randy bursts out of the back door and “wrestles” the kids, giving one a chokeslam on the ground. Later, he invites another kid over to play Wrestle Jam on his 8 bit Nintendo. While the kid complains about how ancient the game is and baffles Randy about Call of Duty 4, Randy beats the kid in the game and invites him to a rematch. It's a perfect little moment if you understand pro wrestling: Randy beat the kid in the first match and he wanted the kid to win the rematch. The kid put him over, now he'll put the kid over. That's pro wrestling.

If Randy “The Ram” Robinson were real, I'd have seen him wrestle live probably dozens of times. As it was, I actually struggled not to call the action during the matches in the film. To the chagrin of anyone who's ever sat in the row in front of us at a wrestling show, my friends and I love to provide funny (we think) color commentary, usually quoting Gorilla Monsoon, Bobby “The Brain” Heenan, Jim Ross, Jerry “The King” Lawler, and Vince McMahon when he was “just an announcer” in the 80's. The Ram's dive over the top rope onto the Ayatollah deserved a McMahon-esque “Whatamaneuver!” When the Ram stuffed the Necro Butcher into a garbage can before hitting him with some guy's fake leg (which really happened in a Shawn Michaels vs. Diesel match on pay per view in 1996), it would have been a perfect time for a Monsoon-esque “That piece of garbage!” And in the final moments of the movie when the Ram's weak heart was giving out on him, but he still climbed the top rope (“Quick as a cat!”, I did joke) to deliver his Ram Jam finisher, Vince McMahon might have been heard to worriedly exclaim, “Let it be over! Let it be over!”

The Wrestler blatantly exposes the pro wrestling business. It's not the first movie to do so as exposes about professional wrestling have become commonplace since the late-1990's. To its credit, The Wrestler depicts professional wrestling with verisimilitude, especially on the level of weekend independent wrestling shows run out of high school gyms and VFW halls. It's all there, just how it really is: The audience made up mostly of grungy men, the occasional hot-looking girls, and the …how you say… retards. (With some exceptions, ahem ). The seedy-looking promoters with questionable grasps of grammar (“Two words: Re. Match.”) The backstage areas, usually classrooms or VFW lounges, populated by hulking dudes in spandex possessed of various levels of talent, most of whom will never make it to McMahon's WWE. These are, in wrestling vernacular, “the boys”. The boys have camaraderie unique in any walk of life, involving them privately deciding how they plan to make it look like they're hurting each other while doing their best not to hurt each other before they “go home” and perform the predetermined finish of their match.

The use of real-life magazines like Pro Wrestling Illustrated in the opening credit montage detailing Randy “The Ram” Robinson's main event-level career in the 1980's was appreciated. We are also shown in great detail how to create a razor blade, how it's hidden, and when it gets used in a match by a wrestler to cut himself (“draw color”). That moment reminded me of when Quentin Tarantino showed step by step how to freebase heroin in Pulp Fiction. Kids, don't try this at home.

Apparently, Vince McMahon screened The Wrestler privately and was said to have “hated” it. It would have surprised me more if he didn't. The story of this broken down old wrestler with a shattered family life who will wrestle until it literally kills him is not how McMahon wants his business seen by the general public. The Wrestler clashes with WWE's image of perfect, muscled physiques; men and women in their physical prime who entertain thousands of adoring fans, accompanied by state of the art lights, music, video and pyrotechnics. And yet every one backstage in WWE knows someone, or is actually related to someone, similar to Randy “The Ram” Robinson. It's a cautionary tale any professional wrestler has heard of from the “old-timers” or seen with their own eyes.

Something else McMahon might not be too crazy about is how, in the relationship between Randy “The Ram” and Marisa Tomei's stripper, The Wrestler cannily equates professional wrestling with strip clubs. The two businesses do have a number of qualities in common: In both professions, the performers use fake names and guard their true lives from their fans/clients. (There is a clever reversal where Randy, who despises his real name Robin Ramzinski, spends his waking life always trying to be Randy “The Ram” while Tomei's dream is to stop being “Cassidy” the stripper and just be Pam, full-time mom to her 9 year old son.) The Wrestler depicts the many cosmetic duties of a pro wrestler, from streaking his hair, to shaving his upper body hairless, to tanning. Wrestlers have to sell their “look” just as much as a stripper would, and sex appeal does play a large role in wrestling.

Indeed, both professions are about physically offering audience gratification, both professions tend to (with exceptions, ahem ) attract the less-desirable types in our society, and both professions are not looked upon favorably by polite society. ( The Wrestler provides a mouth piece for those who look down upon pro wrestling in Randy's boss at the grocery store, who calls his weekend passion “sitting on other guys' faces.” Meanwhile, Randy catches him watching porn on his work laptop.) McMahon presents his WWE as entertainment for the whole family the equal of anything Hollywood has to offer, but no matter how glossy WWE is (and to be clear, I love WWE) they can't escape the grimy and unfortunate aspects of their business.

There is humor in The Wrestler, such as the scene where Randy (scowling because his nametag says Robin) enjoys himself working at the supermarket deli counter, calling his ugly and old customers “good lookin'” and “spring chicken”. There is a nice laugh when Randy gives Pam a Randy “The Ram” collectors item action figure "worth $300". (“Really?” “No.”) Anyone familiar with the predilection wrestlers have of wearing T-shirts with their own names and logo on them was amused when Randy picked out a shirt for his daughter and thought she'd love it because it has an S on it. (“The S stands for Stephanie!”) I appreciated Randy's love of 80's hair metal and his loathing of “that pussy Cobain ” and the 1990's. I thought it was funny how much the Ayatollah broke "kayfabe" during the last match in the film, showing his genuine concern for his "hated" opponent. I also loved the “shopping for the hardcore match” scene where Randy and one of his co-workers hit a supermarket and look for “plunder” to use in their match.

The hardcore match itself was not funny. It was bloody and brutal, although the exchange backstage about using staple guns and mouse traps in the match was amusing. I was surprised by the gasps and shock in the theater during the hardcore match, until I remembered most people in the audience are not wrestling fans. To me, guys wrapping each other in barbed wire, getting thrown through tables, and stumbling to locker room with thumbtacks stuck to their back and ass is old hat.


I see now I've written well over 1,200 words and not mentioned Mickey Rourke by name. Rourke is incredible; delivering the year's most worthy Best Actor Academy Award performance. From years of real-life hard living, Rourke does look like a broken down professional wrestler. He amazingly performs a great deal of his own stunts in the wrestling match scenes. Most importantly, Rourke creates Randy “The Ram” Robinson from the inside-out. His attempts to reunite with his estranged daughter Stephanie (Evan Rachel Wood) lead to the most raw, moving moment of the film when Randy called himself “an old broken down piece of meat” and asked his daughter not to hate him. (If only Stephanie would have listened to the really good explanation as to why he missed their planned dinner date before she evicted him from her life: he met a skank in a bar, did some blow, fucked her in a rest room, and woke up in her bed surrounded by posters of firemen. It could happen to anybody!)

Rourke's Wrestler is a heartbreaking performance of a suffering man desperate for love and acceptance who defeats himself in every aspect of life except when he's in the ring wrestling in front of a couple of hundred people chanting his name.
Posted by Back of the Head at 3:30 PM