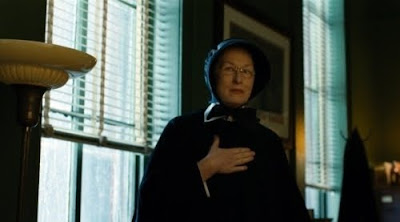 The few years I spent in Catholic school growing up instilled in me a healthy ...what's the word?... fear of nuns. Priests? Priests were cool (save the jokes, folks) but nuns, not so much. Nuns were the ballbreakers of the Catholic schools. As nuns from Hell go, Meryl Streep plays a doozy. And though Doubt is set in 1964, the story could have been ripped from the 6 o'clock news of just a few years ago, when sordid tales of priests tickling young boys' balls and not busting them like the nuns were rampant. Caught in the middle of the war of uncertain conviction between Sister Streep and Father Phillip Seymour Hoffman is Amy Adams, a sweet-hearted young nun in Streep's Catholic school. Perhaps the great tragedy in Doubt is how Streep's intolerant hard-assedness creeps into Adams's soul and she gets pulled more and more towards Streep's methodology. Doubt gets the details just right of Catholic school and being an altar boy. It all looked very familar to what I remember growing up. The acting is superb, though the writing and blocking is very stagey and the camera angles strangely tilt so that Doubt looks like the old 60's Batman TV show.
Posted by Back of the Head at 11:17 AM