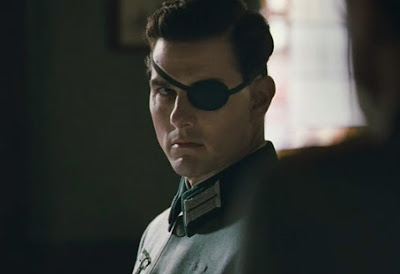 “The last time I saw Hitler, we had dinner and laughed about it.” – Abe Simpson


The end titles of Valkyrie inform us that numerous attempts were made by conspirators in the Nazi High Command to assassinate the Fuhrer. The plot lead by Tom Cruise apparently came closest to achieving that goal. Since history records… hold on, let me look this up… the Allies won World War II (I'll be damned!), Valkyrie by its very conception immediately places itself in a situation where we march towards an inevitable conclusion where the protagonists can't possibly succeed. This different from something like Titanic; we all know the boat sinks but we didn't know if Kate and Leo would get off the boat together. In Valkyrie, there was no doubt that A) Cruise and his friends would fail and B) since this is Nazi Germany, their Nazi hearts would not go on.

Tom Cruise delivers a performance quite unlike anything he's done in the past. Donning an eye patch to cover his missing left eye, lacking a right hand and two of the fingers on his left, Cruise is a stiff-upper-lipped powder keg that never quite goes off until the end, when his one good eye is staring at the business end of Nazi rifles. Cruise never once flashes his trademark grin. He delivers his dialogue in rasps and whispers. His one moment of levity was how he recruited Eddie Izzard to the Kill Hitler Cause by dropping his fake eye in Izzard's drink.

Cruise becomes the leader of a secret cabal of the some of the finest actors in movies today, including Terence Stamp, Kenneth Branagh, Bill Nighy, and Tom Wilkerson; all tightly-wound in their Nazi best. They're the Justice League of Germany, banded together to bring down the greatest super villain of the 20th century. Valkyrie is effective in showing that these were flawed, frightened men trying to do what they thought was right. Some of them saw the removal of the Fuhrer as an opportunity to ascend to power, others were simply trying to do what was best for the Fatherland. There's an amusing line during one of their many secret back-room arguments about how badly their plot was going; that the Allies would hardly be inclined to negotiate with them if they're already in Berlin before they got their act together. Whatever their intentions were, these men were simply not up to the task they set out for themselves, nor did it seem like they could have stabilized Germany if they had succeeded in killing their Fuhrer.

The plot itself was a crackerjack, fiendishly clever in its intricacies. Step one, the actual Kill Hitler part, involved low-tech explosives in leather satchels and basically hanging out with Hitler in his bunker. Step two was infinitely more complicated. This required Cruise and company to take control of High Command, bluffing everyone who runs panicked into their office, while tricking the SS into performing the coup and controlling the army for them.

Valkyrie's last half hour was its best, as Cruise personally dropped da bomb on Hitler and flew back to Germany to assume control of the country. Except Cruise blew it. He didn't get the job done, all the while behaving in the most suspicious manner possible. His folly becomes more exponentially more pitiful (“I saw the blast!”) when it becomes clear Hitler was barely harmed by the explosion. Then the SS figures out they were being played and the jig was up. Cruise and the Justice League watch powerlessly as all their lofty, well-meaningness comes crashing down on their heads. If Peter Sellers were alive, no doubt he would taken the same material in Valkyrie and come up with a hilarious satire. As such, Valkyrie was a comedy of errors without any comedy

Hitler himself (David Bamber) was a disappointment. If there's one bit of praise one can give Adolph Hitler, it's that he was charismatic. This is a man who gave rousing speeches that inflamed the hearts and minds of Germany to follow him in a racist, genocidal quest for world domination. You'd never know it from the way Hitler was portrayed in Valkyrie, as a withering old mope brushing the bangs from his forehead. Sure, things were going badly for him by 1944 and Hitler likely would have lacked the verve of a decade prior, but the opportunity was missed entirely to showcase why Hitler was the Fuhrer. At the end of Valkyrie, Hitler delivers one of his famed radio addresses to reassure Germany that he was alive and the plot to kill him failed. Instead of being inflamed in rage and righteousness, he sounded like grossvater offering every Nazi a piece of Werther's Caramels.
Posted by Back of the Head at 5:06 PM